The source of this is unusual as it’s a Mac site, but it matches up with rumors we’ve been hearing in other places in the last couple of weeks.

and BTW: This also may be the debut of Samsungs’ latest generation of OLED tech which is designed to go head to head against LGs’

EDIT: The new screen tech may also be behind the rumors of touchscreen macs as well

Reading that made me wonder if the whole “touch screen Mac” drama is about making iPad apps run better on the Mac - most folks I’ve talked to said iPad apps are generally a fail on the Mac without touch…at least that way they save face over the whole “gorilla arms” and “refrigerator/toaster” nastiness.

There is some truth to that especially games. My daughter loves Stardew valley but it’s clunky to play on mac. The app itself runs fine, but mouse controls doesn’t quite translate to touch.

For a long while, I’ve been thinking that when touch (and to a lesser degree stylus) capabilities become ubiquitous, Apple would be in an awkward position.

Yes, there’s the iPad and Sidecar and so forth, but it still leaves a lot of gaps/open market space, which Microsoft and co. are doing quite well filling w/ the Surface and so forth.

A touchscreen convertible Mac w/ support for the Apple Pencil would be a natural extension of everything else in their lineup, and one I would have to buy, and which would make me re-think my portable (Samsung Galaxy Book 12) and phone (Galaxy Note 10+) — that would just leave my Kindle Scribe and Wacom One (when it arrives) as odd unit out.

Remember back when the Compaq TC-1000 came out and folks described it as something which looked as if it had been made by Apple? I’d really like to see what Apple would do in this design space — I’m still waiting on the promised replacement for my Newton MessagePad (I’d dearly love for my Kindle Scribe to have the same capabilities as my Newton).

Touch only or also support for wacom or surface stylus?

If Apple does announce a pen/touch screen Mac book…,

The apologist Apple user base will collectively and conveniently forget their previous rationalizations and Apple will bank a HEE-UGE sales boom as everybody upgrades their Macs.

It’ll be epic, especially with the right marketing. It ought to be exciting to watch. (Despite my feelings about Apple, I’ve often enjoyed their marketing. I’d love to see another series of those “I’m an Apple. I’m a PC” ads).

Today many people have learned a comfort zone in running (and paying for) multiple devices. I don’t think a suddenly touch-friendly line of Macs will limit their iPad revenue model as much as it once might have.

We’ll have to wait and see…

One aspect I’d really like to see examined is holding a laptop at 90 degrees as if it is a book — stylus in the dominant hand, writing/drawing on the screen, the other hand holding/stabilizing and pressing modifier keys.

I’m really puzzled by this talk of a touchscreen Mac. The official line from Apple has always been that if you want a touch screen computing device we have the best experience for that, in multiple sizes and configurations and that’s an iPad.

So at least in Apples terms, a touchscreen/pen enabled Mac would have to offer something “new” or do it “better” than it’s currently being done.

I just don’t see it, but who knows…

And of course Apple dismissed the pen, until they had the pencil.

And just to be clear, I’d buy a touchscreen Mac, but then it would call in to question why I need an iPad.

What will be will be. The marketing departments push out reasons to diss the competition’s feature when they’re lacking it and reasons to gloat over the competition when they (still) have someting the other does not. (Remember Samsung’s commercials about the headphone jack?) They all go silent when they do a 180.

I just ignore that stuff and try to evaluate things as they come, when they come. I mean, getting worked up when marketing displays hypocrisy is like being upset when you discover a politician was lying.

I was just playing a game on my iPad, as a Sidecar mirrored screen from my Mac mini, which was running it via Crossover since it’s a Windows-only game. It works quite well EXCEPT that Apple doesn’t allow Sidecar touch control (except pinch zoom in an app’s drawing area)—I have to use the Pencil. Which is fine now especially with Pencil Hover. Anyway, I suspect Apple isn’t adding touch passthrough because it would prompt users to ask why not extend it to touchscreen Macs themselves. So I’ll be quite happy if the rumors are true. I might not ever get a touchscreen Mac but if they exist then Apple won’t have a reason not to let Sidecar pass it through.

Note: a little company called Astropad already has a method of doing that (Luna Display + Astropad app) and to me it seemed not at all less functional and responsive as Windows touch. Menus worked splendidly, I could drag and drop with my finger, etc. Everything. So I call BS on it being such a massively difficult endeavor that the richest company in the world with many of the most talented tech engineers in the business can’t hack it. I’m fairly sure they already have touch-enabled MacOS in their secret labs for evaluation & refinement.

(I’m not using Astropad+Luna even though I paid for it because Sidecar has far better wireless speed and quality. Which is likely why Astropad discontinued them in favor of a $100/yr premium method.)

yeah I don’t see the need to be philosophical, just genuinely curious/puzzled what a touchscreen mac brings to the table.

EDIT: and if Windows has been any guide, be careful what you wish for…

So at least in Apples terms, a touchscreen/pen enabled Mac would have to offer something “new” or do it “better” than it’s currently being done.

Isn’t it written in stone that whenever Apple brings to market a new/improved design on an existing concept that it is by divine right of birth “the first ever” or at the very least “is inherently superior and the way it should have been from the beginning”?

I don’t see why they can’t just put the tab S8 Ultra screen inside a laptop and call it a day.

At least here, they have the precedent of having brought the Newton to market, which I’d argue was one of the first generation of pen computers.

Like I said, I’m still waiting for a replacement for my Newton — my Samsung Galaxy Note 10+ handles some aspects of what it did, my Kindle Scribe some others, and I fall back on my Galaxy Book 12 for the balance.

In context, the infamous Jobs thing about failing if it needs a stylus was because at the time the stylus was mandatory for operating the typical portable device interface. It was its primary purpose and the iPhone changed that to touch operation without a need for a stylus.

… And ironically their Sidecar implementation requires stylus operation instead of touch (if you go without keyboard).

At least here, they have the precedent of having brought the Newton to market

I think that’s true, to a point and conventional wisdom is that the “DNA” so to speak of the Newton ended up in the iPhone and the iPad.

I think that’s accurate in one aspect which is that the MessagePad was Apple’s entry point with ARM chip technology.

But both knowing the Apple people we deal with and even going so far as to pull out my still functional MessagePad 2100 from the closet yesterday, I find very little that has come from that device other than the most basic/universal UI stuff that is true of any pen based device on the market today.

You could make a good argument for the Palm Pilot being at least as important and Apple did hire multiple engineers after Palm destructed, that ended up as part of the iPhone/iPad team.

And I think that doesn’t dilute the point that perhaps I’ve been muddled in trying to make, is what could Apple have up their sleeve that “moves the technology forward”

I also sort of agree with the “gorilla arm” idea that especially with a desktop or conventional clamshell laptop the entire OS and App experience is optimized for keyboard/mouse.

Even with something like my Surface Pro, the only time I use it with touch or pen is with Apps that have at least minimal features geared towards that use case.

And as I type this on a Mac this morning, it’s obvious to me that Mac OS and the app ecosystem are 100% geared towards keyboard/mouse input and will have virtually all the same frustrations and compromises that Windows has, and arguably it could even worse with Macs as at least Windows has "snap to. "

I’m obviously asking a somewhat rhetorical question and was merely wondering what others might think Apple could/would do.

In other words, speaking strictly for myself, I can’t see any value add of a touchscreen Mac if the only things it brings is touch/pen support to the existing OS/App UI. Otherwise, I already have what is arguably the best touch/pen experience already with my iPad.

PS: I guess I’ve been overdue for a tome of late

PPS: If Apple really is going forward with touch, I’d be willing to bet a paycheck that they will do so by doubling down on Stage Manager, for better or worse.

I rather miss Calligrapher on Mac OS, which was pretty much the only part of the Newton code which survived that implosion.

As I noted, touch only makes sense for a tablet, or some sort of hybrid, and the normal use case doesn’t make it very comfortable.

On the units which allow it, I’ve found it quite nice to be able to rotate the screen of a traditional laptop to portrait mode, then to hold the unit rotated 90 degrees as if it is a book, but I seem to be the only person who ever does this.

I agree that touch isn’t really a huge payoff (except for making interaction w/ iOS apps more natural), but I could see a mode where:

I’ll be able to mock this up once my Wacom One arrives tomorrow, so we’ll have to see.

All of this does make me want that dual-screen unit which was mentioned here even more.

I think we agree, and for that matter, the more I think about it, if touch does appear, it may come first in a successor to the iMac, something akin to the Microsoft Studio 3

All of this does make me want that dual-screen unit which was mentioned here even more.

I’d discounted that until just now. but a dual screen (screens only) MacBook would make a certain sense there as they’d obviously need that for virtual keyboard and trackpad on the second display for example

I would love to see what Apple would do w/ a touch screen on a system like to the “sunflower” G4 iMac: 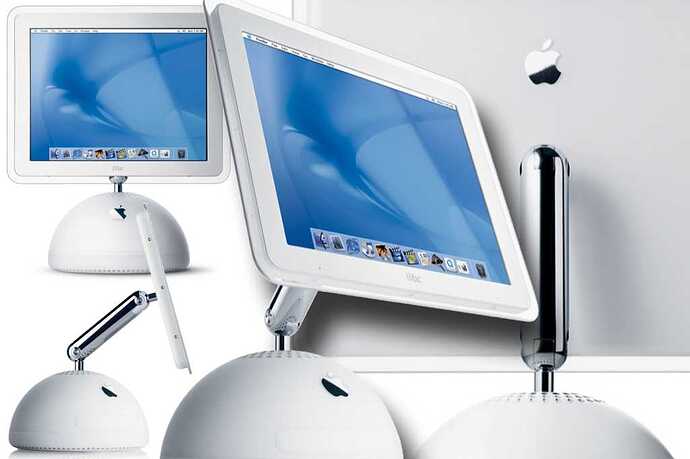 Two decades ago, Apple introduced the iMac G4, and the company again turned the market on its head. And in doing so, it created the greatest Mac it has ever made.