Really looking forward to getting that Duo Uno up and going as my folding Android tablet - from Dan Seifert’s re-review of the Duo Deux:

" It was a $1,500 novelty that could only appeal to the most die-hard Microsoft brand stooges willing to put up with its many faults so they could have the never-launched Courier device they dreamed about over a decade ago…

The Duo 2 has not replaced my primary smartphone because I use them for different tasks: messaging, calls, photos, smart home control, music, and mobile payments on my iPhone; reading, multitasking, note-taking, and YouTube on the Duo 2. I’ve yet to actually take a call on the Duo 2 because, unless you use wireless earbuds, it’s horribly awkward to do so. Mostly, I’ve used the Duo 2 exactly how I might use an iPad Mini, except it folds in half and fits in my pocket."

Here’s to living the dream on my Courier!

The honeymoon is over on mine but it’s still in use. Quite a nice mini tablet for 300-ish dollars.

Eventually I’ll try the Windows 11 ARM experiment on it but that looks to be quite involved and I’ll have to be in the mood with lots of spare time.

I can see me “playing” like that as well in the future - why not, especially since mine was only a $200-ish toy.

Major news on the WIndows 11 on Surface Duo Uno front - full dual booting without having to have your PC connected to the Duo:

It still infuriates me that if these garage mechanics can do all of this, W T F is MS thinking?

PANOS - outsiders are lapping you man!

It still infuriates me that if these garage mechanics can do all of this,

Had the same thought when I read the article.

What really galls me is if a small group like this can pull this off, why the h*## don’t we have a WOA Neo already, much less a SG4?

I mean, they could just go all in and help Samsung make something. They already have a good relationship. And HP would probably be game if the funding and support is there. LG still have some of their mobile division around as well who still make prototypes for display tech.

As for why they haven’t put full Windows on the Duo… leadership clearly do not want to for whatever reason. The flexibility and openness to ideas at Microsoft seems to have decreased a lot lately - see Windows 11. They now have an attitude of ‘we know best’ like Apple, but without the complete ecosystem and slickness to back it up.

They now have an attitude of ‘we know best’ like Apple, but without the complete ecosystem and slickness to back it up.

So true - it’s my way or the Highway but they have no pavement on their road - so maybe I’ll take the highway - at least those authoritarians have a map!

My OG Duo came. I was worried I had a DOA at first as it was all the way dead. It took two different chargers to get it going, but it finally started getting warm, telling me it was actually charging the battery.

I missed the OG form factor. It seems so subtle, but it’s so much more sleek. It’s so slightly thinner, but it’s noticeable. I wondered when the Duo2 came out if I would be frustrated by the bigger bezels on the OG, but I’m not feeling that difference in the same way I’m noticing the thinness, not to mention the flat fold back. I can’t wait to try to get Windows on this thing.

I can’t wait to try to get Windows on this thing.

You might want to look into the magnetic port dongle to prevent damage from the edge cracking around the port - seems there are two types of Duo Two - those that have cracked and those that will. Also, that leather case ads nearly nothing to thickness but nice protection of the glass and edges.

I’m going to try to set up the build environment tonight. I meant to ask about that case since I’m used to the fold that only folds flat and I’m using these more as tablets, not folding them back. Or at least, I’m not folding the duo2 back, the og 360 flat fold back is so much nicer. Do you wish you had tent mode?

I have a bunch of those magnetic charger thingies on my amazon wish list. Guess I should pull the trigger on those.

I’m going to try to set up the build environment tonight.

If it’s not too much effort, would you mind chronicling the process in its a separate thread? E.g. “OG (Original) MS Duo as a Windows 11 on ARM Mini-Tablet”

I think quite a few here would be interested in reading about the experience. I definitely would!

Yes, that’s my plan. Of course I’ll document my (mis)adventures. If I’m feeling fancy, I might even try to take video while I go through the installation steps. But I’m going to get things set up while my kids are in gymnastics tonight and I don’t think other folks would appreciate a livestream running from the lobby.

Yes, that’s my plan. Of course I’ll document my (mis)adventures.

Awesome! I’m sure there’ll be plenty to write even if you just give us your impressions of the process, so I recommend keeping it simple at first.

Of course if you prefer to make a fully narrated step by step YouTube installation guide, I won’t stop you!

I have a bunch of those magnetic charger thingies on my amazon wish list. Guess I should pull the trigger on those.

Be sure you get one that passes data as well - some are charging only.

Here we go! I’ll be following the steps outlined here: SurfaceDuo-Guides/InstallWindows-SurfaceDuo1.md at main · WOA-Project/SurfaceDuo-Guides · GitHub Tonight, my main goal is just to get through the Files/Tools Needed section to have everything ready to go. I have read through the entire guide to make sure I have an idea of what I’m getting myself into. For background: I have imaged Android tablets back in the day with community built ROMs and I have manually partitioned hard drives for vario…

I’ll be reading along with interest, but not likely to repeat the exercise myself. Still enjoying the SD1 as a little Android tablet, and installing WOA on it would break some thing that I enjoy. Like using a good Kindle app, watching video on the various streaming apps, using airline apps for when flying, etc. I guess I’m saying I don’t want to lose the apps. But… very cool experiment!

And why exactly does he keep looking for greener grass? 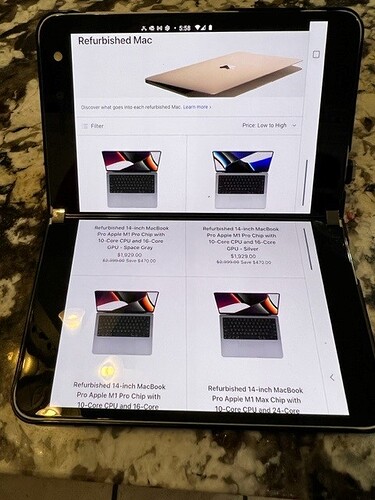 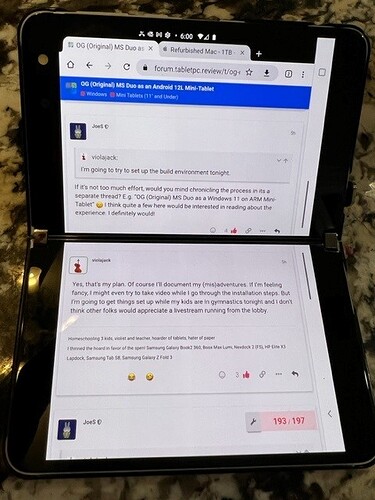 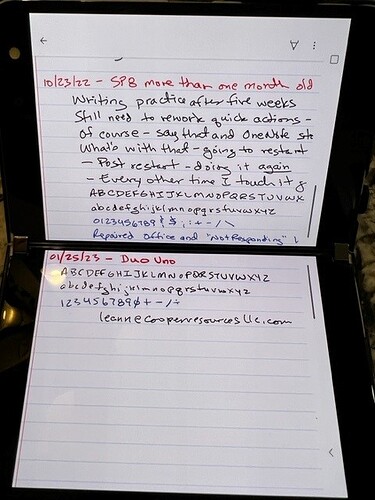