Images of the new Nothing Phone

Of course I don’t think the look will make or break this phone, but the software and price will.

This is what the Nothing Phone 1 will look like | Engadget

Watch to the end… Brownlee makes a painful observation Some really nice ideas there - can see those getting stolen by bigger manufacturers.

Honestly, it seems like a whole lot of nothing.

Sorry, I had to. Those are some pretty neat lights, but they’re just that. And only one colour. And on the back. I think a single multi-colour LED is far more useful, especially if it’s in the front. You can probably make just as many useful combinations (that’s you’d actually remember).

I think the biggest thing that will likely doom this is that it’s not coming to the US. Yes I know that the US is only a small fraction of the total user base of smartphone, but for better or worse, as multiple smartphone vendors have learned the hard way, the US has by far the biggest mindshare which of course significantly affects the resources applied across the board.

OTOH we’ve heard rumors that T-mobile is talking to Nothing, possibly as a US exclusive.

And I think/hope that one of our EU or Asian customers will ask us to certify one, so that will give me a chance to play with one.

Honestly, it seems like a whole lot of nothing.

I think a single multi-colour LED is far more useful, especially if it’s in the front. You can probably make just as many useful combinations (that’s you’d actually remember).

You have to consider just how many people with colour blindness would struggle with multiple colours. “White” (I’m not being “physics correct”) is a universal light whereas many people won’t pick up different nuances of different colours and almost as many can’t actually see colour differences.

I do appreciate that and have sympathy for people who are colour blind. But they are still a vast minority and that’s not why multi-colour notification LEDs went away.

There are blind people too, and they can’t make use of many features of a smartphone, yet we don’t cut or not include features due to them using smartphones. And the LEDs went away because of this bizarre quest for minimalism (and cost cutting).

Nothing have almost certainly used only white for aesthetic purposes.

Yeah, possibly the “Apple effect” in play as well. I’ve noticed that since the rise of the iPhone and especially air pods, "white " has become synonymous with “best tech” .

A lot of things that before had red led indicators now have white ones. Televisions are a good example.

I’ve noticed that since the rise of the iPhone and especially air pods, "white " has become synonymous with “best tech” .

Ironically, how many years has it been since there was a white iPhone? I can’t remember the last one.

They still have them, they just call them the more “magical” , Starlight… 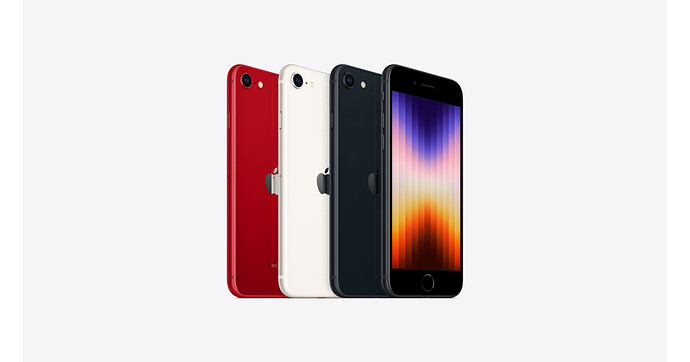 Get credit toward iPhone SE when you trade in a smartphone. Make low monthly payments at 0% APR. Shop online with free shipping.

Nothing have almost certainly used only white for aesthetic purposes.

I can’t argue that as I don’t know their reasoning but in terms of white light for visual light communication - there’s at least 15 years of research at various universities in developing white light as a communications tool. I’m not confusing it with the “li-fi” experiments which look very promising as a data transmission tool. Although the amount of aesthetic appeal in this device equals nothing to me, I do agree with Dave’s points about midrange smartphones being good enough for most uses.

Unfortunately my smartphone camera is my only camera so the quality and features are important. Newer, higher end phones also tend to get better reception—it’s night and day between my backup iPhone SE (2016) and my 13 Pro, often the difference between having decent service and no service at all. 5G has not entered my life yet, but it might in the next year or two. Maybe. Etc.

Sometimes midrange isn’t good enough. And thus I reluctantly pay for more. I’d go back to my iPhone SE (2016) in a second if it was good enough for my current needs. Love that phone.

It’ll probably do well in Europe and Eastern Asia (Korea / Japan etc) where 4G coverage is pretty good. We’re pretty well covered for 4G here in the UK even if 5G is making more and more of an appearance.

Very good point about the camera - I’m moving over from SLR to mirrorless cameras however so smartphone cameras don’t do much for me.

Yeah, 5G hasn’t really made much of an appearance here in Japan. And we have two networks with almost 100% 4G coverage, and another with perhaps 70% (of course with the urban areas covered).

It’ll probably do well in Europe and Eastern Asia (Korea / Japan etc) where 4G coverage is pretty good. We’re pretty well covered for 4G here in the UK even if 5G is making more and more of an appearance.

Watching Marques Brownlees new video - the Nothing phone isn’t planned for the USA anyway unless someone imports / exports it. I enjoyed seeing the price in UK £ for a change.

One thing I hadn’t considered too much beforehand was how much the phone is designed to be (glass) face down to you have to be extra careful about what type of surface you put it on. It’s apparently quite chunky too… That LED display will split opinions still - if your phone lives in your back pocket then it’s pointless. For me, having gotten used to seeing students with brand new but broken screens from having their phones in their back pockets - I never do that anyway - my phone lives on my desk or in my backpack when I’m out and about.

For those who like the aesthetic but not the specs/functionality: 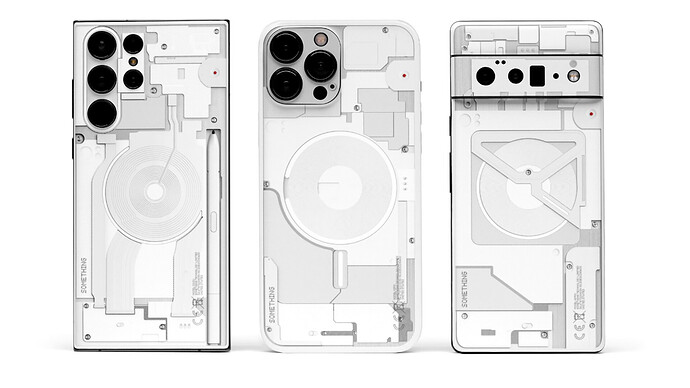 Who needs a Nothing Phone 1 when you can turn your existing phone into one?

DBrand love to troll. That’s all you need to know.