I’m intrigued by this. I had the first couple versions of the Apple Watch but both didn’t find it quite useful enough, and also really did not care for the rectangular case. Now that I’m toting a S22 Ultra for work, I’m considering again. I’ve looked at the Samsing Galaxy watch, but several things just feel off.

BTW: I’m almost 100% certain that this was deliberate and not a mistake, likely to be a low risk way to build buzz and also get some initial takes before they officially release it.

both didn’t find it quite useful enough, and also really did not care for the rectangular case.

Interesting diff’rent strokes. I first got a Apple Watch out of curiosity having not regularly worn a wristwatch for a decade. I was soon sold on the concept. Went Galaxy Watch last year and missed the square aspect and other Apple refinements so much that when Samsung (after 3 months of dithering) returned my Nike SE trade-in (I guess they didn’t like the SE model), I switched back to iPhone, iPad, and the Apple Watch. No regrets, very happy. The watch really makes it all come together for me.

The Pixel looks good but no round face for me, thanks. Info displays so much better, controls are so much easier to use, on a rectangular face. Clearly it’s a YMMV situation.

I won’t be touching it with a barge pole.

There’s too much of a risk that Google get bored of it and leave it orphaned.

@Dellaster Our UI designer for our custom devices and I have gone back and forth on this too. For me it’s a “classic watch aesthetic” thing.

OTOH I agree that Apple has done an absolutely first rate job in optimizing the software for the hardware, and vice versa, whereas Google’s efforts so far have been half-baked at best

For me it’s a “classic watch aesthetic” thing.

I can understand that. Especially if you’re emulating a mechanical watch with moving hands. For decades before I stopped wearing a watch I only used rectangular digital ones so the transition feels natural, using one of the digital read-out faces.

(Hatching on the numerals is from the window screen reflection.) 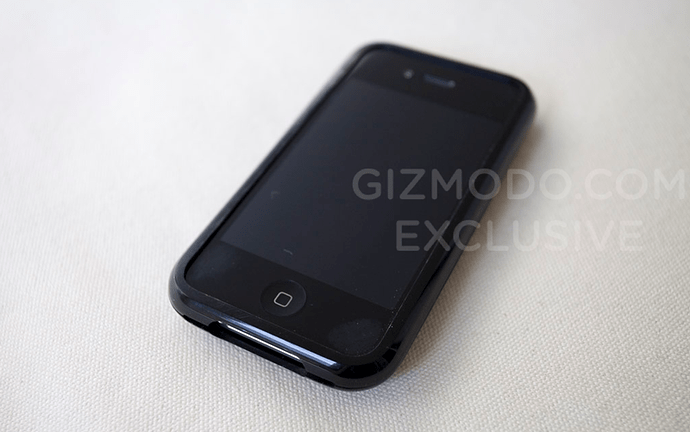 Sounds really familiar, but taking your watch off and leaving it behind seems even more over the top than leaving your phone on the table…

Oops - now I get it - it was a pocket watch (you know, it was meant to be carried in your jeans in that thing the kids now call your change pocket…)

Funny, I have gone decidedly low tech when it comes to watches. I have a field watch, which has a manual wind, mechanical watch movement. Keeps good time and tells me the date. No batteries to change and is waterproof to 30M, so if I reach into a stream or the kitchen sink, I don’t have to worry about the watch. 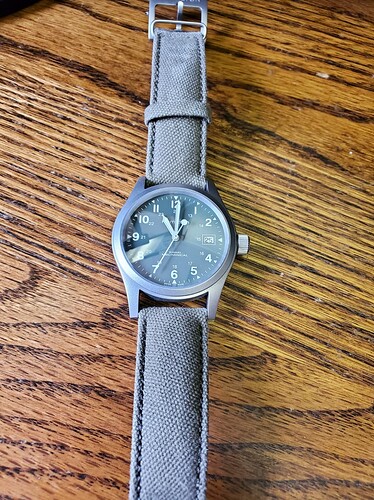 Funny, I have gone decidedly low tech when it comes to watches. I have a field watch, which has a manual wind, mechanical watch movement.

Now that I think about it, I’m similar with watches and tablets, juggling different ones depending on the occasion. I have three watches, although tbh it’s 95% the Apple Watch (5, Nike edition), an old Garmin Vivoactive 3 for when I need long battery life and/or I don’t want to risk losing my pricey Apple Watch, and a mechanical self winding Seiko that I thought would impress the girls. Turns out my gf is not at all impressed, so that one is mostly gathering dust.

Very nice. I have an ancient Hamilton that was my Grandfather’s that he got when he was in the Navy. It looks like it’s been through a war, which is probably true considering when he served. I also have a Tag Heur (also well worn/abused) that my dad got when he was stationed in Germany with the Marines.

Both are fully mechanical and both keep decent time. The just have a charm to them and that modern electronic watches miss.

That being said, I also inherited my father’s tendency to high blood pressure and both my doctor and wife have been after me to get something that tracks heart rate.

I think we should get a first look at the Pixel Watch when/if it’s released thanks to our corporate relationship with Google and I’ll post back here if I do.

I have an ancient Hamilton that was my Grandfather’s that he got when he was in the Navy. It looks like it’s been through a war, which is probably true considering when he served.

That’s one of the reasons I went with a Hamilton. That, and the fact that they were originally made an hour from where I grew up.

My father wore a Hamilton GI issue in WW2 (he joined up in time to make it to Germany just as Germany surrendered). The watches were made in Pennsylvania until the Swiss Swatch group purchased them in 1974 and moved the manufacturing to Switzerland.

This is long and mostly rambling but I’m honestly not sure what Google could do with the Pixel Watch that would get me to come back to WearOS. I’ve used WearOS for a long time now, starting with the LG Sport, then a bunch of Fossils, and then the Galaxy Watch 4 Classic.

…And I just recently jumped ship over to Garmin Epix 2nd Gen with its OLED display, and I don’t see myself going back.

Don’t get me wrong, Wear OS 3 is an improvement (except for the ways Samsung did its classic Samsung thing and changed things for no reason), but I’ve been more interested in activity tracking lately. Where Google/Samsung is far, far behind. You’d hope that the Fitbit acquisition would help there, but we’ll see on that front.

I also realized that I just don’t really use my watches as much of a smartwatch. I’ve got a ton of apps installed on my GW4C, but what do I use? Notifications, calendar, activity tracking, payments. As an example of functionality that I never have used, there’s literally no reason to ever use my watch for streaming music when it needs to be tethered to my phone for a connection anyway. Even with the LG Sport which had its own SIM card, 99% of the time I would bring my phone with me anyway.

So anyway, the Garmin is a step back by pure smartwatch functionality compared to WearOS. It’s got a super simple OS, it doesn’t let me respond directly to text messages from the watch (I’ll admit, I do miss that one a little), it doesn’t have a centralized store (buying watchfaces by sending a payment on Paypal and getting a code is a pain in the ■■■), and honestly its watchfaces aren’t as good as WearOS (Marine Commander is still my favorite and nothing on Garmin comes even close).

But the Garmin again is just so far ahead on battery and sport tracking. With SpO2 on continuously, I get 4 days without charging. A full week if I turn that off. What that means in practice is that if I only charge my watch when I’m showering, it’ll never come close to running out. The Garmin doesn’t have weird periods where it has trouble locking onto my heartrate mid activity like Samsung does. It allows me to connect to my ANT+ sensors on my bike. It creates suggested training programs for running and biking, based on its calculation of my FTP and other factors such as how well I slept. And literally any sport you can think of is tracked. If I decided I wanted to go play Pickleball whatever that is, I could use the Garmin for that.

But then finally, Garmin has fully offline maps on the Epix (and Fenix). So if I’m on a bike ride for a full day and all other devices’ batteries are dead, the Garmin watch can get me home without me having to rely on my absolutely awful sense of direction.

As a smartwatch: Apple Watch>>WearOS>>Garmin Venu 2>Garmin Epix 2 (having used all of those except for the Apple Watch).

But for battery and activity tracking (and I don’t know where Apple fits in on this scale but I suspect worse than Garmin and far better than WearOS): Garmin Epix 2>Garmin Venu 2>>>>>>>>>>>WearOS.

I’ll be paying attention to what Google announces, but I don’t expect anything game-changing at this point. That’s what WearOS 3 was supposed to do, and still I’m fairly indifferent to it.

That’s very cool. My grandfathers was GI issue as well. And that explains something I was surprised about when it happened. I inherited it after he had passed and it had apparently sat in a drawer for years, not being used. On a hope I sent it in to Hamilton to see if there was anything that could be done.

They actually replaced a small part that had frozen up from the lubricant hardening up after disuse. But when I got it back the repair was no charge with a “Thank you for your Grandfathers’ service !” on the bottom of the bill. Like I said it looks very well worn, but still keeps decent time, and of course since it was his, it means a lot to me personally.

Thanks for that. My brother has been trying to convince me on a Garmin too, specifically a Fenix, and from a technical perspective, which I’m sure I’d appreciate, it’s got great functionality. But it looks ginormous (his is a 5x). But he assures me that it wears much more comfortably than you’d think.

I’m going to wait a few more weeks and see if the pixel watch is real before I decide, but otherwise I’m inclined to go with a Garmin. Plus a college friend of mine is a GPS engineer with them.

Well, as as that’s done, I guess I’ll chime in on my watch useage.

I currently use a Seiko 5 automatic. It keeps time and I just don’t have to worry about it. I have an expensive mechanical watch for fancy occasions (and you have to match it to the rest of your outfit, @JoeS!)

I used to use a Gear S 2 Classic for a few years. It was fun, but charging it was a pain. I gave up on travelling with it. The lack of apps weren’t really a problem as I also have a WearOS watch and… only Google Maps integration was better.

Japan is still a mess wireless payments wise unless you use Apple (other OEMs often cheaping out and not using a more comprehensive NFC chip), so I don’t bother with paying by NFC as I can’t get my precious points using it.

I also have a Polar that I’m increasingly wearing all day. Purely focused on fitness and it shows. There’s the Pacer/Pacer Pro now too, that fixes a few issues, so I might pick that up. I just wish they’d make another band, so I could have my analogue watch on one wrist and the band on the other without looking like a clown.

At least it has stuck to wristwatches. They’re kinda on topic since many folks wonder if the Pixel Watch can replace their [insert watch here] at last.

Firmly in the Apple Watch fold (despite the square shape) - just works too well with the rest of my gear. For me it also does a good job tracking my walks and other fitness routines. If I were still in Windows mode I’d reconsider the Galaxy Watch 5 this fall, since Samsung FINALLY enabled Google Assistant.

If only someone could crack the impossible and give us accurate blood pressure and blood glucose (non-invasive) measurements.

Its what we do best.