I think this has some interesting ideas and I agree that the modern smartphone is too large in some cases, I learned that the hard way for me anyway when I attempted to use the Galaxy Fold 3 as my primary phone.

It does remind me a bit of my favorite small smartphone running a doomed OS.
made right before and still sold briefly after HP acquired Palm (and destroyed it) after HP acquired Palm (and destroyed it)

Why does the name Leo Apotheker suddenly echo in my head, and why am I feeling mildy angry?

This is a better page on it when it was called the Pre, and was what I had
Palm Pre - Wikipedia

Right up there with another absolutely clueless CEO who presided over Apple’s near death experience, Gil Amelio…
A look at Apple’s CEOs: From 1977 to 2011 - TNW Apple (thenextweb.com)

I miss when phone screens were smaller.

Using the 808 PureView was great. The display was just rhe right size to use one-handed, though a hair too big to also not have to shift your hand a little to hit the front buttons.

Now, I do use a Fold now, but I actually like using the small front display. If only it where a couple of mms wider and not quite as tall.

Now, I do use a Fold now, but I actually like using the small front display. If only it where a couple of mms wider and not quite as tall.

We might not have to wait too long for its release.

@Tams - good points, but I think it really won’t be too wide nor too tall - the missing pen is a pain point but until Samsung properly fits one in a silo on the Fold its a non-issue to me - keeping track of the pen, or using a triple thick phone because the pen is in a papoose carrier, is a downer.

That’s literally a whole thumb-wider, which is an issue when we’re talking about a few millimetres being the difference between comfort and a stretch.

I miss when phone screens were smaller.

I had to pull my OG SE out of the cupboard. Darn thing still had a 99% charge after sitting for 10 or 11 months turned off (the browser was on the old forum, that’s how long ago). Alas, six updates since 2016 was its limit. No iOS 16 update this year. Not that it needs it to continue working. 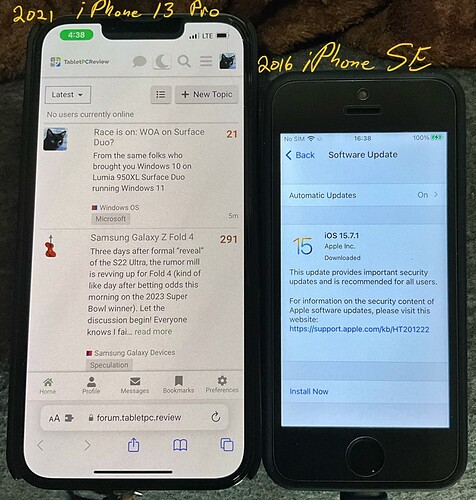 True Tone sure makes a difference in the blueness of the screen, and some websites hate small screens, but oh does it feel great in my hand & pocket! I might swap the SIM over from my Duo Uno for a while.

Probably a matter of the gauge being “stuck” there and not being accurate. It’s been dropping like a rock whenever I use it and slow to recharge.

That’s what I figured, but I didn’t want to spoil the party.

I don’t know, I can still hold my Fold 3 quite comfortably in my palm, even with a pen siloed case on the front screen, that a few extra mm wouldn’t hurt. Still, TBH I’ve gotten used to the size of both internal and external screens. The only incentive to upgrade will be if Fold 5 offers a built-in silo and a bigger screen. I’ve also found myself using these pen less and less, but not ready yet to leave home without it

Maybe you have big hands.

My issue is not holding it, but using the screen one-handed. That’s less/not really an issue with normal candybar slabs, but on a foldable, at least for me, it’s important that the other display is usuable with one hand (and ideally without just shrinking the UI to use part of the display - that never really jived with me).

If I have two hands free, I almost always use the device unfolded - it is afterall what I bought it for.