I honestly don’t know of anyone that still uses it either personally or professionally. That’s not a knock on it in any way, but it does remind me that back in the DOS days, it was the 1000 Lb guerilla in the market and was absolutely THE word processor if you were in the legal, technical or medical fields.

And it had one feature that I think is still not exceeded or possibly even equaled, which is by far the fastest and most comprehensive search and replace functionality. And in fact I knew of several web developers that used WP long after it had faded generally, specifically for that functionality

WordPerfect is not only still around, a new version came out in 2021 - The Verge

I honestly don’t know of anyone that still uses it either personally or professionally.

Oh yes you do!

I was quite fond of the port of the Unix version to NeXTstep — paired w/ Display PostScript it made for a really nice writing/formatting environment.

That said, these days I use LyX or LaTeX.

I stand corrected, which is no big deal as when it comes to tech, it happens frequently

BTW: I was always in awe of how fast/efficient our group admin was with WP. She knew every keyboard shortcut ,macro etc. and could make changes real time as the department manager dictated them to her.

Let’s revive Wordstar while we’re at it!

Wordstar could never hold a candle to WordPerfect. WordPerfect is a vestigal program that can do things no other wordprocessor is capable of. The “View Codes” window is worth its weight in gold. My use of WordPerfect is more limited every day. Word has become the lingua franka of collaborative word processing because of its ability to accurately track changes to a document over time. As I have become embroiled in more and more transactions over time, I have had to learn to use it. But, for serious litigation documents like Appellate Briefs, there is noting that can hold a candle to WordPerfect. It, and its unavailablility on Android or IOS (I don’t even think they have a Mac version anymore) will likely keep me in the Windows camp until I retire. Or die.

Wordstar could never hold a candle to WordPerfect.

Just pulling your chain old buddy. Few today would even know why it was called “Wordstar” to begin with (the Wordstar diamond), or the fact that you had to embed html-like codes to format text. Ugh…

Ahhh, WordPerfect “reveal codes” - you are so right about the precision. That was a tough one to implement in Windows when we were beta testing the first Windows version - my secretary would scream at me - “Don’t you dare touch my computer unless reveal codes is working in that crappy Windows version!”

Always surprised me they didn’t make an Android version, they missed an opportunity to utilize brand awareness.

I’m another WordPerfect user. My daughter is tetraplegic (quadriplegic is the term used in the U.S.) and WordPerfect (and PerfectScript) is the heart of her voice-output communications system and general computer control system. Thanks to a ca. 10,000 line set of PerfectScript macros she can do almost anything one can do with a computer using just 2 head-operated switches. PerfectScript is not just a word processing scripting engine, but a general-purpose higher level programming language with a Pascal-like syntax that allows one to do most (but not quite all) things that any other higher-level language allows.

But even some “core” parts of WordPerfect (that don’t exist or are impossible to use in Word) are critical for her. Her 300+ page vocabulary document is arranged as tables, flexible to lay out and modify thanks to reveal codes, with varied numbers of rows, and number of columns in each row, and sizes of cells etc. There is no usable equivalent in Word where any edit is likely to change, in a completely hidden way, everything downstream in the document. Her vocabulary document even has commands embedded and hidden in it that control the macro (and can be seen as needed thanks to reveal codes), so she can, for example, switch among Italian, English, French and German, adjust volume, screen brigthness etc, on her own whenever and wherever she wishes.

The only thing missing for our use case is a Linux version (with PerfectScript) so I could completely get rid of all the things Windows does that we don’t want it to do.

What a pointless, and largely clueless, article. At least the author in a roudabout way admits so. Well, I guess it was only written for some gawking and entertainment.

PCMag did a good review of the latest version. 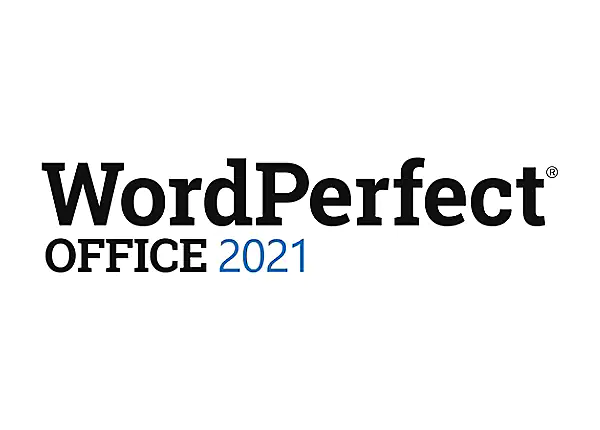 WordPerfect has the only Windows-compatible word processor that doesn't work like Microsoft Office; it allows for precise, predictable control over formatting. It's a worthy upgrade, but new users may be turned off by its dated UI and lack of...

Corel’s website isn’t great with all the stock imagery.

At least it isn’t Nota Bene.

An example of her using that would go totally viral on YouTube. Probably get free life time upgrades from Corel (they own it now, right?).

More importantly, it would probably help other folks in a similar situation — it’s a real failing of society that more effort isn’t put in to help folks who are in such situations — @LROBBINS that your daughter has been able to achieve such independence is a marvel and speaks highly of your efforts as a parent.

Of course, the thing which would be best to see would be a Linux version of WordPerfect w/ PerfectScript.

Have you looked into using emacs or one of the other programmable text editors instead?

WordPerfect (and PerfectScript) is the heart of her voice-output communications system and general computer control system.

Your post was downright inspirational. Glad to see that WP aids your daughter’s communications. It is sad to see such a well designed platform devolve into obsecurity. Word is a very flawed substitute. Unfortunately, Corel will not devote the resources to bring WP to Android or reintroduce it on the Mac and IOS. Linux too. Too bad.

So out of curiosity as much as anything, I was able to hold of a current version for Corel. One worrisome aspect is that it’s still 32-bit. Unlike MacOS Microsoft hasn’t cut off 32 bit applications yet, but we feel like it’s only matter of when, not if, especially as the “thunking” down to 32 bit has already been shown to have multiple vulnerabilities.

OTOH, it’s still possible to run the DOS version in hypervisor though the amount of effort that is likely far beyond most.

PS: our lead windows developer has heard speculation that Windows 12 may be the point where MS ends 32 bit support…

Corel will not devote the resources to bring WP to Android

Seems shortsighted to me. The market for a decent wordprocessor on that platform is wide open, especially among all those who refuse subscriptions.

The problem I’d speculate is getting users to actually pay for it. From what we hear, that’s a huge issue generally on Android, which is why for instance the vast majority of games are “free” with in app purchases. Those exist on IOS too but relatively much smaller numbers.

Plus, you do have Google Docs which is likely at least adequate for the majority trying to do WP on Android and of course it is “free”

The only thing missing for our use case is a Linux version (with PerfectScript) so I could completely get rid of all the things Windows does that we don’t want it to do.

I don’t know if this would be of any help, but I have a shrink-wrapped copy of WordPerfect 8 for Linux. It’s pretty old (think it is the last Linux version they made though - comes with Netscape Navigator of all things, and says it imports/exports Word 97 files - geez). PM me and I’ll get it shipped to you. 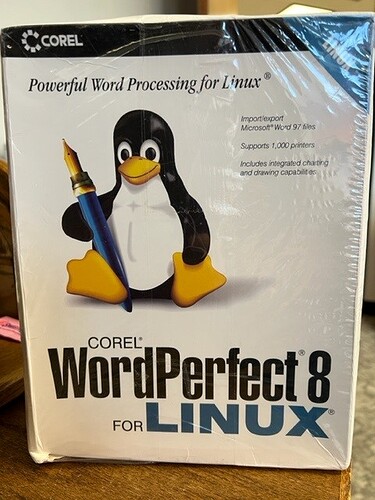 While it is true that Android users are less willing to spend on apps, I personally wouldn’t mind a $50 fee for WP.
Yes, Google Docs are available but it isn’t as advanced as WP, especially if you need macros, or more advanced formatting.

100% agree, but I think with android specifically that the number of users with that as primary device is vanishingly small, and IMHO that’s what’s needed to make it worthwhile . In other words, Android tablets overwhelmingly also have a PC of some type

That is broadly true with IOS as well, but Apple is making significant inroads lately. Samsung is on the right track with the Tab S and Dex, but Apple’s iPad sales in primary markets dwarf the Tabs. the last estimate I heard is that in retail, Apple sells more iPads per day, than Samsung sells of their Tab s line in a month.

I have zero complaints if Corel wants to make an iOS version of WP.
My scenario comes from the situation in Japan during Covid and work from home. Employers install surveilance software on the PC, if you are away from more than 5 minutes (average toilet brake) your boss calls you and wants to know where you went. So imagine a mouse jiggler or contraption that hits the keyboard, then you sneak out with your tablet to Starbucks, but you can’t get behind on work so you can write that report you are working on in WP. Fairly sure there are a milion Japanese willing to fork over $50 for that privilege.