I was just messing around seeing what my new ePaper tablet could do and found those were the only two integrated online services supported for syncing. ‘That’s not too bad’, I thought, ‘I made accounts with them both over a decade ago’.

So I go through the rigmarole of finding the emails I used and passwords (Evernote started the ‘■■■■ Tams off’ race early by requiring I reset my password). All goes well enough, though the storage available on both of their free tiers seem quite stingy. Both have prominent ‘upgrade’ buttons.

Out of curiosity (I don’t need either as OneDrive and OneNote serve me very well) I click on them. What a fucking rip-off! How the ■■■■, are they still in business?!

Both have prominent ‘upgrade’ buttons. Out of curiosity (I don’t need either as OneDrive and OneNote serve me very well) I click on them. What a fucking rip-off! How the ■■■■, are they still in business?!

I like how pish and h3ll are censored, but "fucking’ is just fine.

We should probably fix that. Anyway, don’t keep us in suspense, how much were they asking?

I like how pish and h3ll are censored, but "fucking’ is just fine.

I thought the same thing.

BTW: Now that Musk owns Twitter, all the nasty words are going to be allowed allegedly

I actually don’t mind Dropbox, I use it all the time. OneDrive and OneNote just try and link my Windows PCs together in ways I really don’t want. (the work one and my personal one)

I could rant about TEAMS but I think I’m the only one who sees an octopus with hard to remove tendrils.

Dropbox’s service is fine, but it’s their pricing for upgrades that’s a joke.

I only still use it because as there were a first mover, they’re integrated into a lot of places that others aren’t. Some that aren’t going to ever be updated to support other cloud storage providers. And for that I don’t need more than the 2GB that their free tier offers. I was just curious as to what they did offer for money.

OneDrive can be a pain, but I’ve tamed it and set it so that it only syncs what I want it to sync. Considering how great a of deal it is in Office 365, I can deal with that.

I can’t speak for Teams; never used it. Google whatever-they-call-it and Zoom are okay. I mean, for personal use, I use Facebook Messenger, Whatsapp (not great) or even still use Skype (pretty decent).

I’ll pile on Teams as well purely for technical reasons; it is one of the "heaviest " and also most entangled apps from any vendor in the chokehold it puts on the users systems.

Every time I use it for more than a few minutes, I’m forced to reboot to get the performance of my system back.

I can’t speak for Teams; never used it.

If you’re using some form of 365, TEAMS and all the associated Microsoft bits are nearby. My partner works for a national chain in the healthcare industry and they recently had to upgrade to this “strange new tool” which they would use for email, payroll claims, log worked hours and even have calls and meetings on. She complained about how clunky and painful the new tool was for two weeks before asking me to help her - when I looked at the interface, the colours were different, some of the associated Apps were different but I knew straight away what it was. And right at the top on the right of her homescreen within the App was a tab that allowed her a free 1 month trial of the full Office suite.

I’ll add a new albeit relative minor complaint about Windows including 11 today in handling of multiple displays, especially if you frequently connect to different ones through the course of work such as a 1080p projector today, and the 4k display at my desk.

Both of these are frequently connected to my Pro at different times on a near daily basis. And Windows seems to consistently forget my preferred resolution, bit depth and scaling settings as I switch between them. Contrast that with the M2 MacBook Pro I’ve been testing/using this week, where so far it’s not been a single hiccup.

Not to say that the Apple is perfect in this regard, as for instance MacOS devices don’t like LG’s ultrawide displays much (latest being that even though the display is HDR capable, the mac only ever sees them as SDR compliant).

Not to say that the Apple is perfect in this regard, as for instance MacOS devices don’t like LG’s ultrawide displays much…

Allow me to pile on: when you connect an external display, Win11 does this unsettling thing where the main display view smoothly decreases size (filling say 95% of the monitor) while it figures out the new settings. It’s slow (takes 1-2 seconds) and it comes across to me as if the machine is awol doing it’s own thing, like it’s lost its bearings. I’d much rather see a snappy zoom-out and holding the screen dimmed, so it all looks more purposeful and in control. The current implementation is more like “Wheeeeee! We’re flying!!!” If that makes sense.

Gotta love it when Office 365 Defender breaks perfectly legitimate links with no way to recover. No “use original link instead” or anything, just “we recommend that you close this window”. Gee, thanks! 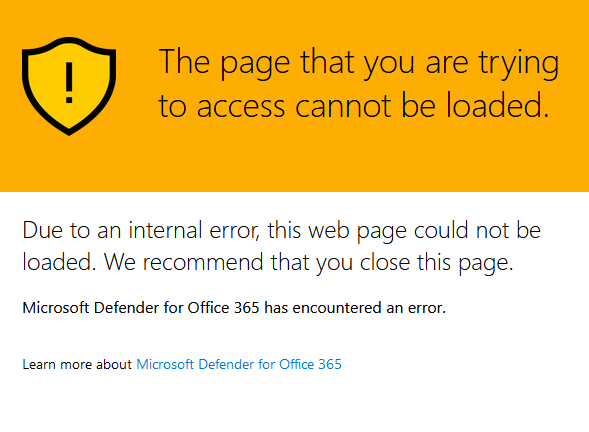 Workaround was not to use the Mail app which (on my system) opens Firefox, but instead go to outlook.com in Edge and click the link from there.

Teams is such a dumpster fire. It manages to drain an iPhone or Surface in no time because, I assume, they are gathering terabytes of my telemetry while it decodes video in software. Definitely not one of Microsoft’s finest displays of their software-first-ness.

Teams is such a dumpster fire.

Our courts have adopted it as our official video conferencing software. I wonder how many donations that cost Microsoft.

I wonder how many donations that cost Microsoft.

In my experience, Microsoft’s guys will have promised that TEAMS can do all sorts of stuff that other software was doing perfectly well which means spending less on buying different software for data management / storage / libraries etc etc