What tech frustrations do you want fixed for Christmas?

I just realized that I’ve been hanging on to a couple of "why don’t they just… " tech issues, so why not list them so I can revisit them when I’m running low on annoyance.

All I want for Christmas is…

How about you guys/gals, anything in particular grinding your gears?

Do we have to keep this in the realm of at least plausible? Assuming the answer is yes:

Reliable local file storage PRIOR to sending to OneDrive. Too often I make an edit, have to shut down and move on, and when I reopen waiting forever for the file in limbo between the SP8 and OneDrive (Major Tom to ground control?).

If the answer is no (as if I were writing to Santa):

A WOA device that is actually portable (sub 10") and affordable. I want a Surface Neo!

Want lightweight laptops with RTX GPU and EMR. All these companies love to say “for creators” but give us half-a** options.

Might need to have a word with Wacom about that. I get the sense that it’s them feeling that their Cintiq devices would be threatened who are the main force behind preventing that.

Though I also think that OEMs don’t really care about ‘creators’. It’s the same sort of bull as ‘back to school’.

I wish for Apple to allow iPhones and iPads to update using cellular data and not require Wi-Fi. It won’t even allow my iPP to update using my iPhone’s hotspot (my Duo Uno’s hotspot is fine; they probably would disallow it if they could determine it was a cellular hotspot).

Android devices like my Duo Uno allow it—the 12L update was on cellular—so I don’t think it’s the cell providers who are preventing it. It’s probably a leftover thing from back when cellphones had miniscule data allowances and people would run out of data for their phone and complain. And since the Apple engineers and execs are in Cupertino where there’s free Wi-Fi on every frikkin’ street corner they don’t even think of it.

I wish for Apple to allow iPhones and iPads to update using cellular data and not require Wi-Fi.

That seems to be possible already. Conveniently I had an update waiting and a bad wifi connection, and I got this prompt: 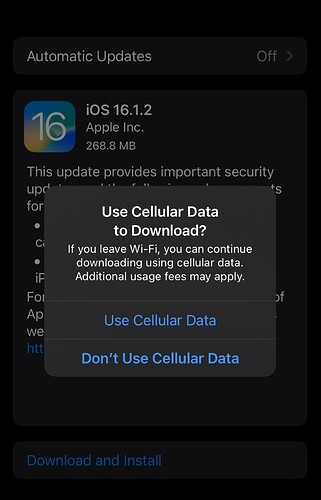 Is that not what you want?

Yes, but I should’ve specified for LTE. Clearly you have 5G which allows it nowadays. The message I get is this: 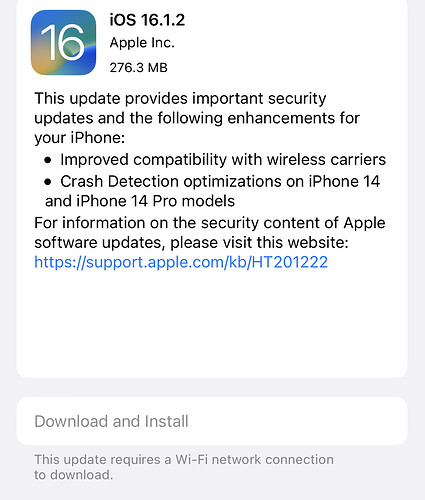 Interesting. I have my phone set up to just not use 5G because for a while TMo’s 5G was unreliable and it seemed to cause substantial battery drain. And under “data” mode I see an option “Allow more data on 5G”, but mine is actually set to “Standard”. So I’m honestly not sure what the difference is with your setup. Maybe it allows it because the download attempt started on Wifi?

Maybe it allows it because the download attempt started on Wifi?

That might be it. I have AT&T and if you do not then it’s also possible that they have an agreement with AT&T to only allow it on 5G as a way to prompt people to upgrade. And Apple would get a kickback for that I guess. I recall that it was the same on Verizon.

Yeah, it’s not because of cellular interruption. I started it fine on the Duo hotspot, killed the wifi, and the iPhone gives this:

Do we have to keep this in the realm of at least plausible?

That was the intent. Issues that seem easy to address but that for some reason haven’t been fixed for years.

On that note, let me add

Let me add: an easier/more convenient method of changing brightness manually on the Surface Duo. Swiping down twice from the top to get to the slider, sometimes thrice because one of the swipes doesn’t register, is way too inconvenient.

I’ll set my sights on a more practical solution to a little fustration.

Looking for a method to sort of lock the Surface Pro 8 Kickstand in place.

I sort of crafted a sweet mobile dual monitor solution using the Mountie+ to afix a Samsung Tab S6 lite on top of a Surface Pro. I’ve did this initially with my Pro 5 and the Tab S6 lite, but I want to upscale to the Tab S8+ since its 12 inch screen would be more approximate to my current Pro 8.

Problem is the Surface’s kickstand is can’t really support the weight and it takes very little for the kickstand to start sliding and topple the whole mountie and tablet off.

Heavier devices, like the Hp Zbook X2 had enough heft where that wasn’t an issue with that device, but with the Pro 5/8…the best solution would be to find a way to lock the kickstand in place. Now since this is for a mobile solution, the solution needs to be mobile as well.

I sort of went in an alternate angle by getting a different product. The NexPad which although intended for a regular laptop, I was able to get it working with my Pro 8. Sadly the screen quality is super dim, like 100 nits or so, and even though you can get it stable (with the magnet and secondary kickstand) its overall setup is more cumbersome then my mountie solution. 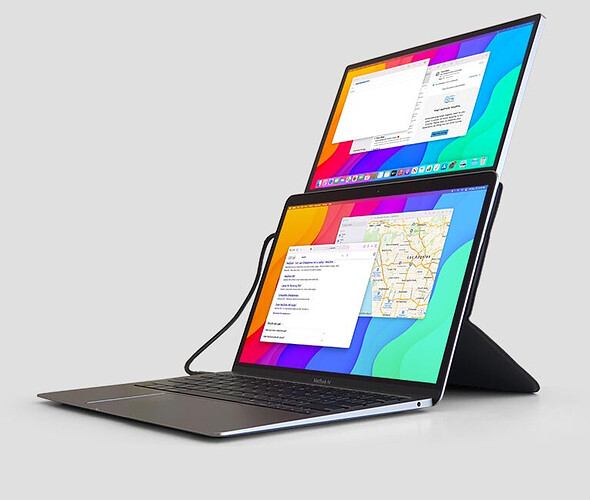 Bet you get a few people staring at you in Starbucks.

Is anyone doing work at Starbucks anymore? Fewer tables/chairs; louder music; even more crowded than usual…and all those old guys (who me) playing dominoes…

Is anyone doing work at Starbucks anymore?

I imagine that the people who got work done at Starbucks prior to the pandemic found alternatives during it and not all of them came back to Starbucks as the pandemic eased. That left room for domino players I guess?

I have a feeling it may be more related to the bandwidth for the update. The failure rate of the packets sent for the slower connection may not be sufficient for the updates to actually go through successfully. I could be way off, but with updates getting larger and larger since current internet speeds have been increasing, along with memory and processor improvements, it may be enough for them to want to limit the possibility of consumer complaints from bad update attempts.

As far as tech frustrations, the biggest on my list is I wish Apple played nicer with OneDrive on the iPad. Especially with CSP, which I know is a lot on the CSP engineers, but a lot of it is because Apple just makes it hard to work with third party options to their own iCloud stuff. But storage on OneDrive is comparably cheaper, since you also get the full Office suite in addition to the storage. That and a better, more controllable and user friendly file system on iPadOS would do wonders for my workflow.

From the hardware side, I’d really like an Apple Pencil felt tipped nib and maybe mini led to come to the 11’ IPP. Also, more of a nice to have than a gripe, there are third party options for a magnetic mount for the iPads that have to go through a whole lot of hoops to set up charging. Apple would do well to make a magnetic swivel mount that takes advantage of the smart connectors on the IPP to mount as a dock that can connect to an external keyboard and mouse and have landscape and portrait multi angle views. I’m sure they’d over charge for it by at least $100, but it would still be a nice option.

I have a feeling it may be more related to the bandwidth for the update.

I would be more willing to buy that explanation if my Surface Duo didn’t download Android 12 L with no issue at all, on cellular, on same provider, on the same tower, on the same account, even though it was about 10 times bigger than this little update which is only 276 MB. And @JoeS has no problem downloading the same update on LTE, but using T-Mobile.

It also has no problem downloading a Pages update at over a gigabyte along with many other apps which are quite a bit larger than 276 MB.

Heck, it’s 15 GB to fully install Genshin Impact. No issue or warnings on the same cellular.

Thinking about it, it’s probably a case of Apple giving a concession in this area in exchange for the cell providers allowing Apple to do updates directly without the provider bloatware, etc. And the agreement got an exception for 5G. And maybe T-Mobile never got that agreement or something. It’s an outdated policy that goes back to 2G and/or early 3G I bet, when bandwidth seriously was a an issue.