On mobile at least, we are now the first hit in Google Search!

When you Google “tablet pc forum”,

Hard to say if it will sustain and why on desktop chrome it’s (as of this morning) third there, but regardless this is great progress for our little band…

I was marveling the other day how far this site has come. Congratulations to the masterminds that pulled this off.

With all the Applefiles these days, I wonder if we are still a TabletPC site?

But we still have @dstrauss fighting the good fight to get Apple to see the light and bring touch/pen to MacOS!

I just checked via a VPN with in-private/incognito browsing to weed out my Google account and IP recommendations. And by golly, we are at the top of the list! 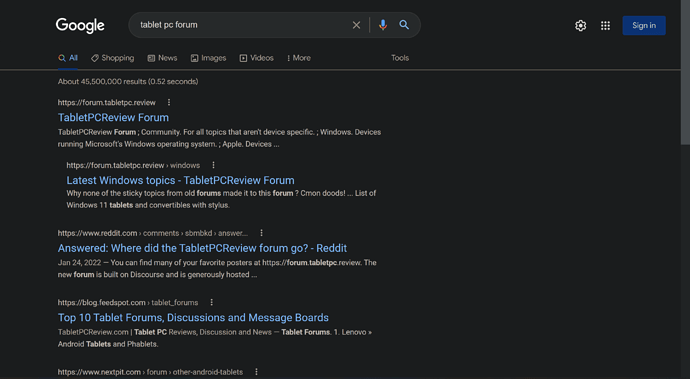 In any event, congratulations to @Hifihedgehog, @JoeS, and all the others who have built this masterpiece.

Agreed. If iPadOS becomes what Windows should have been, I have no qualms. We still have a tablet PC. As for Windows 11 and the hijinks that Microsoft has taken us down with that…

A virtual toast to @Hifihedgehog for making it a reality !!!

And we can’t forget @JoeS’s heroic efforts. I still can’t forget his multiplying rabbits carrying forum closure notices to the four corners of the old forum…

Kudos to @Hifihedgehog for the hard work and foresight that brought things this far when the forum would only be a memory otherwise. Thanks also to @JoeS for continuing a great job as admin as well as those who aren’t as visible, but helping in the background.

I always thought of the PC in “tablet PC” as “personal computer”, which was the original meaning before being co-opted by IBM and then generalized to MS-DOS then Windows devices. So iPads already qualify, being much more of a personal computer than the IBM PC ever was and certainly a “tablet” in every sense, touch and pen included.

The Windows-only tablet PC site was the (long defunct) Surface Forums that I frequented before discovering TPCR.

Well, Apple are largely to blame for the ‘PC’ image now, because they wanted (and still want) to be special. Even though they sell PCs.

They ARE special, because at least they have a strategy and what appears to be a planned path, while MS is “interface of the day.”

I had deep concerns that Tim Cook would dilute the Apple corporate formula into a mere money churning machine and allow their technology to take a back seat only to stagnate and decay. To the contrary, Cook has done a remarkable job staying true to all the innovation trajectories that Steve Jobs had set in motion before him and following by that playbook. Further, it is easier to make the simple better the very first time around than having to go back, get out the virtual eraser after making the simple too complex and then go back to the drawing board. They are playing that long game: they are taking their time and making countless times sure that before they integrate any power user feature, they do it as cleanly and painlessly as possible. That degree of patience is commendable and deserves a lot of praise for the commitment they have given to it since many other tech company CEOs whose career backgrounds deal more with purse strings than cleanrooms often screw up on these things.