This looks interesting potentially, though the specs, specifically the aspect ratio is a bit of a head scratcher, at least to me who as I’ve said is not an artist. I also think it may be pricey ~$450 from what we are initially hearing.

I do like the inclusion of the dial however

What does everyone else think?

For MPP, their Zen portable displays look more appealing, and there’s an EMR ProArt one too.

This is quite interesting though, as I assume they will offer the same virtual controls that the Duos have. And I can see it being of use to someone who doesn’t been to draw/write much. Say, notes on one side, sketching on the other. Someone who doesn’t want or might not have room for a full height display (due to keyboards, papers, etc.)

For those who don’t mind touchscreen controls, it could also be a very versatile alternative to a Stream Deck, which is also bulky. Those same people likely would like to be able to quickly doodle something (say, on stream), or even use part of it to monitor their stream, look at chat, etc. I mean, all the reasons the Duos seem to have done alright.

That said, it is quite bulky. I assume for stability reasons, but it takes away some of the benefits of it being so short.

Think I’ll just stick to Sidecar - even Duet Display makes for a more compact combo than this for your Windows laptop.

Impractical aspect ratio, you still need a laptop bag to carry something that long.

This size doesn’t fit well on a desk either, as the horizontal space is usually taken up by keyboard and mouse. It might make sense to be put right in front of the main monitor on a work desk, but connecting to a laptop in a cafe and it takes up as much space as a standard sized screen. And putting it in portrait mode is impossible.

Also 450$ for just mpp doesn’t seem to worth it compared to the other standard sized 14" mpp screen ( I remember also by Asus?)

To potentially save others a click and the scroll, here it is in all its lengthy glory! 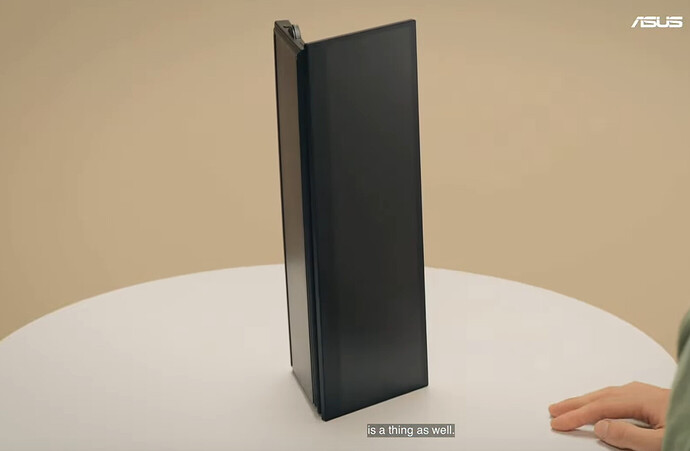 Is a thing as well indeed! And here it is in a more standard orientation:

boy it does look to be more than a tad bulky. Interested to see one. Hopefully someone in the company will see a need for this and get it approved so we can test it out.

boy it does look to be more than a tad bulky.

I updated my posts with some screenshots from the video. That shot that I posted before from the article is pretty misleading, making it look short and chunky. When instead it’s wide and lengthy.

ASUS just showed off its ProArt Display PA147CDV at NAB 2022. The device supports touch, pens, and features a physical dial that can control creative apps.

also not sure how much it will be, but i’m willing to test it out.

Thanks, those shots make me wonder even more about the aspect ratio. I also saw one of the sites that it can go vertical too, and that they might have some type of clip attachment so you could hang it off the side of a display. though the weight would concern me a bit.

It seems that the Zen version is out now. Pretty much as expected. Well, the brightness is even lower than I expected.

If you can separate and drag multiple separate tabs onto this screen it could support a more conventional screen. Photoshop / Clip Studio / Adobe Animate (I still use Flash Professional) would all benefit from allowing the main monitor to be the art workspace screen.

I don’t think I’d buy it full price though.

Hello? Was that to me? I was responding to the OP

In the future to avoid confusion: if you hit “Reply” at the bottom it becomes a reply to the thread. If you hit the smaller “Reply” on an earlier post, it will show who you’re replying to like in this example.

Edit: … and then anyone seeing the reply can click the little curved arrow next to the person being replied to, which will expand the relevant post inline.

…except if you happen to respond to the last post in the thread, in which case Discourse will add the text “1 reply” to the previous post.

TL;DR using the small curved reply arrow will show who the reply is to in one of two ways. Using the big reply button will not.

But I thought it would be clear that it was meant as a reply to DoobiesOobies as that’s how it has worked in pretty much any forum since forever. And there was no one else participating here at the time.

I wasn’t attacking you mate - however, if you could clarify what you wanted me to explain or expand on - or have we sorted things?