List of Software that turn tablet into drawing screen

Since most of the people on this forum probably have one or a few old penabled tablet that is retired for outdated processor/OS, I make this thread to cover and dicuss what software we can use to bring new purpose for our old tablets. This will cover all the OS (as long as the tablet is penabled. Some of the solution here I have only heard of and lack information which might need input from others.

So Microsoft Wifi direct projecting from PC to PC is an interesting thing (and is probably an answer to Sidecar that no one cared about). It can accept pen, touch and keyboard input from the Miracast receiver ( Samsung second screen, penabled Windows tablet). It is the native supported way to turn a Windows tablet into second penabled screen without any third party download.

I wouldn’t have cared about this Windows feature as I have no trust in a wireless solution, but then I came accross an interesting article about Miracast over Infrastructure. According to this, after establishing the Widi connection over wifi, the subsequent data transfer can happen through a wired Ethernet if available. So I did an experiment:

So far, the wired connection is clearly an improvement over wireless, but in my case, it only went from unusable (wifi) to barely usable (wired). The wifi performance was so bad it cant show any movement, wired performance probably on par with Samsung second screen when it work. Here is a video of wired connection:

Windows Miracast project screen over ethernet to another Windows tablet

I think the main culprit in this case was my weak Atom x5-z8300 4GB RAM tablet PC with weak Wifi - even drawing on the tablet itself lag almost as bad as Samsung second screen. I would be interested to see if anyone with better tabletPC spec tried this. Thanks, added it to the list. That video was 5 years ago so not sure if it had improved from there. A quick search found that they have developed an app for Android too, but there’s no words about pen support on their website. They seem to focus on external display and RD functions more than inking capabilities.

I also found that Easy Canvas had updated a lot since last time I tried it. It now support extended mode on the iPad, and also had an Android App that support Samsung Spen. Ipad performance was decent last I tried it, and with the 11.99$ one time purchase, it’s promising to be Super Display equivalent on iOS. Definitely gonna try it again when I have time.

" If you wish to turn your iPad Pro into a drawing tablet using the Apple Pencil, we offer an additional in-app purchase called Duet Pro . This subscription has a price of $34.99 USD per year to unlock a whole suite of features including: tailored algorithms for faster drawing response, pressure & tilt control, multi-touch gestures, zoom & pan, hover, line smoothing, color calibration, Pixel Perfect image refresh, and also lets you connect your iPad wirelessly! This in-app subscription is optional and has a price of $34.99 per year, and it is compatible with macOS 10.9 (Mavericks) and later, Windows 10 (64-bit), and iPads with iOS 10 or later that also support Apple Pencil (1st & 2nd Gen)."

I get that developers need to eat, but a subscription model for that is scummy.

Updated to the list so features and price can be compared. Thankfully there’s some cheaper alternatives, some of them offer trial.

So I tried Easy Canvas on iPad again , and it had been a major improvement. I would say it’s on par with Super Display in term of performance and features now, connect is pretty effortless, speed is great. I also found a pleasant surprise: Easy Canvas can co-exist with Super Display. and it didn’t compromise pen performance much! Easy Canvas and Super Display at once. iPad and Samsung connected to same PC...

I’m glad you like it, but to me for anything by very short strokes that lag looks horrific to me.

Two options to add for Linux (although I believe they may also be able to work on Windows?). Admittedly, less polished and a bit more work required, but otoh it’s free (as in cookies and freedom) - and afaik most of the other solutions ignore Linux.

One simple example for a configuration can be found here: 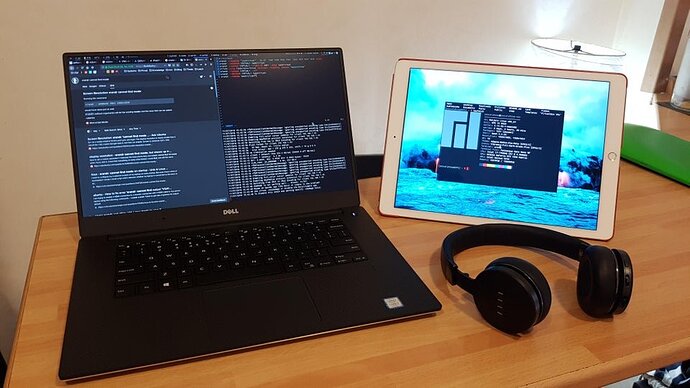 Using Android/PC as a Second Monitor in Linux

Using second monitor is a cool thing that eliminates the burden of changing windows. Windows 10 have already this feature builtin and it is wireless. There are also bunch of apps available to do these…

You can use reverse port binding over adb if a wired connection is preferable, eg (5900 is the default port for vnc)

In this case, your vnc client on the Android device can just connect to localhost at the relevant port (instead of the server machine’s ip address over wifi).

This thread has a wealth of information, albeit aimed mostly at using eink device as secondary screen. Search specifically for comments by user mdp who did some very detailed tests a few years ago:

I’m not sure if this properly fits the bill of this thread, as In not sure if pressure levels etc are transferred. Simple touch input definitely worked when I last tried this out (some time ago).

GitHub - H-M-H/Weylus: Use your tablet as graphic tablet/touch screen on your...

Last time I tried it was a bit unstable, but I’ll be looking at progress as it did seem quite cool, especially as it also aims to support wayland.

Hey, thank you for the input. I have no experience with Linux so my research didn’t cover it. I have read both of the method you mentioned:

There’s a lot of second screen app on the market since like 2012-2013, but they only start to take pen /touch support seriously for the last few years. This list was mainly to show those which support pen and touch and compare their features/performance/price.

I had added your two different method to the list anyway because Linux options are admittedly limited.

After using it more extensively today, I do notice that there is slight lag. Easy canvas is kind of on par with Super Display over USB 2.0 connected to my older laptop, which I consider still very usable, but your standard might be higher. (Also it’s actually USB 2.0 on regular ipad model, Pro models with USB 3.0 might work better.)

One thing I notice is the lack of cursor hover, which can be kind of distracting when the cursor jump from one place to another. No thing can do about it because it’s how the Pencil is designed.

If you’ve seen Brad Colbow’s videos on drawing using SideCar with his Mac and running Photoshop - the drawing experience is just hottible.

This video below from when Sidecar first appeared:

And 4 months ago - go to around 9 minutes in for the recent Sidecar experience with Photoshop. I watched one video where he drew slowly and you could see the Pencil behaving like a dumb capacitive stylus before the software kicks in to create pressure.

Suggests to me that Apple is doing a huge amount of software correction on the pencil even in ordinary iPad mode to “fake” pressure sensitivity. It gets by 99.99% of all users but that fakery in the iPad software just doesn’t kick in when the iPad is connected to a Mac to access desktop Art software.

Tells me just how good a job Astropad were doing before Apple stepped in - sadly, I think a lot of artists just stopped buying Astropad because Apple supposedly had killed off Astropad by setting up Sidecar.

Well, the Apple Pencil is just a capacitive stylus. A lot of the sensors are in the Pencil itself (hence the low battery runtime and why you can use it as a weighing scale if you really want to), the information for which is then sent by Bluetooth to the iPad.

For Sidecar, this will then need to be sent to the Mac, interpreted by the software there, then the video signal sent back.

Well, the Apple Pencil is just a capacitive stylus.

I wasn’t arguing against that - more making the point that Sidecar was seen as effectively killing off Astropad for Mac users when in fact the implementation is shockingly bad.