Going to try sketching on a Panasonic Toughbook CF-33 ( 2-in-1 w. detachable screen )

Well, I’ve taken the plunge, and ordered a refurbished CF-33 From ToughRuggedLaptops. The thing is a bit of a brick, but the screen, which is essentially a tablet computer by itself, isn’t that heavy. It has Double Touch (finger and digital pen) and I saw a demo of someone drawing with the pen on the screen, apparently without problems. I also need a keyboard (don’t like the on-screen “keyboard” thing), and it has a good one. The pen stylus is a CF-VNP023U, a larger size than the skimpy little stick that came with my CF-19.

It will be here in about a week, and I will be reporting on how things go with it. Maybe some photos as well.

Thanks for the Month’s New User Award!

Will look forward to your review!

Thanks, I’m really looking forward to trying it out.

Hi folks! My CF-33 arrived on the 16th. I’m not ready to write a full review, but I can say that I have tried it out for sketching, and it works!
I also found that the version of Win10 on it had two nice little surprises. It included SketchPad and Ink WorkSpace. Plus Paint 3-D.
So here is a quick sketch of a sprinting cheetah from a photo. 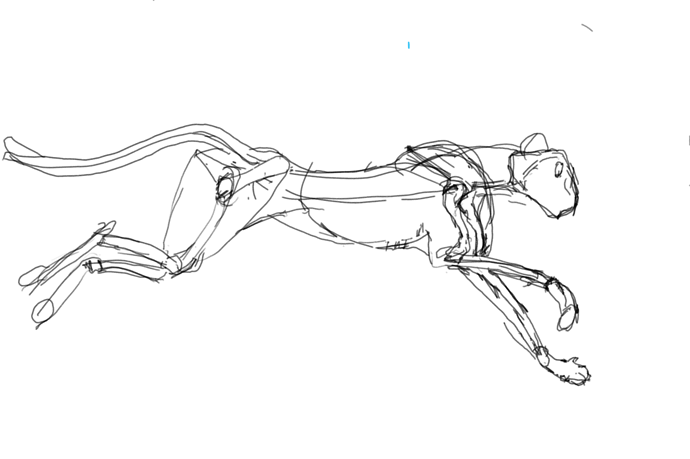 I’ve been slow in exploring my new Panasonic CF-33. Partially because other stuff has kept me busy, and partially because I wanted to make a rescue disk before I plunge in. Had to order a 256 Gig thumb drive to be sure the system had all the capacity needed to make the rescue backup. Well, I got the little critter, plugged it into a USB port and it started blinking, showing that it was ready and willing. So I watched the display bar get longer and it finished up fine. Now that this is done, I’ll start using it for real. During setup, I used my little CF-19s to display the manual for CF-33. Computer helping computer. More later. R-cat

IIRC these Panasonics uses Wacom EMR. You should be able to get much smoother strokes if you use better sketching app. If you dont want yo pay for something, at keast download and ibstall FireAlpaca which is free. I’d like to see you sketch another one with that app jnstead.