The new rule will cover a range of “small and medium-sized portable electronics”, according the EU, including:

Any of these charged using a wired cable will have to have a USB Type-C port, regardless of who makes the devices

They finally did it - tech companies have until 2024 to come to a single common format for phones and tablets - with a follow on date for laptops. 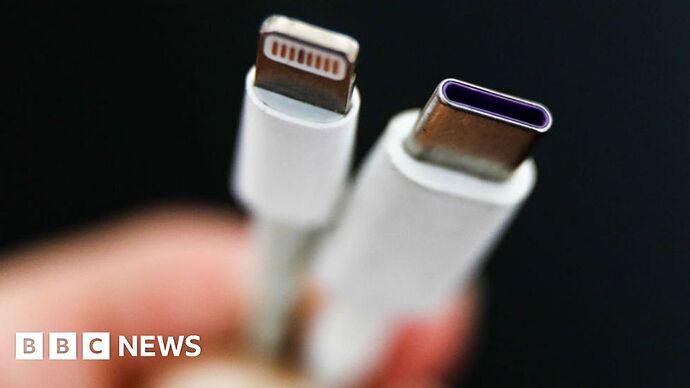 The EU has provisionally agreed new mobile devices must, by autumn 2024, use the same type of charger.

I went on holiday for a week last week with my family and we had one charger but 6 different cables to charge all our devices. I know Apple is against the common format but I think the regulation is a good thing - as long as it allows the industry to move on as new / better technology comes into being.

tech companies have until 2024 to come to a single common format for phones and tablets - with a follow on date for laptops.

I probably use the USB-C port on my Go2 to charge when I’m out of the office far more than the Microsoft magnetic charger/port. I keep a Samsung USB-C plugged into my wall and just plug in the Go2 when I have it home and the battery is depleated. It works fine. It’s great having a charger that works on all of my devices. Good move EU.

I know Apple is against the common format …

Just the iPhone and for a while now that’s been rumored to change in 2023 or 2024 to USB-C like all the other Apple devices, so no effect.

In the meantime a $6 attachment means I don’t need any lightning cables. I think I still have one somewhere because it came with the iPhone. Not sure where I put it though.

Oh, wait, does that mean that the mag safe power connector they’ve just added back to the MacBook Air and Pro 13 are going to be in trouble? Or is it OK because they also have USB-C connections as before that can charge them? The EU can just force Apple to tear off the mag safe omit the magsafe cable (adding more profit!) and leave charging to one of the other connectors.

The smart move by Apple would be to announce that they won’t comply. Make it a chicken race and Apple wins. Europeans are way to enamored with their iToys to let politicians stand in their way to get their grubby little hands on them.

I’m not sure, I’d think that such a move would rather lead to negative publicity for Apple (except among the die hard Apple disciples), especially with environmental issues becoming mainstream. Plus they don’t have as tight a grip on the market as they got in the US.

That said, I think they are still in court about this issue.

I understand how you think, but when you realize that 73 % of all parlimentarians in national assemblies and the European parliament has kids with iPhones the question that will not be debated is that of domestic bliss.

European countries do use iDevices in large numbers of course, but other ecosystems are also popular. Need I remind you that Europe was the bastion of Windows Mobile (if only because of the mole, Elop)?

European countries, in and out of the EU, are willing to tell large companies to not take a hike, but pay up or else. And that else doesn’t involve said companies gaining control. Influence, sure, but think you’re above a democratically elected government and find out at your own peril.

I’m reasonably sure that Apple will comply because it is just easier, but it sure would be fun to watch from the bleachers.

But what’s interesting to me is that according to our legal counsel, Apple is likely to argue that by providing the USBC to lightning cable in the box, they are already compliant with “the spirit and intent” of the law.

The EU are not going to buy that.

But what’s interesting to me is that according to our legal counsel, Apple is likely to argue that by providing the USBC to lightning cable in the box, they are already compliant with “the spirit and intent” of the law.

The EU are not going to buy that.

So this lawyer muses - “What if they just close the system completely and offer MagSafe charging only?” Chaos ensues; lawyers get rich; and consumers are left holding the bag. My guess is iPhone 15 ships with USB-C and lawyers argue that all pre-effective date devices, even if sold currently, are grandfathered…

I think looking at other big-Tech companies the EU has taken on, it will be an interesting fight from the sides but the EU will stick to the policy. The UK having gone “Brexit” have said they won’t enforce the new policy but Apple isn’t going to make a separate charger specifically for the UK. If the US and UK allow charger freedom - Apple will make two versions of charger cable and leave it at that.

If they went down that route, then they’d be facing massive fines. The EU don’t mess around with that sort of stuff. Companies are ultimately subservient to governments.

Now, have they been incredibly shortsighted until recently about semiconductor industry being in the EU? Yes. But that’s not a stick Apple can use.