I finally took the modest plunge and tried out Stardock’s Start11 to get one simple thing back: window names on my taskbar buttons.

I hesitated for a long time because apps that tweak windows could break things, and because I don’t like installing ‘handy utilities’ that may contain backdoors or that might be subverted down the line. Stardock’s US based and has been around forever though, so I decided to risk it.

So far so good. 30-day free trial, $6 for a single machine license, $15 for 5 installs. The main downside imo is that upon initial install, some UI modifications are activated by default. I’d prefer to start from a clean slate and enable tweaks from there. Still, not too hard to disable the initial tweaks.

Pretty happy with the result! Open windows show with their window title on the taskbar on the corresponding screen. Upside, much easier to track down that open document. Downside, taskbar looks a bit more cluttered when many windows are open (duh). Worth it! 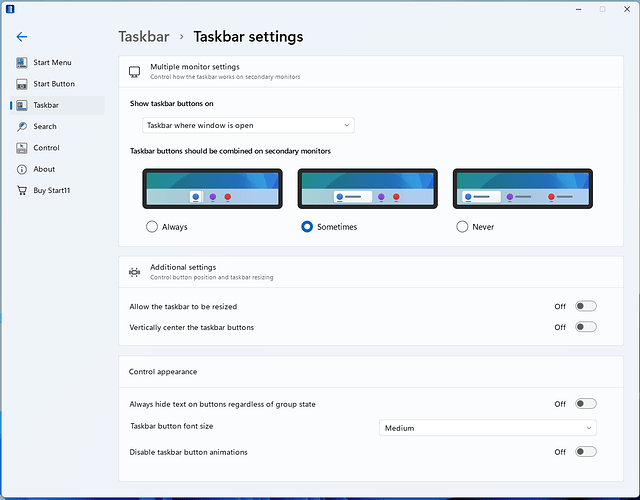 If I were still on Windows, this looks pretty awesome. The pricing isn’t that descriptive. It’s $6 for ever, just 30 days of support or is it a subscription thing?

The pricing isn’t that descriptive. It’s $6 for ever, just 30 days of support or is it a subscription thing?

Pretty sure it’s a one-time purchase, with 30-day customer support as far as I understand.

$6 forever. Forever is as long as Microsoft call it Windows 11, or at least that’s Stardock’s track record so far. I’ve paid them for Start8 and then upgrades to Start10 and Start11. They do offer upgrade discounts, which is nice.

I also purchased AllStartBack. Start11 is an intensive rewriting of the taskbar, but as a result is still limited by the Windows 11 taskbar. AllStartBack is mostly just enabling the hidden Windows 10 taskbar, so does have some things like vertical taskbars.

I experienced some instability so, aren’t using them at the moment. I also like the weather widget, which both don’t have.

I paid and installed Start11 on my SP7 and I’m quite happy with it, but when I press the start button most of the time the Windows11 startup page first appears and then I have to press again the start button to get the Start11 (I chose Windows 10 appearance) one.

I’ve tried different configurations but I did not manage to sort it out, and I ended up living with this annoying flaw.