Boy this sends me way back. I was a source user and it was a good venue for information on things like the Apple II and Commodore Vic 20 ( I had both)

The iPad truly would have been Buck Rogers level tech then.

A series of transcripts lets us explore the world of Telenet, Dialcom, and The Source.

PS: The authors writing style is…lets just say “unique” but it’s still worth a read. And the source also had one of the first appearances of what would become Zork

My first online experience was with free BBSes. First paid service was Compu$erve.

On Tuesday’s MacBreak Weekly they discussed that AOL still 1.8 million dial up customers that will be cut off at the end of the month by non-dial up support. Apparently many don’t even know they are still being billed for the dial up charge…gotta love Verizon…

Whoever came up with Auto-Pay is a genius.

I too started on the free BBS sites. I would connect via my telephone line and the 300 baud modem in my Tandy 102/NEC PC-8201a. When I took my first law job as a federal law clerk in Louisiana, we had the government net, which was a form of packet mail that would circulate the entire country in 24 hours. So, you could send an email that would be received within 24 hours and you could get a reply the next day. Sure beat the 4 or 5 days it would take for a letter to get from New Orleans to the east coast via snail mail. FedX was expensive. All connections were via copper telephone lines.

One local BBS hosted a game called Starclash. It was a space game, much like Hammurabi, played over that packet switching network, where you would leave commands to build colonies, ships, move them or attack and check back the next day to see what your moves accomplished and what your opponents did. I was obsessed with that game.

Amazing how some things haven’t changed though… 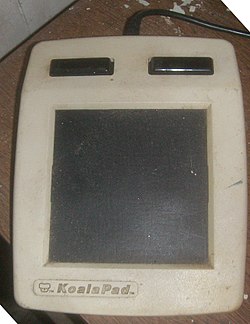 The KoalaPad is a graphics tablet, released in 1983 by U.S. company Koala Technologies Corporation, for the Apple II, TRS-80 Color Computer (as the TRS-80 Touch Pad), Atari 8-bit family, and Commodore 64, as well as for the IBM PC. Originally designed by Dr. David Thornburg as a low-cost computer drawing tool for schools, the Koala Pad and the bundled drawing program, KoalaPainter, was popular with home users as well. KoalaPainter was called KoalaPaint in some versions for the Apple II, and PC D...