And Apple wonders why they sometimes get accused of software bloat

I downloaded the Apple TV preview for Windows today. I have a bunch of movies in my itunes library and I was curious if it, like the Disney app, allows higher quality playback than the web browser which is limited to 1080p SDR.

So the good news is that yes it does all the way up to 4k HDR with dolby vision.

But does the player really need to be 180 Mb in size?

And FWIW, I’d wait a bit unless watching the content on a Windows system is absolute top priority as to the say the app is both buggy and has some rough edges is an understatement including blue screening my surface pro twice so far.

Nice of you to take one for the team! I’ll wait until you report the “All Clear” thank you! 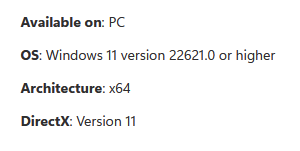 Why would Apple want to advance MS’s ARM hopes and dreams?

It does run in x86 emulation on my pro 9 5g reasonably fast, though like I said in my original post, still has significant stability issues.

BTW: Not clear as to why, but the first time you launch it on an ARM system, it takes a REALLY long time to load, so much so you might think it’s hung.

Subsequent launches are a lot faster. And our writer that has a Galaxy Book (ARM) also confirms it runs reasonably well after the first launch and the videos look very good on the OLED display

Just saw a post about this - ArsTechnica - but no mention of problems, other than sluggishness at times, in the article or comments (the comments, however, jump all over the place in Apple/Windows interfacing and other iTunes alternatives).

We’re not the only place folks stray from the topic…

Oh very nice. I tried Apple TV on my GBook2 a few times, and it just couldn’t seem to handle the web interface. Looking forward to trying this out.

But does the player really need to be 180 Mb in size?

That’s interesting. I have no clue at the moment.

I’m out of the office today, but I’ll follow up with the engineer Monday and see what she may (or may not) have done.

@JoeS Update, the engineer I mentioned does have a Galaxy Book, but she must be one of the 100 or so people that were able to buy the intel version before Samsung rapidly discontinued it.

I did reach out to Apple to see if/when WOA native support is coming, and I’ll let you know what they say

The 850 isn’t able to run emulated apps with the GPU so if that is a requirement for the Apple TV app, I could see you getting the error…

I hadn’t thought of that, but you are likely correct. Especially for 4k and/or HDR streams it likely uses a codec designed for a GPU.

If that’s the case, native may be the only hope as even the 850 does have graphics cores, that would just need to be accessed.