What’s working for you? What isn’t? What would you like to try next?

From traditional desk & chair to monitor+keyboard mounted on a treadmill, there are lots of options nowadays. Show and tell time!

Me, I have been traditional my entire life: computer desk, keyboard tray, office chair. The latter I upgraded to a Herman Miller Mirra about 15 years ago due to ongoing back & neck issues. It wasn’t perfect but it helped. 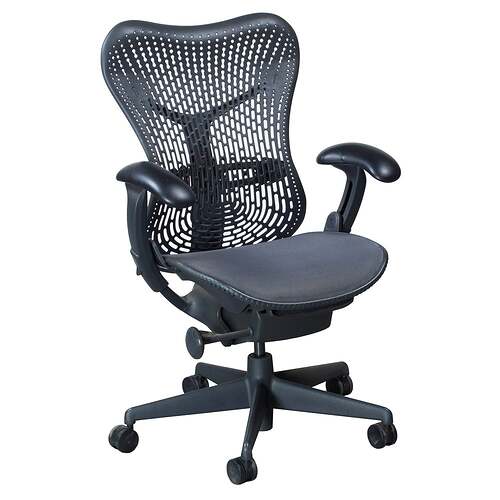 image1500×1500 189 KB
Alas, even a Herman Miller wears out. Mine was splitting up the back, all the plastic broken with just a quarter inch left at the top before it would come apart. I used velcro ties to hold it together until I could get a replacement.

Last week I came across a lightning deal on one of those cheap knock-off kneeling chairs so I went for it. Then I did my research (I know, backwards) and ended up canceling and buying the original Varier Variable Balans. 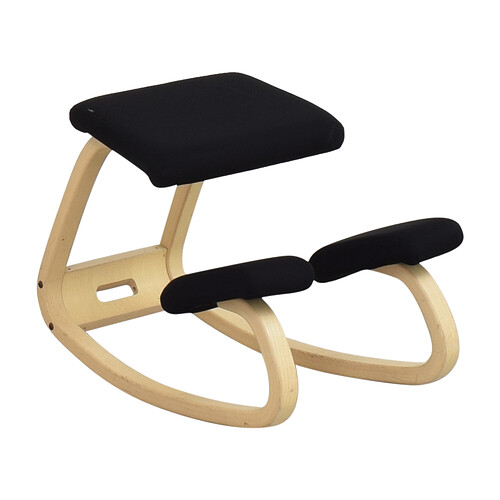 image2000×2000 189 KB
Expensive suckers! Why, the price is almost as much as I paid for the Herman Miller at a liquidation outlet… okay, I’ve paid more and didn’t regret. As a bonus, I found one used/like new at half price so the pain is less. It doesn’t arrive till Friday and I’ll write more after I use it a while.

I was tempted by sit/standup options like these wobble chairs… 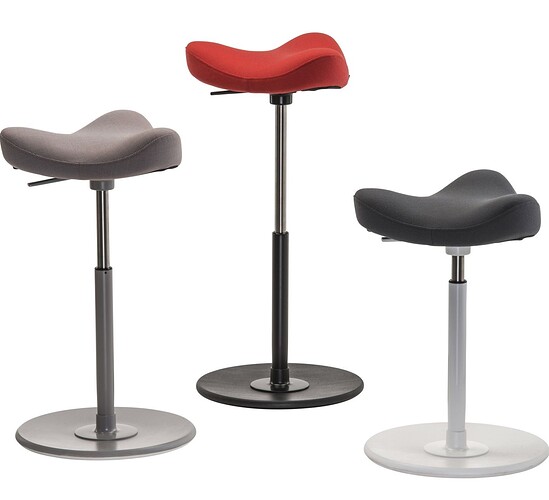 Now that I’m working from home hopefully permanently, I’ve invested in a few things to make my workspace better, and have a couple more things I’ll eventually want.

I have one of those automatic sit/standing desks that I got from Costco. It’s much smaller than my last desk, but so far I like the variety of changing positions. I usually switch up every hour or so.

I also have a Kinesis RGB Edge split keyboard, which takes up a lot of space on my desk, along with my 27"? monitor with my MBP on a laptop stand as second screen take up the rest of the space.

I have 2 things left on my workspace wishlist. I want a balance board of some sort for when I’m standing, and I would like a nicer office chair. My current one is several years old and pretty basic. I can’t really decide on the style I want though. I don’t usually like arms on my chairs, but I’m considering it since I’m standing half the time anyway.

But I keep my Dell Canvas around for reviewing documents, so it kind of feels like I can spread out 3 sheets of paper that I’m editing on top of a desk.

Herman Miller chairs are fantastic. But I wound up buying a mesh chair from Staples on sale for $100.

I’ve set up speakers along with a tube amp to play hi-fi musical bliss when I’m doing CAD/modeling work.

Lately, my favorite hack is to keep a golf club (9-iron) and putter nearby, so I can periodically do something athletic instead of sitting around for hours. I especially do a bunch of swing practice during “all hands” meetings where I merely have to listen.

There are times I miss the social atmosphere of an office, but I wouldn’t trade the ability to set up your home office into an inspiring fun activity area.

I’m currently using a knock-off Balans chair on wheels at my desk in the den in the basement where I have my desk — it gets used 3 days a week for working remotely — I should use it for personal work at other times, but not wild about being stuck in the basement that much. I’d definitely like to get one of the originals.

Usually I work in a chair in the living room w/ a tablet on the arm of the chair, or in my lap, or on a cedar chest which doubles as a coffee table, or on a Levenger lap desk, or kneeling on the floor w/ the tablet on the cedar chest.

I have a sit/stand desk, I have also invested in a Steelcase Gesture (Stool version) for my work from home setup. I have my monitor at the right level to reduce strain.