As much as I am loathe to have all my data controlled externally, I think it’s still worth examining the burgeoning solutions that let you run a full virtual x86 Windows PC on the cloud.

Many articles may cover this from a general keyboard/mouse user’s perspective, but not from a TPCRer’s perspective…so let’s look at things like pen latency and pressure response, video stream quality, frame rates over the cloud, and see if they hold up in lieu of our oh-so-antiquated tablet PCs.

Since @Desertlap posted about using Windows 365, he gets the first barrage of questions.

If you use Cloud Windows AKA Windows 365, file explorer has access to the user accessible portions of the IOS file system (documents, downloads desktop). Not sure it’s worth $30 a month though

So how is the pen and touch latency in an app like OneNote? Can you ink quickly without stroke jankiness (eg. like hooked "t"s, and compressed “e” and "o"s)?

And out of curiosity, what does $30/mo. get you in terms of “specs” for the virtual machine? Is 3D rendering/gaming possible? 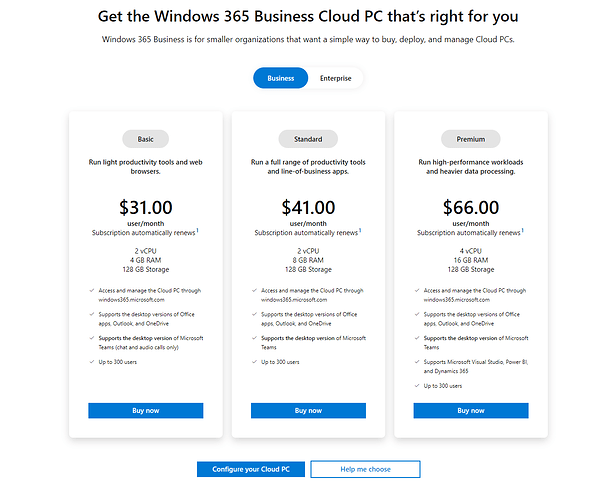 So for $30 not so much, there are also some higher SKUs available for as much as $130 USD/MO

So i just this week started to really dive in to it, primarily because I just purchased a base level Mac Studio for home replacing a 27 inch iMac which I used boot camp on.

Pen and touch latency is present but is adequate and for reasons I don’t understand yet, varies considerably from app to App. So specifically One Note is one of the better ones, but Adobe Acrobat is a trainwreck.

So there is some inconsistency with what you’d think would be with a “web app” and/or virtualization Panning and zooming in various apps and docs is remarkably fluid, but things like some PowerPoint transitions can be glacial.

Weve tried using our internal testing tools , but I don’t at all believe the numbers they give as I’ve seen everywhere from 15ms to 128ms with the Apple Pencil and similar with touch. I absolutely think it’s down to the tool not being designed for what I’m trying to test.

$30 gets you a fairly basic machine spec wise with 4GB RAM and 128GB of storage and a “dual core” processor. That’s because I really only need it for running some custom MS Access apps . Gaming is predictably bad, but not all always again for reasons I don’t understand yet and has already surprised me a couple of times eg. The game Cuphead is actually playable.

TLDR we’ve heard that the backend processing is highly distributed with W365 and there appears to be a lot of custom “tuning” for lack of a better term, for things that they assume users are doing most.

And there are multiple tiers of performance. with prices to match up to 16GB of RAM though no dedicated graphics options yet (rumor is that AMD radeon is coming)

And storage is currently capped at 128GB regardless of tier though allegedly some key customers have access to more.

I will say though, at least at the moment AWS is far more scalable generally, though it requires considerably more effort to setup and maintain. But OTOH AWS lacks the nifty android and IOS apps…

You can custom configure up to 512GB of Storage, but they are also pushing the fact that M365 users also have 1TB of OneDrive storage. During the preview, they had a dGPU SKU, but I believe these are now request only through MS Field or Partner 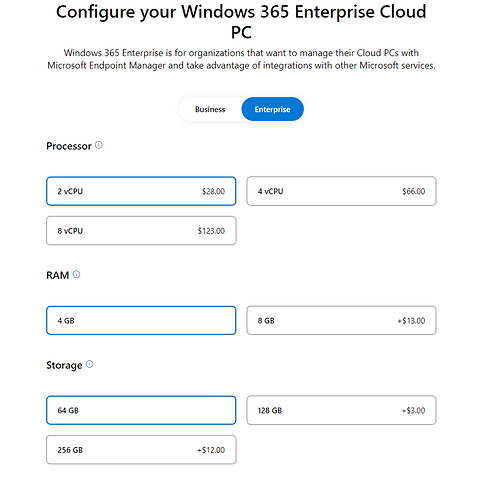 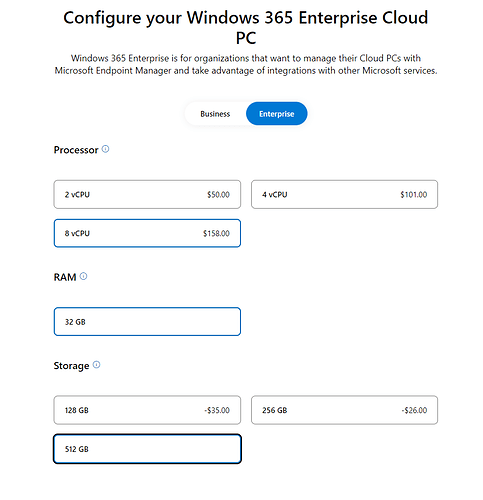