I think MS made a mistake with the the Pro 9 lineup by making the ARM version come with 5G and not offering a WIFI only model.

It seems to be a device targeted at executives who use Office and who conference with Teams all the time. Price insensitive customers with low requirements for a device as long as it can do those simple tasks well. And with style.

I would actually agree with you that they seem to have, not abandoned exactly, the consumer market for a WOA surface, but the focus most definitely is the corporate/Teams market.

OTOH by doing what they did, they kind of make it self fulfilling too. And it probably didn’t help that they likely heard the same thing we did from retailers like Best Buy, that the Pro X had one of the highest return rates.

Does this performance and efficiency core process management also extend to heterogenous Intel processors with P and E cores as well?

Yes, which is why you definitely don’t want to run Windows 10 on 12th gen Core I

Cross quoting from the SP9 thread:

In the meantime, I think I could recompile the application and get it working

This probably quickly gets too technical, but what property of a piece of software causes trouble in emulation? I guess “custom DLLs” but I don’t know enough about emulation to understand what fails, or how common that is.

I am familiar with the application since I am a volunteer community builder for them. The part that is not working is the video camera view of the 3D printer is freezing at the first frame. I am not certain which part it is exactly, but I suspect it is the decryption library since the video feed is tunneled from an encrypted cloud connection to the 3D printing program.

I suspect that Valve’s Proton holds the key. That works like magic compared to Microsoft’s miserable efforts with their own DirectX support.

It looks like someone already put two and two together on the Linux front! At this past weekend's FOSDEM 2022 virtual event, a status update was provided on Mesa's 'TURNIP' Vulkan open-source driver that provides accelerated support for Qualcomm Adreno graphics. 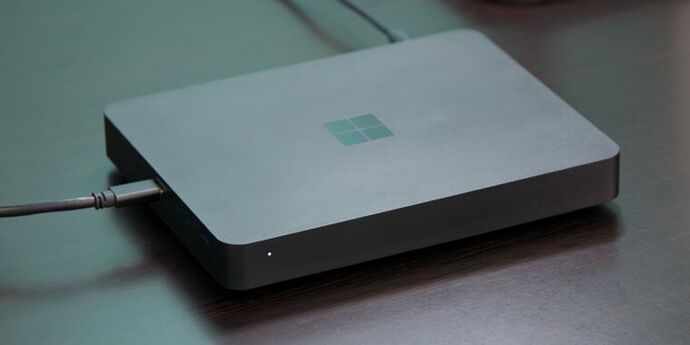 There's a reason it isn't a Surface PC, but it's good for its intended purpose.

I think they missed the point a bit, though it is a solid review. If you actually talk with any MS person, they 100% position it as a development tool (and for that it’s quite solid, and not as general purpose PC and I think anyone that buys one for other purposes should have perhaps spent their money elsewhere.

I think they missed the point a bit, though it is a solid review.

Yeah they mostly say the right things, but they still use the Dev Box as an excuse to highlight that an ARM PC is not a perfect standalone PC system for the common user. Thanks Ars, I think we’ve heard that before.

BTW I haven’t looked at any standalone compact desktop PCs in decades, but if a consumer had $600 for buying a compact desktop PC with a similar storage specs and number of ports (meaning they wouldn’t need to buy a dock), what should they get instead? Is there anything around that is as sleek for that kind of price point?

Some of the small form factor PCs from Asus and Lenovo when you buy them on sale (and there are always at least a couple models on sale from Lenovo).

And of course if the functionality of a small form factor PC is paramount, if you can deal with MacOS, but the Mac M1 Mini is IMHO hands down the best bang for the buck device in the space. We have a significant number of customers that have bought them for various purposes including as dev boxes for WOA (thanks to parallels) .

And it’s a sad commentary that even with the additional overhead of parallels, the M1 Mini outperforms the Volterra across the board, sometimes dramatically so (compiles for instance)

And it’s a sad commentary that even with the additional overhead of parallels, the M1 Mini outperforms the Volterra across the board, sometimes dramatically so (compiles for instance

As I’ve commented before, I was pleasantly surprised by the performance of Win11 WOA via Parallels on an M1 Mac mini a year ago. And that was a WOA dev beta. No doubt both it, in full release now, and Parallels with another year’s work, have made the experience even better.

BTW, user ikjadoon on Ars made the following important observation for those interested in buying the Dev kit:

Just a heads up: Microsoft has a strict no-returns policy with this Dev Kit.

The comment got a lot of downvotes seemingly because “what else would you expect”, but personally I hadn’t realized this.

It is still a good compromise for buying a 32GB RAM mini PC for sub 600$. If it run x86 apps better than an intel M3 then it’s good enough for me.

As big fan of NUC’s I’m somewhat loving the idea of the Volterra. If it had at least 3-4 4K/60HZ monitor support, I might have already bought one.

Frankly, given this is using the same guts as the Surface Pro 9 5G, there really isn’t any valid reason why this couldn’t technically serve as a everyday persons desktop, given the Pro 9 5G is being marketed to serve the everyday user. Anyone who used a Pro X as their daily driver could easily adapt to this box.

But I must admit having this thing released along with the Studio 2+ seems cruel since this is the perfect solution for those of use hoping and wishing they would release a stand alone Studio Monitor with the computer part separate. This is quite literally halfway there, they could probably just throw the Laptop Studio guts in that Volterra Box and call it a day. Put in a nice 12th gen CPU with an Arc Graphics solution, and you could have a very popular little mini-desktop box to rival the NUCs.

One thing I’m curious about though is the Stackability feature that seems to be unaddressed, where you can stack a second Voltarra on top and boost performance. Sort of like a modular equivalent of what Apple did with the M1 Pro/Max/Ultra by just stacking the same chip set over and over.

As big fan of NUC’s I’m somewhat loving the idea of the Volterra.

Same here, it’s just so dang clean and yet full featured. Maybe at some point these will start showing up on eBay when consumers run into WOA limitations and the no returns policy.

Also an NUC fan here. I use mines as my HTPC, but I could see myself getting one in a year or two to replace it. Or really any ARM based Windows device this size or the Mac Mini.

Part two of ARS Technica story of the beginnings of ARM. Both this and part one are well worth the read for those interested in WOA, Apple , and the potential of RISC based designs. This is also one of the things ARS does very well.

A history of ARM, part 2: Everything starts to come together | Ars Technica

Thank you very much, Desertlap, for sharing these interesting articles. I started to read part 1 and couldn’t stop until the end of part 2. I’m looking forward the arrival of part 3.