This is the main thread designated for discussion about Valve’s Steam Deck handheld gaming PC. Today (2022/02/07), the first round of review embargos was lifted to discuss hardware without going into the software details of the device. As expected, the Steam Deck is giving a strong showing in performance versus any other handheld gaming PC on the market. I will personally have one in hand in the next few weeks and will be posting a textual review once I do.

Steam Deck is a powerful handheld gaming PC that delivers the Steam games and features you love. As a quick plug, I am good friends with the owners of the SteamDeck.community forum. I highly recommend giving their site a visit if you want to discuss the Steam Deck thoroughly with other Deck users in a classic forum environment. As a little bit of background, I actually had owned their very domain, but due to competing priorities, I opted to sell it on the open market. The forum owners approached me via Porkbun’s domain marketplace about purchasing, we came to an agreement on a reasonable sale price, and the rest is history.

If you haven’t pre-ordered, good luck getting one this side of 2023 though. And while about double the price, the next AYA gaming tablet will be out by then with Zen 3 and also have RDNA 2 too.

It’ll be interesting to see if this does take powerful x86 tablets mainstream.

And while about double the price, the next AYA gaming tablet will be out by then with Zen 3 and also have RDNA 2 too.

While this is true, I strongly discourage purchasing any of these Chinese handheld gaming PCs. I have read the reports too many times and I can tell you there have been way too high of failure rates, abysmal build quality, and terrible warranty support which is absolutely unacceptable for the asking price. Imagine this. By the time you get your unit warranty serviced after half a year of it sitting on some dusty old shelf in a random dank sweatshop and then it traveling by snail’s pace surface mail and you dumping moola into shipping plus more moola for warranty service they should have covered for you, you will have a Steam Deck in hand by then and it may still be damaged or have acquired new damage after it was purportedly “repaired.” Oh, and don’t get me started on how GPD backpedaled on promised features before and then told their backers to stick it or just solder a new part on themselves as if soldering a BGA chip is something a normal end user will be remotely capable of doing. Friends don’t tell friends to buy from these bandits.

@Hifihedgehog - agreed. I always consider anything bought direct from a Chinese company to be completely without warranty, throw away if defective, caveat emptor. I still get some things via AliExpress, et al, and take my chances with the knowledge and acceptance that it could be money wasted.

I’m cautious and hesitant to buy from Chinese companies for those reasons (amongst others not suitable for here), but that comes across as a bit prejudice.

We have people here using Boox devices that are happy with them. They too are a Chinese OEM.

I just don’t like the almost saviour like reputation that Valve have been attracting. ■■■■, they too have a spotty history in terms of sticking with projects, which nowhere near as bad as the likes of GPD, isn’t great.

The stock supply issue also seems to be in part an oversight by them.

I’m also not so keen on a company undercutting others using their other revenue streams on what is an open platform (or quite accesible in terms of Windows). It’s one thing for Sony or Microsoft to prop up their hardware in their closed ecosystems; this is another.

@Tams - I should’ve qualified that by saying Chinese companies with no history of safe dealings. I have no problem with Boox or others like them and have recommended them to people myself. They have a good track record.

I used to really hate Steam and the growing dominance they had with game distribution (e.g. you couldn’t buy a Bethesda game without going with Steam & DRM). But they’ve grown on me and haven’t been as abusive as I feared.

If you want a solid laugh, read this propaganda piece from GPD. It is laughably bad and patently false too:

r/SteamDeck - GPD: Steam Deck is WORSE than WIN 3, it is a Closed Platform,...

GPD replied : (9 likes) Let me tell you, as long as there would be a pirated equivalent online, I will not pay the real game, people will not pay for the real game. I never say pirating is an advantage, but I do believe if you’re able to find a pirated version then you definitely should play it, you’re better than 99% of the people. …

I agree with this sentiment fully. There are many good Chinese origin brands, such as DJI in drones and Lenovo in computers. It is many of the smaller ones you have be careful of, such as the Pepper Jobs monitor snafu that you may remember well on the old forums where they falsely claimed that I had damaged it. That said, there was a different small monitor brand, Magedok, I bought from on Amazon and they were a totally different story in a positive light. When their monitor had a dead pixel which appeared sometime after the Amazon return window, they stood behind their advertised warranty wholeheartedly and they provided me a replacement without any hassle at all. So I would say there are many bad Chinese brands to watch out for, but certainly not all of them and also certainly not most of them either.

Aya seem to have shown themselves well so far. And they are in competition in this area.

Sure, for people who wanted to upgrade their existing Neos to better triggers, etc. they expected people to open up the device and install them themselves. But really that’s on the users as they wanted something beyond the specs they were sold.

I just think such a drastic stance isn’t fair.

I think what we should care about the most is not about buying Chinese devices, but about buying from a trustworthy source with official presence in your country. XP-PEN, nook tablet etc are well known brand selling on Amazon, with generous return window and uncontrolled review sections, so the customer support after care are usually good to avoid low rating review.

GPD and Aya Neo are mostly funding their items from crowdfunding sources and still sell their devices there, which by itself is a red flag. If an established company can’t manage their own cash flow and keep depending on crowdfunding source even after 5-6 years in operation, there’s no warranties that they can also provide extra parts/ support after that funding dry out.

Also crowdfunding websites offer absolute no protection for payer, your money isn’t a purchasing transaction, but an act of investing, and that investment bring return or not is at your own risk. I have seen many vaporware crowdfunding projects raised hundreds thousands dollars, by unknown companies without any credentials/real person information , a few 3d rendered pictures and empty promise; all the backer was left scammed without any way to chase down the unidentified scammer, kickstarter washed their hand off it after taking 10% cut telling the backer they are on their own to chase down and take legal actions against the scammer in some other countries.

While that wasn’t the case of GPD or Aya neo, just know that even if you receive your devices, those companies can down right refuse warranty with the excuse of lacking funding and there is nothing you can do, because by backing a cowdfunding, you are not purchasing an item, but investing in the creation of an item, which is considered done the moment you received it. 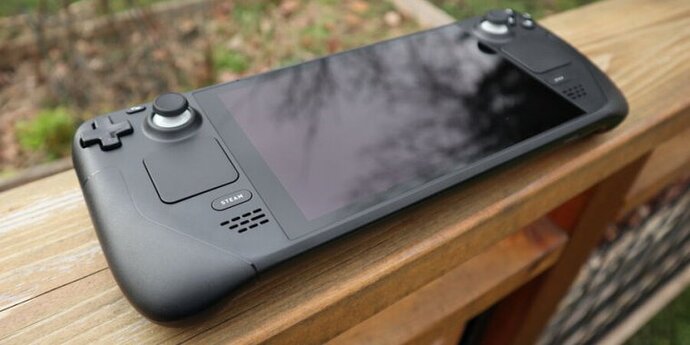 Power, battery, software compatibility, and too many random crashes: Let's dig in.

I’m not all that surprised that the software still seems to be a bit of a cluster**** according to all the reviews I’ve seen; as soon as all the preview videos came out a few weeks ago and everyone said they weren’t allowed to show Steam OS, I had a feeling it was going to be a rough launch.

It was so blatant.

I found out the hard way during my Linux experiments that Steam’s Proton by itself was (is) usually suboptimal. The way to get it closer to acceptable was to use the Glorious Eggroll custom proton from Github.

I bought a second hand OneXPlayer and used it over Christmas. I loved it. A great device and Windows worked perfectly fine as the screen resolution wasn’t stupidly low. My ‘only’ gripe rested on the top trigger buttons. If you’re playing Street Fighter, with the bottom left D-pad, you have to stretch your fingers/hand up to hit the trigger buttons.

I’d love a OneXplayer mini. None of the other portable devices interest me, but Aya Neo’s new devices look pretty good (as above, it’s a bit odd to see crowdfunding). Additionally, it’s a little bit pointless to game on a OneX when the Surface Pro 8 beside me has, nearly, the same cpu.

Lest we forget about Steam Machines! (I might grab a Deck second hand, when possible).

I’m planning to cancel my reservation and have the $5 enrich my Steam Wallet.

Eventually. I’m still curious enough to let it ride until people get them into their hands and give impressions (e.g. @Hifihedgehog )

As to rabid fans… well, Linux has a fair few and console gamers can be partisan to an insane degree. Combine the two and it’s not good. I just stay away from such venues and be thankful there’s a place like this for discussion.

From what I understand, Aya are still a relatively small operation, so really need the crowdfunding to get production going. And to gauge actual interest.

I’m very sceptical of many crowdfunded projects, especially outside Kickstarter (as all the other platforms let the projects run with your money). But Aya have been one of the few that have shown themselves to be trustworthy so far.

As for the Linux and console crowds… yeah, nah.

The console lot are superficial, so it’s not really an issue; just noise. Probably a lot of teenage agnst.

The Linux lot can be downright nasty and condescending (even the ‘we’ll help with everything’ comments usually come across as snide to me). And many of them seem to be from people old enough to know better. A lot of commentators and a few reviewers seem to forget that we’ve already experienced these devices or, at least, know that they exist. Is Valve splashing the perks? I’ll admit that it does all seem and look nice.

I’m eyeing up another OneXplayer but really want the mini.