New versions of the Galaxy Tab S6 Lite could be released very soon, at least that’s what its passage through various certification sites suggests. The variants of the Samsung tablet should run Android 12 and with the Snapdragon 720G processor at the...

New tablet would with s-pen would probably be SM- P613 and SM-P619. Not sure if the number difference is just different region model. Snapdragon 720G might make it closer in price to the Tab S7 FE than the Tab S6 lite, but it’s depends on size as well.

There seem to be several SM-Txxx models coming too. While pen versions usually start with a P, there is exceptions, as the Tab S7 FE is SM-T735.

I’ve always read that Google don’t support older model Android devices for long, so Samsung making variants of a 3 year old device is a bit weird?
I just checked and a brand new 2019 Tab-S6 lite is now only £299. ($299 in the USA)

I think the new tablet would be more like a Tab S8 FE /lite and the link to the Tab S6 lite is probably just a mistake /temporary link to a similar device before they make a new page for the new tablet.

The Tab S6 lite was frequently on sale at ~250$ before it was discontinued. If it keep the old size, hopefully the upgrades from Snapdragon 6xx to 7xx doesn’t warrant too significant price increase. (I believe the price of the tab S7 FE mostly come from the big 12.9 screen).

Also 720G was and older chip than the 750G in the Tab S7 FE, and if it was of same size as the S6 lite then there is high chance it would be in the same price range as the tab S6 lite.

A shame there’s no longer 8" S-pen tablet. That size is a lot more convenient to carry along now that coffee shop are open and crowded, table space is so tiny that a full sized tablet is a tight squeeze putting together with the drink. After all my efforts to squeeze more life out of my Galaxy Note 8.0, it seem to have reached end of life with an almost dead battery and failing storage.

8" S-pen tablet. That size is a lot more convenient to carry along now that coffee shop are open and crowded

I want bigger and not smaller for portable sketching. Maybe because I prefer my own coffee made at home but I’ve never gotten into taking my tech into coffee shops.

I think the new tablet would be more like a Tab S8 FE /lite and the link to the Tab S6 lite is probably just a mistake /temporary link to a similar device before they make a new page for the new tablet.

Don’t get me wrong - the more alternatives there are for Artists, the better. I’m excited for what Samsung can produce, glad they haven’t given up on Android even if Google don’t really push the tablet capabilities to encourage others.

There is many big penabled tablet still being on the market ( 10" and up ) like Samsung Tab S8 plus/ultra on the high end, Samsung Tab S7 FE and Xiaomi Pad 5 on the mid range, budget section have the Lenovo M1 plus and Tab S6 lite if you can still score one.

On the other hand, 8" tablet seem to be abandoned, there’s not even a single penabled Android /non folding tablet in that size being sold right now (probably except the rugged Samsung one that doesn’t seem to be on the consumer market). I love that size that it’s just right to bring in all occasions: my cramped office desk, a stroll in the neighborhood, the cafe that use tiny desks to utilize as much space as possible. My bag is just big enough
to squeeze in a 10 incher and nothing else, and i fear it would bend inside with the thinness of a modern tablet. There is a reason the ipad mini was so popular despite its high price.

Perhaps most exciting to this board, we’ve heard from our partners in South Koreas rumors of a Tab S8 Mini with S-pen

Allegedly Samsung has both seen Apple’s renewed success with the iPad mini, and also believes that it’s in the interests of the Samsung tablet line generally to “fill in a major hole in the current lineup”

The leaks say 8.5 inch possibly OLED screen with the same aspect ratio as the rest of the Tab S line, as well as the same processor and storage options. Nothing whatsoever on pricing, but availability possibly in Q4

Well, there is… I’m not sure how even enterprises accept the price though (really no other choice I guess).

That said, Boston Dynamics have chosen it as their poison for their new controller for Spot.

Perhaps most exciting to this board, we’ve heard from our partners in South Koreas rumors of a Tab S8 Mini with S-pen

If it has pogo pins on the bottom and therefore possibly a keyboard cover… it won’t, will it? And Windows would be asking too much.

@Tams you never know with Samsung , but I doubt the keyboard even more than the possibility of the device itself.

As to a windows device, again because it’s Samsung I’d never completely rule that out, but the rumors come adjacent to the phone/tablet division and Windows devices are a separate business unit.

They seem to have given up on Windows tablets (hardly surprising given Microsoft’s apparent lack of any real interest and with Surface no longer being something to spur OEMs on and a competitor).

And yes, I don’t think there’s a chance in

of there being a detachable keyboard on any 8" device. That’ll remain in the realm of attached ones made by Chinese OEMs (well, other than Onexplayer’s terrible one).

A shame there’s no longer 8" S-pen tablet. That size is a lot more convenient to carry along now that coffee shop are open and crowded, table space is so tiny that a full sized tablet is a tight squeeze putting together with the drink

Don’t believe we’ll ever see a device like that again. It will be covered by foldables, once unfolded that is pretty much their size segment. 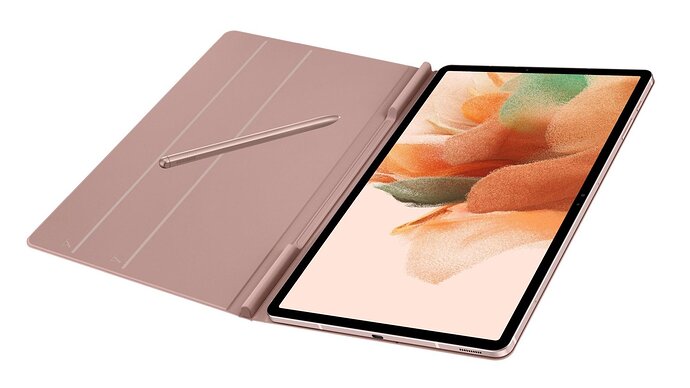 More information about new tablets. They guessed the tab s7 FE successor will shrink to 11", which doesn’t quite make sense considering the tab S6 lite successor will likely be 10.4", the size difference negligible.

Fascinating but I’m all out on a 14.6 portable tablet. I just can’t see myself going smaller.

Unfortunately, that size is too niche for tablets that it is only available on most expensive range ( Tab S8 Ultra). At least it actually exist and still available.

So interesting anecdotal data points to the size discussion. Our Samsung Rep told us that the S8 + has been the fastest selling in this generation with the Ultra being a close second and the regular S8 in third place.

Samsung attributes that both to work from home /productivity where those sizes get closer to the standard laptop size and in the case of the ultra very high use of the pen as many want a bigger canvas. It’s unclear what data they are basing those assertions on, but intriguing regardless.

Goes to show that there has been a hidden demand for large size tablets. Be interesting to see if Apple will release a contender.

Interesting that sales of the tab S8 Ultra surpass the regular Tab S8, considering it’s supposedly limit in number produced. The Tab S8 Ultra was never available in our mainstream local stores and only availabe as pre-order in small importing stores.

Now if only the Tab S8 Ultra become as popular as the 12.9 iPad, maybe one day I can acquire it for lower price as used item. This tablet is so niche that the chance it eventually turn up in the used market for reasonable price is extremely low.

Be interesting to see if Apple will release a contender.

It will still just run iOS. For media consumption - that would be great but a horrible use of all that power until Apple runs a pro version of iOS. (Bet they only release it for the most costly iPads)

Those sales shifts might be specific to the US and South Korea (Samsung’s home) markets and not world wide. Apple often has had similar outliers in the past such as the standard iPad being the biggest seller in most markets whereas older versions of the mini often out sold the standard iPad in Japan

I wonder if in their interpretation of their sales data they have accounted for the possibility that at least for some people the lack of old on the “smaller” basic Tab S7/8 could play a role in going for the plus versions instead?
For me, this restriction actually strengthened my decision to buy a used TabS6 rather than the S7 or S8, since I want a relatively small form factor, but don’t want to give up on OLED. In my case, I might have been ok with trying it the slightly larger device if I could have kept display type stable, but giving up on OLED and using an unwieldier/heavier device just want an interesting option for me. But other people might go for the bigger device not because they want the bigger device, but the better screen.

I might have been curious about the 120Hz screen in the regular Tab S7/S8, but I honestly didn’t find going from 60Hz to 100Hz on my regular computer display to be particularly noticeable, so not sure if that would be worth giving up on the OLED. I can see a difference when scrolling (tried it out on a Tab S7 on display at an electronics shop and on my wife’s S20 FE), but I’m not sure if it feels a life changing as some people’s comments online made me expect it to be.

I don’t really know myself. Samsung reps often make statements that are both tuned to their audience and of course designed to put Samsung in the best light. And that’s exactly what they should do IMHO.

Speaking for myself, the 10-11 inch size seems to be very much the sweet spot for any device that will get primary use as a tablet. And that comes from both originally purchasing the 12.9 iPad Pro before selling it and going to “down” to the 11, but also with my use of the Pro 8 which while it’s great for many work productivity tasks, still feels both big and clumsy at times when I’m using it as a tablet.

I’ve used the Tab S8 +, but not extensively. One thing that put me off about it at least initially though wasn’t the size per se, but the aspect ratio. OTOH it certainly felt at least somewhat more “comfortable” to hold than my Pro 8 specifically in portrait mode. But I don’t preclude that possibility that my discomfort with the aspect ratio may mitigate with more use.

As we have learned , and continue to be reminded with our own custom devices, “what works” is often highly subjective as well as personal.