My boss and I got to see and play with one of these last week though we couldn’t do any testing.

So first off they did nail the look, feature list and the overall build quality that longtime PC users used to associate with Thinkpads.

Spec wise it’s competent but not really exceptional in any way I can see.

So my thought is here is the same stuff that Apple has tried a couple of times, to make this a thing, only to end up clearing them out for less than half the price they are announced at.

I think that the public though, just doesn’t see the value/appeal of “special edition” PC tech.

And the key thing that’s missing is that unlike a watch, or a piece of clothing or furniture, the problem is that tech loses real tangible value from the moment you buy it and quickly comparatively speaking becomes close to useless, compared to something like a watch which will always do its functions (tell the time, etc.) just as well brand new, as when it’s 20 years old.

But maybe I’m just jaded/cynical when it comes to computer tech?

And BTW I think something like a classic iPod which is recently rapidly appreciating in value has a different value proposition based on scarcity, and/or some nostalgia.

I posted awhile back that I found an original iPod Mini in excellent condition in my in-laws house. And while it was fun and nostalgic to get it running and loaded with new music, in reality it was clunkier to use and didn’t sound as good as my iPhone.

The 30th Anniversary X1 is a sheep in wolf’s clothing. Way overpriced. The last Thinkpad that I truly loved was my X301. There may still be no laptop keyboard made that surpasses it.

The 30th Anniversary X1 is a sheep in wolf’s clothing.

But maybe I’m just jaded/cynical when it comes to computer tech?

FWIW - the irony is not lost on me that (1) M$ has made it a habit in recent cycles to use aging chipsets and dragged its feet on port upgrades; and (2) the Amazon Fire tablets are even more decrepit internal specs on Android tablets than Lenovo.

Yeah but Amazon first off positions them as cheap but useful devices and you can often find them on sale for a substantial discount. Plus Amazon actually does a much better than average job of supporting them especially compared to lenovo who is inconsistent in the best case.

Would I be happy with one? No but OTOH as something for my mother-in-law to read her kindle books on and take into the kitchen to watch a you tube how to. it’s great.

And an underappreciated thing is that all the fire tablets are fairly durable, certainly more so than any Apple or Samsung tablet (except for the occasional rugged specific model) 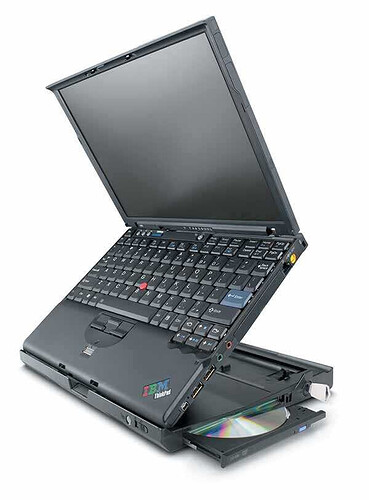 Absolutely. The IBM era ThinkPads were amazing hardware in the day. I owned a couple along the way. I was surprised how much I liked the red button mouse solution - once I got used to it, I never felt the need to carry a separate mouse.

I was surprised how much I liked the red button mouse solution - once I got used to it, I never felt the need to carry a separate mouse.

It’s funny, I still use the trackpoint on occasion. I love the Lenovo compact keyboards (USB and bluetooth alike), and whenever my wireless mouse runs out of battery it’s great that I have trackpoint as a fallback.

BTW I sold my ole X61t, but I still have an X220t and I still love that keyboard. Personally as a nerd I also really loved seeing all the indicator lights. “Hard disk” activity, bluetooth connectivity, wifi status, the works. I’m still kind of a fan of IBM and Lenovo tech, but less so since the X1 Yoga 3rd gen with its weird creaking hinge and terrible paint peeling issues (as well as horrible shipping and billing issues).

I can’t completely rule out another X1 Yoga in my future, but I’m pretty pleased with my SLS, and I’m happy I don’t have to flip it inside out to use it in tablet mode. This message brought to you from an SLS on a seat back tray.

And an underappreciated thing is that all the fire tablets are fairly durable, certainly more so than any Apple or Samsung tablet (except for the occasional rugged specific model)

Absolutely. During my freelance years I supplemented my income four different times working the Christmas rush season at Amazon Fulfillment centers. Mostly ICQA and the associated Amnesty Department. It was in the latter that they had a whole bunch of Kindle Fire tablets in protective cases (Otterbox?) with hand straps and those things were used and abused incredibly and still kept working. They functioned as quickly and as well as they needed to during the three 8-hour shifts, one shift after the other, 24/7 except for the time on chargers. The ones I used probably needed new batteries, however, since sometimes I would have to put them on the charger during lunch break.

Anyway, definitely underrated for what they are designed for.

Ohh, I wanted that one soo badly. But they never released it with a Swedish keyboard.

Over 2 grands for this spec is definitely overpriced. And it doesn’t look all that special when you carry it around…

On the other hand, Lenovo has sections with good value. My Lenovo Gaming 3 was 750$ with a Ryzen 5, dGPU, 8GBRAM + 1 Empty slot, 1 512 GB SSD + 1 empty m2 slot. It was great value. Battery life is less than desired but I doubt an Intel i7 in that Thinkpad would fare much better.

And while I didn’t own one, I find Lenovo tablets quite affordable with good value. Over here, the Tab P11 had been in the 200$ price range with a Snapdragon mid range chip and 6GB RAM. It also had pen support. If it weren’t for the Tab S6 lite ( which is actually ~100$ more expensive where I live), it would have been the best budget penabled Android tablet around.

@lisaMobileTechReview has her review up for this.

Unless batteries can be had for such devices for years to come, then such devices have no chance of becoming classics.

This only happens in three ways:

Take the iPod for example. It was extremely popular. It also helps that the micro-harddrive just happens to be swappable with a CompactFlash card.

They’re so cheap that I actually bought seven of them for use in the classroom.

Durability wasn’t an issue at all. The camera was terrible, and if you lined them up the displays had different temperatures (one was quite yellow), but they did the job as dictionaries, gamepads (think Kahoot), etc.

They were a bit slow, but this was several years ago so newer ones are probably better.