In the recent Windows Central report on Apple iPad patents, one was for connecting two iPads together with a hinge and (optional?) keyboard similar to Microsoft’s (defunct?) Surface Neo.

In a new patent awarded to Apple, the company continues its march to remaking Microsoft’s Surface Book and Surface Pro PCs, an idea once mocked by Apple’s CEO in 2012. 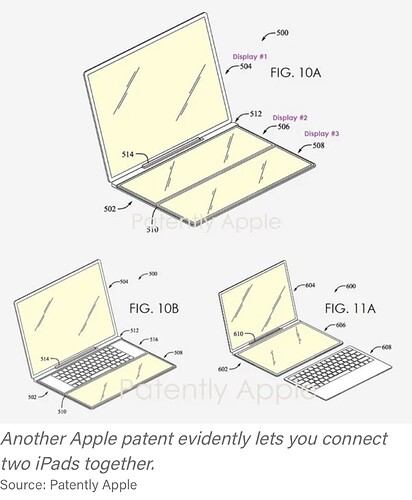 Oops - forgot to add another $300 for 5gb on one, specially shielded for two iPad life…

In all seriousness, this diagram looks more like a direct ripoff of a much more slender Bridge keyboard:

Now what if THIS is the upcoming M2 MacBook Air - made with the M2 12.9" iPad Pro miniLED…look close at the middle of the attachment point for a modified pogo pin connector…

That hinge looks like ones Fujitsu use and Toshiba used. Think they might want paying if they go with that.

WHAT - Apple isn’t copying, they are reinventing, don’t you get it?

But Fujitsu’s or Toshiba’s designs were never magical

Guys! Look on the bright side! At least it would mean an approval of the Neo form factor by Apple, and we know how much MS likes to follow their fruity role models. I say bring on the Neo 2.0.

I just finished watching a video that went deeper into that patent application. There are suggestions that once connected to the keyboard iPad user interface switches to a desktop like.

If only that were possible now…