So aside from the fact that the Verge writer doesn’t know what she’s talking about as “zoom” has always been accomplished in multiple ways going far back in to film cameras.

However what’s significant here is that Sony’s mirrorless tech which is generally outstanding IMHO is moving in a real way to their Smartphone.

Yes’ it’s expensive on the surface, but for what all it actually does, it’s kind of a bargain.

Yes’ it’s expensive on the surface, but for what all it actually does, it’s kind of a bargain.

Yeah, when it’s getting to the point of being able to replace* traditional camera equipment it can be seen as a steal. Kind of like how one can justify the high price of a Galaxy Fold because it can replace* both a smartphone and a tablet (e.g. iPad mini).

It has a Zeiss lens!

That is very tempting. I loved my Nokia with the Zeiss lens. I have always loved Leica cameras because of their Zeiss lenses. And, I do use my camera a lot.

On the other hand, I would greatly miss my S-Pen.

Yes that Zeiss optic caught my eye as well going all the way back to my film days when I inherited my grandfathers vintage Contax camera and it’s three Zeiss lenses. Truly beautiful hardware, that produced outstanding images, albeit with a steep learning curve

In regards to traditional camera replacement, one thing I thought I had sacrificed when going all-iPhone for my photography was long exposures, such as causing a waterfall to blur. Curious to see if a third party camera app would do it, my ‘net search brought up an easy method with the default app using Live Photo: 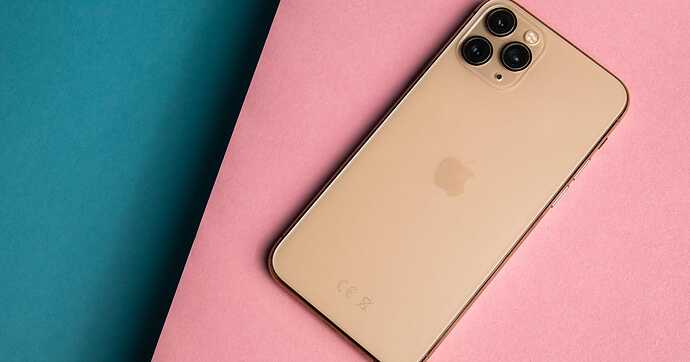 The iPhone 13 Pro takes beautiful shots, but any iPhone (after the iPhone 6) can do this.

I immediately walked out to the creek and tried it:

It works! There doesn’t seem to be a way to adjust the duration of the computational long exposure but beggars can’t be choosers I guess. One small step closer to satisfying my photography itch.

P.S. That was hand held, no tripod or any bracing. Shot like any snapshot. An advantage over traditional shooting.

The price is almost the same as a Fold. For that money I guess I woukd wait for Fold 4. But I can see the appeal for a YouTuber.

@Dellaster Ted. you got me curious enough to try the app myself. EDIT: corrected an incorrect statement that Dellaster caught below

My speculation is that the reason you can’t adjust the “exposure time” is that it’s not the way the capture actually works. Instead what is does is take about 10-15 frames and then “average” them together.

Analogous to the way HDR is captured, but instead of averaging and expanding dynamic range it interpolates pixel shift between frames in to a simulacrum of motion blurring.

In other words, it works great for things like moving water, but does weird things with fixed images/subjects. Very cool regardless and I’ve added it to my iPhone took kit.

Ted. you got me curious enough to download and try the app myself.

What download? I used the default iPhone camera app.

Sorry mistyped that. Somehow “haul out my phone” got scrambled in my brain to download and try out…

I guess it’s akin to my notorious tendency to typos ?

Instead what is does is take about 10-15 frames and then “average” them together.

That’s what I figured, but hoped that one could adjust how many shots were blended together thus simulating different exposure durations.

So my S22 Ultra appears to be able to pull off a similar trick as I tried it just now (though not nearly as well). It appears to employ the same basic strategy as the iPhone but it does offer some small range of adjustment, almost certainly increasing or decreasing the number of frames captured.

I need to look at it more, but the Pro Raw Samsung camera app looks to offer even more tweaking of it.

So am I reading this correctly - a short range true optical zoom without periscope light loss? I was hoping the rumored iPhone 15 (next year) would be a low light loss periscope from 2x-10x from what I’ve been reading.

FYI Verge writer is a woman & she use to work for DPreview. I remember cause her review of the Panasonic GM1 is what sold me on eventually getting that camera.

As for the phone I wish sony went with a 27mm for the standard lens as 24mm is to wide for day to day & they used a 1/3" sensor vs 1/2". Also would have been nice if the UW was 1/2" like many of the competition now offers. I’d be fine with a slightly thicker device if it means better images in less than optimal lighting conditions.

So thanks to a cancelled meeting and my own curiosity on the subject a couple of additional observations on the side detour we have taken. One is that there appears to be a sweet spot to how well this works somewhere at the limits of the water being 30% to 70% of the overall image. Above that the effect disappears and below that it is hit and miss.

Additionally it only seems to work with actual water. I tried it with sand and only got very sharp stopped motion.

Both of those results tell me this is very much a computational photography outcome.

BTW’ Weird forum effect. Apparently you can’t put “it’s” and “hits” right next to each other or it triggers the profanity filter

I wish Sony would go over and knock on the door of Wacom’s offices. Everything else about their phones is very tempting (well, the automatic photo settings leave a lot to be desired, ironically).

They did flirt with a stylus for the Z Ultra, well, being able to use a graphite pencil.

Not only that, given the affinity between image editing and pens, you’d think it would be a slam dunk.

That being said, based on our own experience licensing Wacom tech is not a trivial expense.

Yeah, but the price of all the Sony phones bar the 5 are non-trivially expensive as it is. And Sony are massive, so could easily push Wacom around if they encountered any resistance.

And others have used EMR. The Linfiny DPT (Sony branch out) and Fujitsu Quaderno that were the Sony DPT use EMR for their second gen devices.

So I think Sony just aren’t interested in it. Considering the utter mess their mobile devices division was in, that can be forgiven.