So with the caveat that I have complained about this writer before, once again I think PC Mag fails in a major way to consider who is buying these and why.

I agree that if you are only buying it as a TV it’s significantly overpriced. However, we’ve seen a lot of these and even tested/certified the previous model, in use in corporate training and board rooms.

And the reasons are two, one is that they are very nice looking compared to most TVs which to my mind still often err on the side of “high tech” versus unobtrusive.

Second is that unlike almost every other one we’ve looked at, save for a couple of ultra high end LG and Sony OLED models is also excellent as a PC display. Something that is not true with the majority of “televisions” on the market. There are various cost cutting and feature versus performance trade offs involved (such as sub pixel configuration).

TLDR a company looking for a nice looking and functional display for a corporate training/meeting room is well served by one of these.
Samsung 55-Inch Class The Frame QLED TV Review | PCMag

TLDR a company looking for a nice looking and functional display for a corporate training/meeting room is well served by one of these.

Although I think that the LG OLED is the best of the lot in this class, the Samsung QLED is a decent TV.

An OLED is not best for this use case, unless you like burn-in.

Didnt know that burn in was a TV issue. Thought it affected computer screens when an image stayed on-screen for a long time. The LG OLED display is far more dynamic than the Samsung QLED but Best Buy has great prices on the Samsungs. We have a 65" Samsung in our living room that has been flawless for a year. 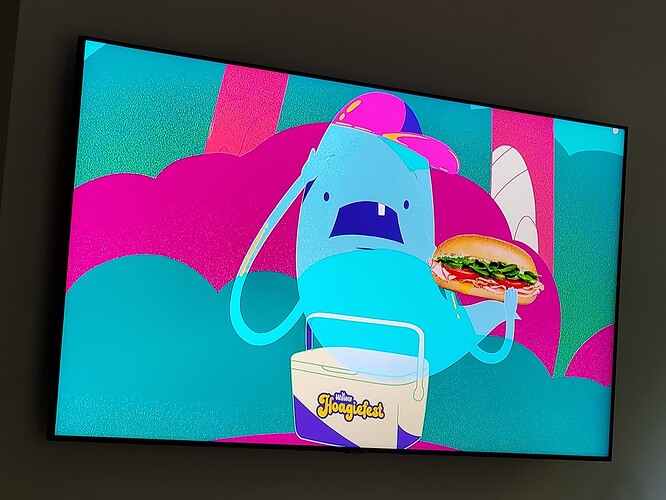 Edit: And, yes, if you’re from the area it’s Hoagiefest time at WaWa.

With the last couple of generations of OLED from anybody, burn in is no longer an issue. E.g. On the LGG2 OLED TV, LG’S flagship, LG has told us that it would take displaying a static high contrast image for at least 12,000 hours continuously (well over a year) before even the possibility of permanent burn in would occur. And that’s the danger zone for conventional LCDs as well

OTOH, it would take considerably less than that to cause temporary image retention (in the neighborhood of 400 hours). But that will clear on it’s own by “resting” eg, turning it off for 8 hours or so.

And FWIW, Samsung’s variant of OLED, AMOLED is at least in theory anyway is even more resistant because of the core material used.

A long way from plasma days where you could do it in a day if you weren’t careful.

Yes, but The Frame TVs are aimed at people wanting to show art.

Yes, you can have them change images, but aesthetically that can make design challenging. And these devices are largely about aesthetics. Quite a few buyers of these may also not want to use them as slideshows (perhaps because it can be distracting) and just want the option to change image occassionally.