This is an interesting device, that I’m not sure who it’s for. We actually are testing one for a specific customer, though even they aren’t intending to widely deploy them.

We haven’t completed testing yet, but so far I concur with this Verge article that as a monitor it’s mediocre. While it’s reasonably color accurate it’s black levels are poor as well as terrible linearity. And most egregiously for me, it’s virtually impossible to keep anywhere even remotely close to calibrated as virtually all aspects of the picture vary significantly simply with something as basic as raising or lowering the backlight,

And I get the appeal (maybe) of the idea that it can double in some cases as a smart tv, but OTOH given the price point, that’s pretty tenuous justification. And obviously if the primary purpose is as computer monitor, then the smart apps are redundant. I mean why wouldn’t you just launch Netflix on the connected computer or tablet.

It does have a few things that I think are the future of consumer displays. First of which is USBC video, basic USB hub functionality and power delivery. So if you have a modern device that charges via USBC, this is a one cable and done solution.

It also has (adequate) built in speakers which if you just want/need basic sound capabilities, it’s a way to reduce desk device clutter. My wife for one is all in for less “stuff” on her desk.

Last and possibly least (at least IMHO) it definitely has the iMac look and vibe and it does have a quality fit and feel.

So, TLDR not for me, especially considering that for the same price or less you can get a far superior 4K display, including from Samsung themselves, but is anyone here interested in this? 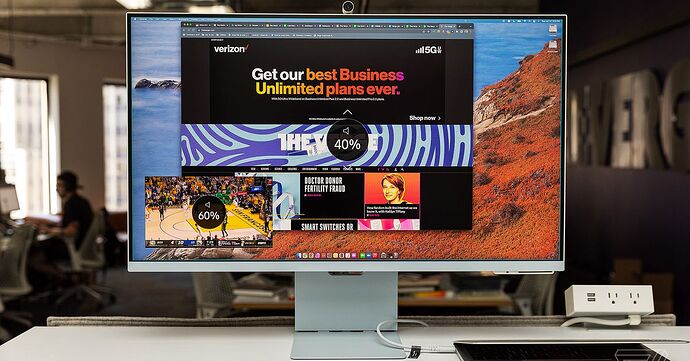 Uniquely feature-packed, to a fault