Robo & Kala is the Surface Pro we wish Microsoft would make

Robo & Kala is a company that you've undoubtedly never heard of, but it had a Surface killer to show off at CES.

The name is worse than even Dough’s, but I’d say their probably more likely to deliver if only because it’s not through some middleman. The Kickstater is very generic.

The only USP for is the keyboard also being Bluetooth capable, ala the Vaio Canvas and HP Z Book x2.

No mention of what the pen tech is, just that it has 4096 levels of pressure.

No mention of what the pen tech is, just that it has 4096 levels of pressure.

The fact that the note “capacitive” and a need for charging (1 min. of charging gets 2 hrs. of usage) makes me think Wacom AES.

Looks freaking cool. Too bad i just upgraded my pro.

I don’t get it - other than weight and OLED, how is this a Surface killer?

Everything has to a ‘-killer’ these days.

I swear, you could get ChatGPT to be more original.

Anyway, the only real differences are the keyboard having Bluetooth and OLED. Well, and the more Apple-esque aesthetic.

Not a Pro killer at all. Setting aside warranty issues and service (which weigh heavily on the side of MS), the lack of a charging cradle in the keyboard is just the first issue that jumped out at me.

Would like to see MS go OLED but not at the expense of the integrated system features, like internal pixelsense controller, that Microsoft has developed over its iterations of design. Plus, the pricing appears that it will be no panacea either.

Good to see some 3d party work being done on WOA. How about some focus on the 10" market? Given MS’ ababdonment of the Go, the market is wide open. Or better yet, how about some vision from MS on that sized device?

The Surface has been the only game in town for so long, there are no killers. No one calls anything an “iPad killer” because the iPad sits alone - Surface Pro is the same. My wife and I were discussing this yesterday - that new Yoga 9i is not a “killer” either. I think we are at a bit of a plateau on handheld tech for a while.

Setting aside the (de)merits of the x-killer terminology and whether or not any of these uses of the term have any justification, that claim is of course too strong, a quick search brings up a whole bunch of “ipad killers”

I agree the terminology is mostly unnecessary hyperbole, but the impression of the complete inevitability of the iPad is probably again an effect of the “US island” - over here in Germany people do use Android (as well). But you’re right that probably none of the competitors qualifies as an actual “killer” in the intended sense either.

Probably also depends on what a “killer” is. I think of something that destroys one manufacturer’s stranglehold on the market.

Do i prefer my s8+ to my old iPad. Absolutely. Did it kill Apples stranglehold on the tablet market. No, so i dont consider it a killer.

I’d buy one in a heartbeat to replace my Galaxy Book 12.

I’m still considering getting one and rooting it to run Linux, and if my life simplifies enough that I can just use Android apps, it’s my fall-back plan if a Wacom One or Cintiq for my MacBook doesn’t work out.

Probably also depends on what a “killer” is. I think of something that destroys one manufacturer’s stranglehold on the market.

Like it or not, iPad does hold a death grip on the tablet market. When was the last time any major software release came out on Android before iPad? How often does your bank have an Android access app before iPadOS? I know this is a parochial view from this side of the pond (well, this side of BOTH ponds) but the US is the largest tablet market and Timmy has a death grip on it for now.

… one manufacturer’s stranglehold on the market.

Also depends on what qualifies as a “stranglehold”. Apple sells twice as many tablets worldwide as Samsung. But they only have one third of the worldwide tablet market. Two-thirds is Android, give or take. Which is the “stranglehold”? Apple or Google? It can be argued either way, I guess, depending on one’s perspective. 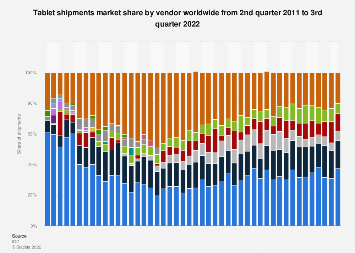 Based on global shipments, Apple was the leading media tablet vendor between 2011 and 2022.

Personally I don’t think either has a stranglehold.

When you consider all the hundreds of “open source” Android tablets out there, ranging from the $50 Onn tablet (Wal-mart store brand) up to the 899 Galaxy S8 Ultra, for one product line to hold 1/3 of the market share at a premium price, no less - I think it’s a stranglehold

for one product line to hold 1/3 of the market share at a premium price, no less - I think it’s a stranglehold

This. Almost the same goes for smartphones and computers - Apple isn’t the number one vendor, but far and away the number one in profitability in each of those market segments, which gives you a lot of room to roam across the technology front.