Surprised nobody mentioned this yet, but there’s an absolute steal of a deal going on for Escape Motions art software:

Everything is $10, including their premiere app, Rebelle 5 Pro. The 5th iteration is a milestone for the natural pigment mixing and NanoPixel canvas features, which are unique among painting apps.

Aaron Rutten gives a good overview of these: Honestly, one of the best deals I’ve ever seen for perpetual license art apps, especially in the recent wave of subscription conversions.

Wow, that’s such a steal, thank you for mentioning it! My Rebelle 3 was bought in a Humble Bundle for 15$, but the only thing I actually use in the Bundle was Rebelle.

The downside though, is my low power portable Windows tablet was utterly defeated by Rebelle 3. Let’s see if Rebelle 5 fare any better (of course the best course of action is using my beefy laptop but I would like to temp fate )

Internal server error right after purchasing. Was there too many people flocking in to take advantage of the deal?

Edit: Rebelle 5 was actually a lot better optimized and my Dual core Celeron Tablet was able to run and paint on it without much lag (as long as I don’t go overboard on brush size). The tablet get hot while running Rebelle which is expected, but it’s fully usable for drawing.

Also, be sure to get the Pro version as it had all of the new features that matter ( cmyk mixing and pixel sense)

There actually another HumbleBundle deal going on for Painter 2022 (not the latest 2023): 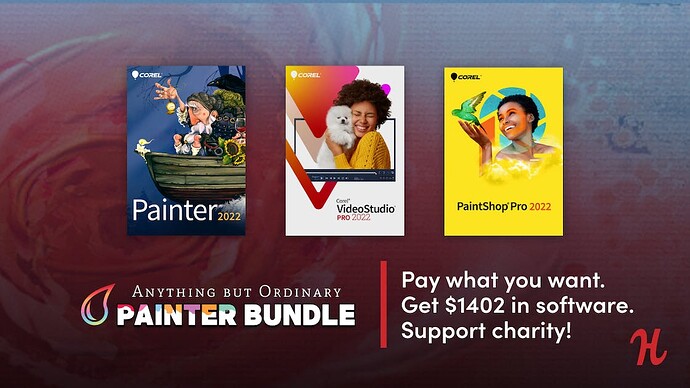 Anything but Ordinary Painter Bundle

We’ve teamed up with Corel for our newest bundle. Get software like Corel Painter 2022, Brush Packs, and VideoStudio Pro 2022. Plus, pay what you want & support charity!

Though it’s ‘expensive’ when compared to this sale, at ~$30 haha.

In reality both great deals, but I think I’m going with Rebelle for my natural media painting this year. Though Painter still has slightly more realistic brush behaviour (but heavier on resources).

I bought a humble bundle from them in 2021 and got a bunch of other photographs and photo edditing software from them.

Main purpose was getting paint shop as a photoshop alternative and try out Painter. Didn’t extensively use them because I was lazy to learn new interface and painter was much more heavy on the pc and interface was clunky.

Rebelle feel much easier to use imo.