Race is on: WOA on Surface Duo?

O yeah! Neo used to be a thing. We wished on the stars. How we fantasized about it and the things we would do with it. Those were the good old days and then the pandemic struck.
What became of it though?

will keep an eye on this topic.

The installation is not yet functional enough for me to want a Duo but as it improves, it’s going to be hard to resist.

Well folks, the experiment took a big leap according to WindowsCentral.

I’m temped. Got my Duo2 as my main phone, this could be a good way to bring some life back into my Duo1. I think I’ll wait till its more stable.

Well speaking for me, according to Windows Central, touch isn’t working. That seems to be deal breaker to me anyway.

BTW: If MS and Qualcomm were to part ways or at least diverge on WOA in the future (and this seems more and more likely) I expect Qualcomm to move to shut this down, using among other tools, one we have talked about in other threads, DMCA

Well now touch is working, but still needs to be improved: This is SO IMPRESSIVE…

If a “civilian” can accomplish so much, what the H*** is Microsoft doing NOT implementing this.

More progress on Win11 for the Duo OG. 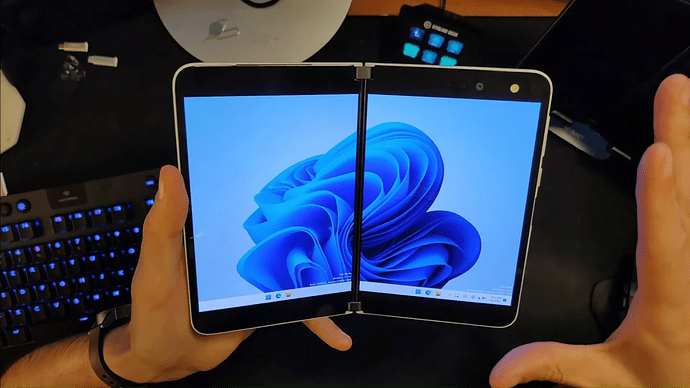 An independent developer continues his crusade to get Windows 11 to run on Surface Duo.

Once they get this working 100%, I will likely not be able to resist.

I’d love to try this (if I had a Duo), but I always have this sneaking suspicion that I am installing something that has a backdoor preinstalled. The guy doing this seems to mean well, so perhaps it’s not likely, but I always worry. Very cool project though.

Another project centered around getting Windows 11 onto devices it wasn’t meant for made the news this week. The Windows 11 on Surface Duo project took a major leap forward by adding support for Wi-Fi, cellular data, GPS, and more. The original Surface Duo can even work with an eSIM following the update to the project.

While it is still an unofficial project that probably won’t ever be aimed at general users, the Surface Duo is now much more useful when running Windows 11.

the Surface Duo is now much more useful when running Windows 11.

You know, a full WOA powered Duo is one of the few gadgets that still get the geek in me excited. It wouldn’t replace my iPhone, but it would be so gosh darned cool!