I suspect that will give a boost to further pen adoption in smaller tablets generally.

Interesting. In October of 2021, reMarkable announced that many of its existing features would be moved to a paid $7.99/mo. subscription model, drawing howls from the user base. Then reMarkable grandfathered current owners to the existing features, and limiting the feature set new buyers could have without the paid subscription. Many existing users gave away/sold their device, and reMarkable saw a huge cancellation of orders, blistering reviews, etc.

Last week reMarkable announced ALL owners would get the original features, and a new “ecosystem” that would allow editing of Remarkable notes on PC/iOS IF the user subscribed to the NEW features at $2.99/mo.
reMarkable announces major expansion of software ecosystem and changes to subscription service

Makes me wonder the extent to which reMarkable’s change of heart (timing) was driven by the coming Kindle?

I like that is Wacom based, but that price is starting to get up there, when Boox has a color e-ink model for a little more. BOOX Nova Air C | 7.8'' Advanced Color eReader with Kaleido Plus On-Cell – BOOX Shop

Exciting development! I was never happy with my Boox device (until the screen cracked basically spontaneously, ending the experiment). I never quite trusted that the device was safe from snooping and hacking. With the Kindle Scribe at least you are certain that Amazon is snooping. 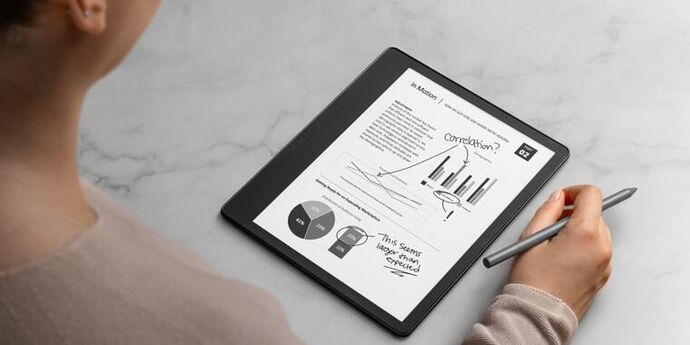 Amazon’s $340 Kindle Scribe is its first e-reader with handwriting and pen...

It will also be Amazon's largest Kindle e-reader, with a 10.2-inch display.

why oh why MS did you abandon Wacom…

Because as with all things Microsoft, (and this is why they bought N-Trig) we want you to use our own amazing, proprietary pen technology!

Ordered one for our lab. Bit of a long wait though with November 30 as the release date.

I’ll likely pass along my Kobo Elipsa to one of my engineers if this is up to snuff, as all of my eBooks are in Kindle format

BTW: I’m somewhat interested in the new Halo Rise, but boy is it ugly IMHO. Though to be fair, part of the look may be required due to the way the sensors work.

A long wait, but looks promising, so I had to get one — just put in my pre-order.

I went for a preorder for a premium pen 32GB on the 5-month no interest offer. Plenty of time to read reviews and reconsider before November 30, so why not? If I wait until I know I want it the wait will be well into next year.

I probably will cancel since my iPad Pro 11 fills that niche quite nicely. But we’ll see. My library is entirely Kindle, so it would be a nice, though expensive, upgrade for my Paperwhite. Wacom EMR is a good bonus as is 300 dpi on a 10.2” front-lit e-ink device (a first).

I probably will cancel since my iPad Pro 11 fills that niche quite nicely.

I love the speed of the iPP11 but I really don’t like the Apple Pencil feel, it is just so gosh darned tappy! I suspect the Scribe will feel better, but I’ll wait until the reviews (including yours?) are out.

The synergy of having Wacom EMR on

is probably going to push me over to getting a Wacom One for use w/ my MacBook Pro — I just wish that there was a version of that which had touch.

Yeah the big question for me is not the hardware, but the software.

The Elipsa, I’m currently using seems to have decent hardware (though it is a bit slow on occasion) but where I’m frequently let down is the software. Either a feature I need is missing entirely or if it’s there is implemented clumsily or overly fussy to use.

One of our customers has actually seen one and he’s not prone to hyperbole, but he called it a “game changer” compared to its handful of semi competitors

Other things I wonder at:

I only know the answer to the first question which that it’s Android based, albeit Amazons extremely forked version that they use in their Fire tablets.

What I don’t know as of yet, though I’ve asked is if they have locked down the UI in a way that won’t allow sideloading of apps like they do with the current e-ink Kindles

I have a Galaxy Flex 2 laptop (Wacom) with a matte SP and a Remarkable tablet (Wacom), and I use a HP zbook x2 pen with a felt nib on both. Love it. The Flex 2 is not without compromises, but this element of the work situation is great. Wonderful to do zoom meetings, do design work live on my laptop with a shared screen, and make notes in my notebook at the same time, off on the side. I used to have to switch pens, and that was a real pain.

If I could break away from my iPhone, it would be very cool to use the same pen with my phone. For sure, it’s great when occasionally I don’t have my pen nearby, and I can use the silo’d pen in the laptop on both devices. Rare, but a real work situation.

I admit, this device (the scribe) does sound cool. I don’t use Kindle, but in the Rm community e-reading is big, and lack of Kindle books is a common complaint. This is smart of Amazon. It’ll sell. The real question for me is if there will be any notation functionality outside of writing on e-books, and if so, what it will be like. The Rm is definitely still a notebook without distractions first and foremost, and it does that really really well. Friction feels good on screen, “pen” options look good onscreen, has templates and layers, ways to send pages out, etc. It’s got limitations, but I like it. Sometimes I like it because of the limitations.

For folks who want an e-reader with the Kindle app, pen input (Wacom tech of some sort, I think?), but also a calendar that syncs with google, etc., you might want to look at the Supernote Ratta A5x or the Note Boox. Both are built on Android and allow you to load apps. The issue is a lot of apps still don’t really work well with e-ink. Although this may be something that Amazon could push through into development.!!

One of the reasons I despair of replacing my GB12 is the high-resolution screen — that the Kindle Scribe has an even higher pixel density is a big draw for me.

Probably, if Apple would just make a Mac which could use an Apple Pencil, I’d jump ship — as it is, I’m seriously considering either a Wacom One (but it’s low-resolution) or a Cintiq Pro (but it’s a different pen technology) for my MacBook.

I seriously considered getting a Remarkable Tablet for a long while (probably if I’d known about the calligraphy nib I’d’ve bought one) — we’ll have to see what Amazon actually ships (hoping for software upgrades, esp. in terms of Kindle App support on the Mac).

Voja’s take on the announcement:

Spoiler: He’s encouraged by what he sees but disappointed that preorders are apparently US (or NA? Can Canadians preorder?) only.

One issue which I’m a bit concerned about which isn’t being discussed much is the lack of pressure-sensitivity specs on the stylus — Wacom has done binary on/off styluses in the past (had one on my NCR-3125) and when using it at my desk I had to be careful if using my Wacom ArtZ, to switch from the pressure-input stylus to the signature stylus if I wanted to interact w/ the screen on the NCR-3125.

I’m hoping that the Premium Pen is pressure-sensitive, and that the 64GB unit has a different digitizer than the units w/ less storage, but if not, I’ll have to cope.

The big thing is, that’s the only hardware issue I’m seeing — everything else is software and should improve for as long as Amazon is willing to update the device — the big questions are how many updates this unit will get, how much 3rd party access there will be, and when the second-generation will ship (if it will ship).

Good question, @WillAdams — the sticky notes do not appear to have line thickness variation in the pictured writing:

I also see no evidence of line thickness variation from pressure in any of the other photos. So it might be that calligraphy, etc., is not going to be a thing on the Scribe.

Then again, the animated photo shows them choosing (ballpoint?) pen and there’s what looks like a fountain pen choice below that, which makes no sense without pressure sensitivity & line thickness variation.