Next Iphones only to have latest and fastest chips in top end models?

This is interesting if true and would be a change more generally in the iPhone line. It’s something that Samsung has done for years with their lines as they have used various downline though current Snapdragons in the lower end lines.

I’m a bit skeptical of this, with the caveat that it may be the downstream effects of the ongoing chip fab issues, and rumors are that as much as anything that may be why the new iPad Air got the M1 instead of a tweaked A15 which would have been more typical.

I’m a bit skeptical of this, with the caveat that it may be the downstream effects of the ongoing chip fab issues, and rumors are that as much as anything that may be why the new iPad Air got the M1 instead of a tweaked A15 which would have been more typical.

Just saw this quote on The Verge about a new Sabrent TB dock, and why they told them it was TB3 and not TB4:

" It’s a shame that Sabrent’s new dock doesn’t support the newer Thunderbolt 4 standard, but the company tells PetaPixel that the global chip shortage made it too difficult to acquire Thunderbolt 4-capable chips. That means it misses out on more advanced features like being able to power an 8K display at 60Hz."

This “chip shortage” issue is starting to look pretty bleak…

Hadn’t seen that one yet but I believe it. And BTW we hear that RAM is going to rocket in price fairly soon as well. Some of the RAM fabs are turning to regular chips allegedly as the profits on a chipset are a lot higher.

PS: Chip shortage is also why only just now with the Studio, Apple went to TB4. All the other M1’s to date including the iPad Pros are TB3

I didn’t know (1) Ukraine was a big producer of neon gas, or that (2) neon is necessary for chip production. Thanks Vlad.

This “chip shortage” issue is starting to look pretty bleak…

I know right? Just today I saw the article below. Incredible how this all went down. 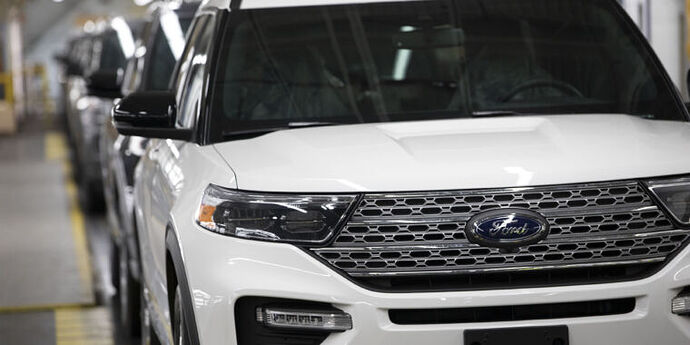 Ford is just the latest automaker to cut features instead of idling factories.

Apple will come up with something to differentiate the 14 from the 13, something around the display or the camera. Tech geeks will complain that the 14 isn’t “really a worthwhile upgrade” and more reasonable folks will point out that the 14 is really targeted at people with phones that are two to five years old. Then in 2023 it will be the new normal.

It is a pretty crazy situation right now. I have a personal friend who is a whiz when it comes to supply chain management that one of the big auto companies just hired to help manage semiconductor purchasing. In speaking with him, the industry’s biggest goal now in navigating this mess is to reverse the decades of foreign dependencies and reach full domestic capable redundancy in semiconductor production by 2030. Of course, that means enduring at least eight more years of this rocky road before then and that’s if they even meet that aggressive goal.

This whole saga is just starting to play out and I think we’ve seen only the beginnings of the long-term impacts. What is not getting enough discussion IMHO, is it’s exposing the limitations of both global supply chains, but also more importantly JIT (just in time) manufacturing.

As @Hifihedgehog references, JIT was one of the transformational ideas in the auto industry. Toyota and then Honda led the way with it and it nearly killed the US auto industry as the model there was often to stockpile the various components needed for a production run, long before it started up. That led initially to “platforms” such as the infamous K-Cars from Chrysler which attempted to use as much of the same components as possible across product lines with idea that scale would also cut costs.

It probably reached its apotheosis (in a bad way ) with the Chevy Citation and the small Cadillac being nearly the same car.

Tech pretty much abandoned the stock plie approach fairly early on, though prior adherence to it was arguably a significant cause of Apple’s near death experience and also one of the major factors in Tim Cooks rise as a master of JIT.

But more and more the PC OEMs especially lower tiers, have relied on “reference” motherboards and chip sets from Intel and AMD…

Apple. at least in theory is better positioned to handle this due to smaller reliance on 3rd parties for key components, though even that approach has limits as they still rely on them for RAM, SSDs and thunderbolt chips (and constrained supply is likely why the Studio is the first Mac to get TB4 despite Apple being a coinventor of Thunderbolt)

TLDR we think at least the medium term impacts of all this will be less total new product releases and longer refresh cycles for existing product lines. As with all things, there will be winners and losers, though the bigger incumbents will likely be the biggest beneficiaries, and smaller or niche companies may get squeezed out, sadly.

Let’s hope one of the long term lessons from the debacle of the last 2 years is a renewed focus on resilience and redundancy as a necessary part of modern business operations.

@Bishop Agreed, though those seem to be antiquated ideas in the minds of many of the millennials I work with and are most definitely ascendant, at least in my industry.

Tech specific and related to the broader topic is the dependence on rare earth elements and the extremely uneven distribution in the world, especially since a large chunk seem to be in countries that, let’s just say are not paragons of either democracy or even political stability.

And just to continue down the rabbit hole this topic has taken, I wonder what the three major game console makers think about all this?

At the moment they seem to be benefiting as they sell all they can make. But…

Since the arrival of the original XBOX, the manufacturers have followed a model of taking losses initially with the idea that component costs will drop over the life of the console and thus become break even or even profitable at some point.

I’m not 100% sure this is totally true, but I’ve heard in multiple places that Sony’s PS2 for example, costs to make it were less than one tenth of what it did during the last two years of its life, compared to the first two. Even Apple has adopted this approach with “brand new” devices such as the iPad and Apple TV.

though those seem to be antiquated ideas in the minds of many of the millennials I work with and are most definitely ascendant, at least in my industry.

Exactly. And that is why each generation must, sometimes painfully, relearn the lesson of the tortoise and the hare.

Since the arrival of the original XBOX, the manufacturers have followed a model of taking losses initially with the idea that component costs will drop over the life of the console and thus become break even or even profitable at some point.

The theory is correct. I admit I don’t know enough about that industrial cycle to speak with authority. From here in the cheap seats, between Apple’s lock on the app store and M$'s Activision move, the ultimate value of hardware seems to be in creating long term recurring revenue streams. GM discovered this with OnStar, and other car companies are trying to emulate. Heaven help us. Cars, the American iconic image of independence, are being reduced to ownership as a service before our very eyes.

So you’ll get the irony of all this, but I’ve also heard multiple of the same millennials talk about employees with a similar approach, JIC, (just in case) aka the rise of gig/contract workers.

What I find ironic is that some of the biggest proponents of this also believe that it won’t apply to them.

Side note, it seems that whoever built Uber and Lyft drivers has run out of chips as well, because it’s been slim pickings! I’ve started taking the (gasp) taxi to head home from the airport.

I’ve started taking the (gasp) taxi to head home from the airport.

If it gets low on supply there, you may be forced to do this to hail the taxi: @Bishop Agreed, though those seem to be antiquated ideas in the minds of many of the millennials I work with and are most definitely ascendant, at least in my industry.

That’s a sad commentary that probably will require tough times to give them a cool splash of reality, and it makes me ashamed of a lot of people in my instant-everything generation who still don’t put stock in good old-fashioned common sense. Then again, there are some of us who don’t ascribe to that reactive-over-proactive mindset including my friend I mentioned earlier who believes in things like cash reserves, supply stockpiles, long-term food storage, and other “antiquated” approaches of that nature.

So maybe it’s a good thing I spent last year buying & dstraussing & trying to get a device mix that felt right? As long as nothing breaks I think I’m good for a couple of years.

Sorry to pile on, but did you all see that the Chinese manufacturing centers have been nearly shut down by a massive COVID outbreak, particularly Shenzhen? There goes Apple shipments for a while…