Besides the fact that I just really like small PCs in general, these systems serve a valuable if perhaps niche segment which is that they are the closest the average person can get to a “reference” Intel system

PS: It’s also one of the vanishingly small number of systems that score 100% on TB and USB spec compliance.

Why 4GB is still a standard for such a system

I’m probably comparing apple and orange, but it is hard to take it seriously after getting a decent spec gaming laptop with a dGPU for the same price as that entry level NUC system.

I mean, great engineering must be needed to get it to be that small, and probably it was built with better quality materials than my laptop, and the connection specifications must be top notch. But to take advantage of all that, it would need to be connected to a dock/ dongle/ eGPU, then display and keyboard/mouse. It would still need to sit on a table all the time, has a mess of cables and dongle connected it, even if you mount it to the back of a screen.

I guess there should still be use case for it, like saving table space and (probably) better performance than laptop processors. But personally I don’t find the pros outweight the cons.

Better to buy a barebones NUC than to go with a value-added system like that. As the article reads, “Simply NUC also tends to charge a premium for the company’s support and expertise with NUC systems.”

Not that Intel NUCs can ever be described as inexpensive.

I used to really like mini PC, but here is a cartoon showing the reason I no longer find them appealing. 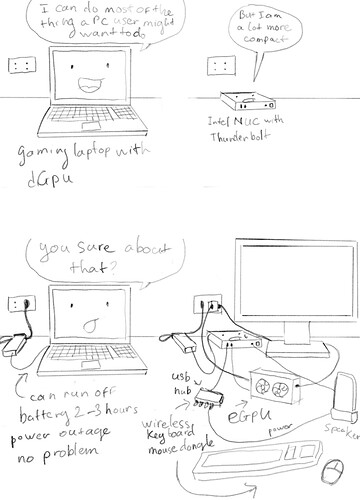 I know that in a wired system, every components can be reused /replaced and last longer, but considering the whole laptop only cost as much as the little NUC…

I used to really like mini PC, but here is a cartoon showing the reason I no longer find them appealing

Couldn’t disagree more. I’m have two of the 8th Gen Hades Canyon NUCs, and even though its alittle old in tooth now graphicly, its built in vega GPU was roughly in the GTX 1060 levels for its time, so for light things you wouldn’t need a eGPU, and the Hades Canyon had a plethora of ports. It had 6 Type-A USB Ports, 1- Type-C, 2 Type-C Thunderbolt, 2 Mini Display Ports, 2 HDMI, 2 Ethernet Ports, and an audio jack and a full size SD card reader. I don’t think theres ever been a device with so many built in ports. But for the Hades Canyon you would seldom need to use a USB Hub. (It was a tragic shame when its successor the NUC 11 stripped so many ports away). And paired with a 4 or 6 monitor display (it can push six 4K at once), to this day it is still somewhat of unmatched bad ■■■ in a PC box.

Of course this is still the low end option. I’ll be far more interested when they have the more powerful model, or rather the successor to the NUC 11 Enthusiast which added a RTX 2060 into the mix. I’d imagine they will likely go with Arc Graphics. Idealy if would be nice if they could create something more along the lines of a Windows equivalent of the Mac Studio, but I think even with 12th gen and Arc that would be a tall order.

I drew that based off the pictures shown in the articles, which seem to bea much smaller class of NUC. The bigger Canyon seem more in line with a compact PC box with at least better connectivity. I’m probably exaggerating, but even without the eGPU, the amount of cables is still not a lot smaller. 4 USB ports might be enough to put in essential hardware ( keyboard, mouse, speaker, graphic tablet) but no room for anything else. And Thunderbolt support is quite pointless if you don’t make use of it.

Again, it could be useful for some people, but certainly not for everyone.

I always find these topics interesting for the diversity of views on this. They always range from “I see absolutely no purpose for this” to "this is perfect for me for x. y. z…

And thus, why I always remind my engineers to keep an open mind on all tech.

So, for me, probably not a surprise, but I have two in my house. On serves as a file server for the whole house as well as plex host, firewall and router.

The other is my experiment machine to try betas of both apps and OS or other operating systems. It’s currently running a distro of Red Hat Linux, which is serving as a test bed for a project we are working on with a customer.

I also use it to test out various docks as it has the aforementioned 100% USB and TB spec compliance. And occasionally an EGPU option though for me anyway, egpus to date seem to be more trouble than they are worth.

And of course again as a reference “known good” to compare against for troubleshooting.

Yeah, for those purposes, the NUC seem to be perfect. As a test/ home server it doesn’t require much peripherals connected, and is low key enough without a lot of powers.

What bother me the most though, is that those devices doesn’t includes the power supply in their marketing materials that could lead to false expectations. I guess the power cable of this one is as big as a laptop brick?

A PC case is big because outside of mainboard, processor, RAM, they also hold the dGPU, up to 4 HDD / SSD for storage, all of that are connected to one PSU powered by a single power cord. The NUC trend seem to just break down the regular PC into smaller components (eGPU, thunderbolt dock, external drives etc), each need their own power supply AND also connected to each other. I would prefer a more compact design for the PC box that can hold everything, has enough ports so external dock isn’t needed, and all of that can be powered from one cable.

Also part of my problem was because my house power outlet system is kind of old without any grounding, and seeing an extension lead plugged full of cables make me really worried.

Has anyone converted these into a NAS? A larger case would be needed to expand and have more drives.