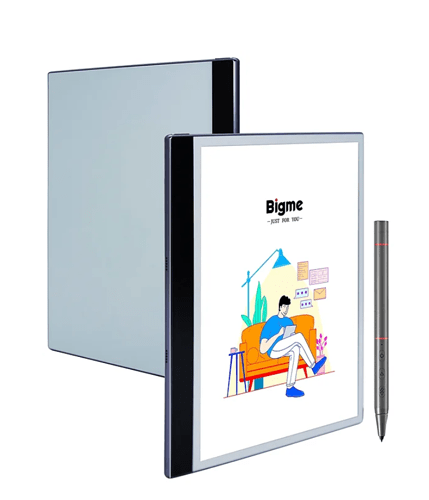 The Bigme Galy features an 8-inch Gallery 3 color e-paper display. It will have 300 PPI color resolution, which is achieved through a four particle ink system: cyan, magenta, yellow and white, which allows a full color gamut at each pixel. There is a... And the price is… hold onto something or sit down… Ready?

I wish Samsung would do something like that. The only reason being that I want to run Samsung Notes on it.

You can? Didn’t know that. But sideloading means I have to get hold of the APK, no automatic upgrades and no syncing, or?

That’s true about manually installing and updating. APKmirror is very good at having the current version available.

Syncing between devices does work, as you use a Samsung account including the Windows version that’s on the MS app store Very positive, and also, very tempting. Will definitely be getting one if the Kindle Scribe doesn’t work out, and a v2 w/ a 300ppi screen is getting close to “must buy, will sleep on couch” status.

I wonder if you need Samsung store installed to have Samsung note running an Sync, like you need Google play service to install your paid app.

I managed to sideload an old version (that no longer available from the store) of an App on my old tablet with ancient Android version. Paid in app purchase on the new version of the app in my new phone, and I was able to activate the purchase with the same gmail account on the old tablet.

You need one additional app. Samsung Account, for syncing. And of course you need a Samsung account as it uses the cloud for syncing and it will sync with the Samsung Notes app in the Windows App store as well as the Android stuff.

Interesting, I didn’t expect Samsung accounts service to be able to be sideloaded, too. Is it the same for Amazon store?

You can get it direct from Amazon.

it will sync with the Samsung Notes app in the Windows App store as well as the Android stuff.

I have to sync it manually on my Surface Go, and I need to initiate it twice before the sync kicks in.

Interesting, we have a bunch of Surface Go’s used with Samsung and a few Motorola phones and we haven’t seen any issues. I wonder what’s different?

Alas, it isn’t every single time, but about 80 % of the time. Could using public Wi-Fi be an explanation?

Yes it could, a lot of public Wifi blocks a lot of syncing related or most stuff that isn’t just HTTP/HTTPS type traffic to reduce congestion.

The Starbucks near our offices , blocks all Windows updates for instance

I’ve been waiting for one of these eink tablets to finally offer a raster based drawing app that wouldn’t bog down overtime like the default vector notetaking apps that come with remarkable, onyx, supernote. I was excited about Onyx Boox and the entire android app market to deliver, but was dissapointed in the performance of Sketchbook and other painting apps on my first device the Note 5. But finally the Tab Ultra delivers with sketchbook and other painting apps working great, even better with ultrafast mode. So yeah this is for any other artists out there waiting to pull the trigger

Now i wish anyone would bother to do a video test of sketchbook / CSP / Krita running one of these eink full Android devices.

Looks like there will be a lot of testing to be done: 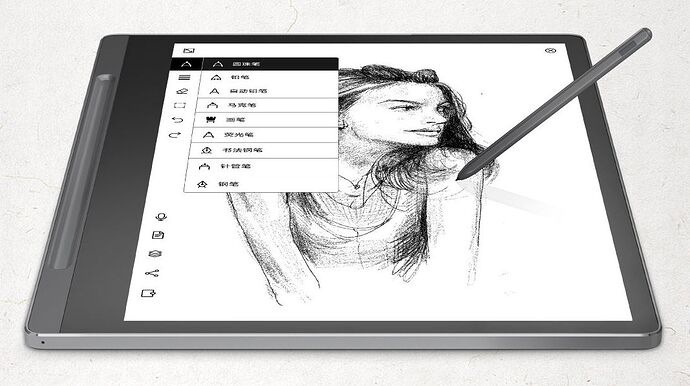 Yup, looks like it. Probably using the same display and such as Boox, et al. Here’s the promotional image with English translation. 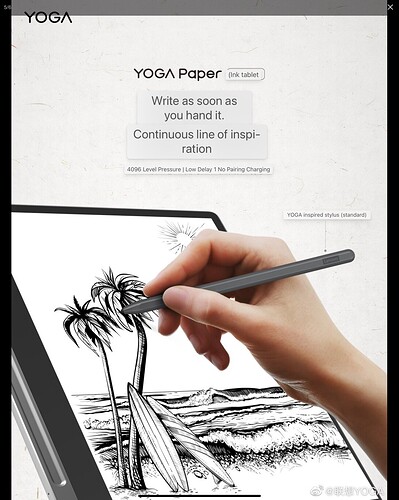 Yeah we’ve heard that they pretty much are the default choice for e-ink, pen enabled devices due to much lower power consumption, lower RFI output (which e-ink is more sensitive to than LCD or OLED) and pen simplicity (no battery)

Checking this morning they also seem to have loosened their licensing structure specifically for e-ink devices and going down to as small as six inches. I haven’t seen any announcement in that size yet, but I have to think there is likely one or more on the way in the sub 10 inch range