Love this quote from Panay:

“Whether it’s two screens or a foldable, I do think these are realities to the future of products being made, no doubt,” says Panay. “Or a rollable for that matter, a rollable screen. It’s maybe not something I’ve decided on, but for sure how do we serve the form factor that’s going to adapt to the person I think is the way to think about it.”

My failure is I keep forgetting he was SMITTEN with the Surface Mini and hasn’t really given up on that play yet. In fact, I just picked up a used unlocked OG Duo 256gb off FleaBay ($289) to play with as a mini-tablet experiment…

BTW: Interim report on my switch to the Pro 9 5G now that I can talk publicly…

First off after doing testing all day yesterday, the only solid conclusion I can come to performance wise with our tests is that I think several need to be updated

as results were all over the place.

OTOH using it for my actual work stuff, heavy use of Office, Teams, Acrobat DC, it feels more or less identical to my Pro 8, with one notable improvement.

I received my Pro 9 5G last night, did the updates, added my accounts, switched to the Beta Channel for M365 Apps for Enterprise and currently loading the Dev Channel Windows 11 Build. So far the performance has been on par with my Pro 8.

That’s pretty encouraging, now if MS would just stick that in the Neo and launch…

And THIS is downright INSULTING MS…

Welcome to the club!

I just can’t bring myself to do ARM yet, too much legacy and weird x86 stuff that I get up to. Although the NPU makes it more compelling this time around.

That’s the biggest drawback that I have with it in spite of the battery life gains. I have an i7 and a SQ3 demo unit on order direct with Microsoft’s main distributor TD Synnex so I can decide which is the best of the lot. 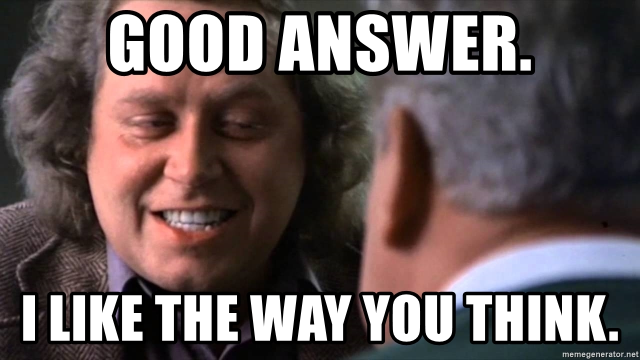 Will you be doing a battery comparison between the SP9 (x86) vs 5G using your formal test bench?

Just going by your numbers, you’re getting between 20-40% efficiency improvement over the Tiger Lake-U. This looks very promising, assuming MS continues to roll out optimizations for WOA, that we could see the mythical +40% over 12th gen (that some doubters here questioned

Yes, but it won’t be in the very near future. Testing this one uncovered some flaws and areas we need to update in our tests before we get meaningful results. (chip and OS changes)

Marty, here is PCWorld’s battery life test that demonstrates the gains in battery life over the Surface Pro 8 and X: 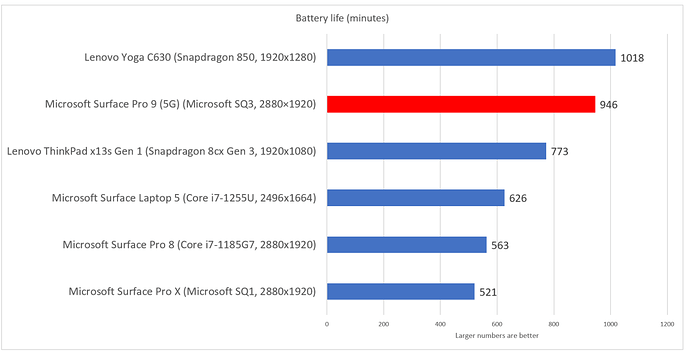 FWIW I’m a bit skeptical of their results for the same reason I am of ours. Preliminarily MS/Qualcomm seem have altered turbo, throttling and caching behavior extrapolating from our test results.

And to give one very specific instance, they seem to have finally gotten video decoding in the same ballpark as the excellent job that Intel Core I 7th gen and on have done. Prior to this, decoding a 4k stream was about three times more CPU intensive with WOA

On a related (but off-topic) note: the early battery life tests of the SLS showed a suspiciously large drop when just watching video, as if video decoding was not properly optimized even on Intel systems. Do you happen to know if any changes have been made in Win11 or the Surface firmware in response to this? Just curious, because I don’t watch enough video on the SLS for it to be a problem.

And FWIW, I realize some are forced to use it, but Slack is a POS as far as i"m concerned,

I mean, that’s exactly the problem though. If you need to use some random app, you need it to work, even if it’s a garbage app. And when all of these outliers come up, it doesn’t matter how great everything else is.

I’ll give them credit though, there’s been more action this week on the ARM front than all year, with Unity announcing support (though notably, they also claimed to support Windows Phone but that was a mess) and the new Dev Box release, and a few other smaller items. Nothing that will make an immediate difference, but hey, maybe eventually (though I’m not holding my breath).

Well, they recently tested the Surface Laptop 5 as well (it’s also in the chart) and its results bear out with the Pro 8: significantly lower battery life. ARM, when properly optimized, have always done better than x86 counterparts since once you have hardware decoding working well, ARM’s lower idle CPU and total package power really shines in that scenario.

It’s a dilemma in that obviously if your company uses Slack, then how it runs on something like the Pro 9 5g is a valid issue. OTOH, because it’s a poor app, making the leap to say that it’s WOA /the Pro 9 5g that is a poor performer isn’t accurate either.

And that is by far my biggest problem with benchmarks, especially the cherry picking that the companies and/or their advocates do to promote their cause

I mentioned the seemingly much improved video decoding that we are seeing with the Pro 9 5G and Windows 11 20H2. So to my point, a battery benchmark that utilizes for example a looping video until the battery dies, is going to show significant improvement, but unless extensive playback of streaming videos is part of your use case, you are unlikely to see the increased battery life that test would show.

So TLDR so far the Pro 9 5g in my normal work use, the Pro 9 5g is roughly equal to my previous I5 Pro 8, but with improved battery life and of course 5g.

I fully intend to pursue changes to our own tests to better quantify the performance and I’ll share what I find here.

And BTW: One example of how tests can get skewed, our initial tests showed slightly better display quality results than the Pro 8. But the reality was that the results from the Pro 8 were based on a prior version of Windows 11, and updating the Pro 8 to 20H2, made them essentially identical. In other words, MS improved the color handling of the OS.

PCWorld’s review of the Pro 9 5G is fairly positive though I do question his judgment when he talks about his great sounding wired Pixel Buds. FWIW the general sense I’ve seen is that the wired Pixel Buds are on par with Apples wired earbuds…

Interesting, thanks for mentioning it here.