And here come the Provantage Surface Pro 9 x86 demo units. These ones are government ones, hilariously enough. Of course, given Windows 11’s track record, they are Windows 10. And given Provantage’s track record (which @JoeS will readily attest, which is what he is recounting above), don’t expect them necessarily fulfilling them. Then again, that was during the pandemic. Fingers crossed they deliver this time. To add insult to injury, I have one preordered, at least.

Get Fast Service and Low Prices on Microsoft Tablets and Over 500,000 Other Products at Provantage.

Finally, I have the elusive SQ3 demo unit preordered at ITsavvy. Using the Microsoft SKU sheet above, I was able to cross-reference and by process of elimination figure out that the SQ3 demo SKU is RXI-00001 on Synnex’s Tech Data catalog. 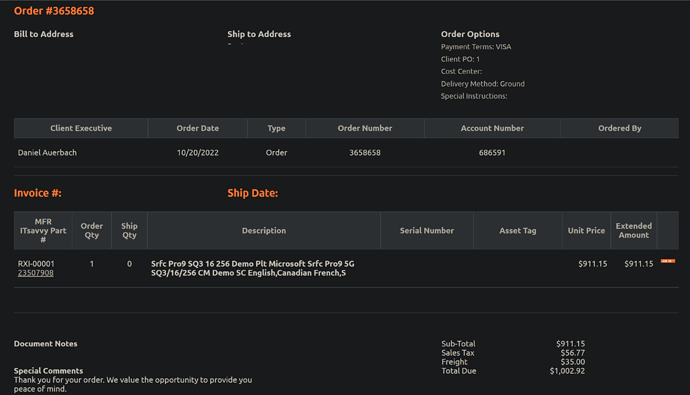 If you also want to give it a shot and try getting an SQ3 demo unit, here you go:

It did take about 7 months before my SLS i7/32GB demo shipped from Provantage.

Appreciate your work @Hifihedgehog on tracking down these demo units!

And how! I think people will really appreciate them especially with insanely high launch prices like these. (Yes, this is real as of the time of this post.) And to think people thought the Surface Hub was expensive, this is like Lamborghini and Gucci had a tech baby. I sure hope this is 24K gold-plated and signed and delivered personally by Panos Panay himself.

This looks interesting. Running the same SQ3 cpu as the SP9 5G. If I can find one eventually for $400 & dual boot Linux on there, I could see this replacing my Intel NUC. Microsoft’s “Project Volterra” becomes an Arm-powered mini PC with 32GB of RAM | Ars Technica

Looks like it sold out by unexpected high demand. The page is dead right now. EDIT: And now it’s back.

Review embargo is over on the Pro 9 and Pro 9 5G. The Verge isn’t happy, but I do wonder if they tested with the updates which were only made available late yesterday.

We will start testing later today, but anecdotally my experience was quite a bit better than his, even without the updates.

And FWIW, I realize some are forced to use it, but Slack is a POS as far as i"m concerned, and Spotify on Windows isn’t far behind.

Appreciate the “Verge” giving it some space but in typical fashion they continue to show media bias that is all too common today. Using apps that are horrible to begin with and then complaining. Typical. They claim to be running like “most people” but that is hardly the case. who uses Spotify on a pc? I am a user for my music for sure but I use it on my phone, not my work machine. I don’t even run it on my ipad. and how many times do we have to say no chrome? use edge, how many? Then to say you are trying to run Lightroom… ok that’s it you lost me completely. Terrible review.

And lets not even start on Stage Manager for iPad. I tried that out on my 2022 iPad Pro 12 and it sucks pretty badly at doing things Microsoft has down pat, like close and minimize windows, full resize and move wherever you want, and don’t get me started on file management. So please Verge don’t even try and compare this to an Apple product. Apple makes toys, this is a productivity device. (and yes I have and use an iPhone, apple watch, and iPad.

Now I am not saying there are not issues here, but please stick with “real” issues and not some made up ■■■■ to justify your love for all things Apple.

And FWIW, I realize some are forced to use it, but Slack is a POS as far as i"m concerned, and Spotify on Windows isn’t far behind.

Someone mentioned in the comments to her there she is probably running the x86 & not the ARM version of Spotify. As for Slack is has been acceptable on my SP7+ performance wise.

I dunno why the Verge only keeps putting lack of a headphone jack as a con on non-Apple devices, but they need to weight that equally across all brands imho.

No headphone jack is a joke… noone has a headphone jack any longer… not even phones. Now for real cons… the price is really high… I hate they added the extra weight and thickness. Love the physical factor of my Pro X but it is what it is. wish they would have stayed the same physically. Now the only things stopping me from upgrading from my rev 1 Pro X is the battery life. If I give up the size, will I get better battery life? Thats all I care about. Apps are fine for me.

And lets not even start on Stage Manager for iPad. I tried that out on my 2022 iPad Pro 12 and it sucks pretty badly at doing things Microsoft has down pat

Agreed, I tried it out yesterday and I’ve been complaining about it (or my lack of understanding…) in the iOS 16.1 thread. So far I find the whole thing… challenging.

TLDR: battery life is more amazing than I initially thought but igpu is decent but not amazing (still big increase over Pro X though). Microsoft Surface Pro 9 (5G) review: An Arm tablet worth buying | PCWorld

Asidre from the price for road warriors this does seems more appealing than the intel Pro 9 (almost a no brainer if mostly using Office stuff).

Nice, that last one is “our own” @Cbutters. Cameron, did you also get your hands on an ARM version? Curious about your impressions on that one.

Just saw that a few minutes ago - hope springs eternal - AND YES, MS got it right with the Surface Pro design, despite ongoing jokes about lapability, the kickstand/keyboard is better than ANY cumbersome Magic Keyboard-like solution.

And I will pose a really hair brain idea - take Apple head on with your own FaceTime/iMessage/News+ alternative that works across Android phone devices as well. Buy Zoom if you have to (Teams is too heavyweight for consumer users) and make the Surface devices (especially a “new” Neo and Duo) the REAL alternative to iPad and MacBook Air…

the kickstand/keyboard is better than ANY cumbersome Magic Keyboard-like solution.

I would agree, with the exception of the first magic keyboard. That thing is great, if heavy. Totally lapable, compact, and easy to take off the iPad for some true tablet work. Only other downside is that you need two hands to pry it open. Love that thing.

Love this quote from Panay:

“Whether it’s two screens or a foldable, I do think these are realities to the future of products being made, no doubt,” says Panay. “Or a rollable for that matter, a rollable screen. It’s maybe not something I’ve decided on, but for sure how do we serve the form factor that’s going to adapt to the person I think is the way to think about it.”

My failure is I keep forgetting he was SMITTEN with the Surface Mini and hasn’t really given up on that play yet. In fact, I just picked up a used unlocked OG Duo 256gb off FleaBay ($289) to play with as a mini-tablet experiment…

BTW: Interim report on my switch to the Pro 9 5G now that I can talk publicly…

First off after doing testing all day yesterday, the only solid conclusion I can come to performance wise with our tests is that I think several need to be updated

as results were all over the place.

OTOH using it for my actual work stuff, heavy use of Office, Teams, Acrobat DC, it feels more or less identical to my Pro 8, with one notable improvement.

I received my Pro 9 5G last night, did the updates, added my accounts, switched to the Beta Channel for M365 Apps for Enterprise and currently loading the Dev Channel Windows 11 Build. So far the performance has been on par with my Pro 8.