So, @Hifihedgehog, have you received the packages from ITSavvy. I’m still waiting for a confirmation email of my last order. I Hope MS doesn’t cancel it again; I’ll be very disappointed. More so since I sold my SGo 3 yesterday in anticipation of this order.
I’m afraid of emailing Matthew again and getting another “canceled” response.

Can confirm. Mine are all en route, with serials generated on the order on Friday, and tracking showing they are set to arrive tomorrow with them only an hour away at a local FedEx hub. By the way, welcome to the forum!

Thanks. It was very insightful of you to create this backup forum. Waiting to see if my order goes thru or gets canceled again.

Quick update for those that are interested in picking up one of the LTE Pro 8s.

We received our lab unit late last week. We didn’t do a complete recertification, but we did test the LTE.

The abridged version of our results is that it’s mid pack in terms of throughput overall, but in the upper tier as far as signal acquisition, about the same as Samsung’s LTE tablets.

One odd result was that it did by far the best overall on AT&T and worst on T-Mobile. A difference cumulatively of around 30%

We’ve pinged MS about this and have not yet gotten a response, but our initial suspicion is that it’s immature firmware.

I posted this in the “old, usual place” - I have a question for the MS experts here…I received the Surface Pro 8 LTE version and I went ahead and ordered an SSD upgrade. There was a set of instructions posted on Windows central for updating the Pro 8. All seems straight forward. Except when I go to the Surface Recovery image download site. There is no option for the LTE version; when the Pro 8 (non LTE) is selected & my SN is inputted; I get an error message?

Only difference in experience is that you will have an extra reboot if you reinstall/reset it.

After Windows is fully installed, and you’ve gone though initial login etc, device enumeration will detect the LTE card, install the drivers, then ask you to restart the system one more time.

@Desertlap Thanks for the info. Any other place to download the recovery files for the Pro 8?

I see what you are talking about now that I try it myself. We get our software through our developer portal.

I suspect the issue with not recognizing the S/N is just a temporary one because the LTE models are new and MS just hasn’t updated the support site yet.

A really kludgy work around would be to do a full reset on your device, select the download from cloud option for Windows and then before it restarts and starts installing Windows, take the SSD out of the unit and connect it to another PC to grab the ISO

You can say that again. Microsoft dropped the ball and totally forgot to whitelist the “for Business” models in their driver packages (tried both the Windows 10 and 11 ones on 10 and 11 respectively). I actually have a ticket open with the Surface Business support team regarding this. If I was a sys admin trying to deploy these right about now, I’d be in a real rough patch. There are no drivers to deploy! 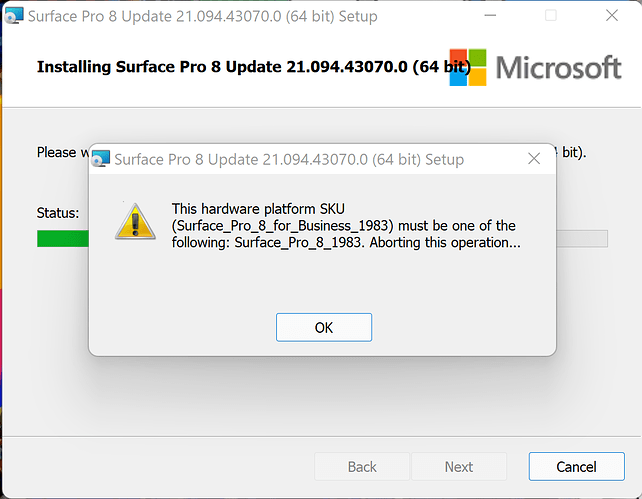 Got a shipping confirmation email from Matthew at ITsavvy. Yeah!
Authorization of purchase of these demo units are pretty much random.

Let me save you all a week of trials and tribulations and tell you flat out that the Xbox harvested Western Digital SN530 SSDs that are selling on eBay should be avoided like the plague unless you fancy BSODs and waiting and hoping. It’s quite simple: the Surface Pro 8 hardware and/or firmware currently has a compatibility issue with them. Others have reported this issue since at least October 31st of last year, but I have gone further and deep dived and tested without any thermal paste and with, including using top-of-the-line extreme overclocking-geared Thermal Grizzly with Microsoft’s stock thermal shielding, and the issue occurs regardless. After going through five different units of the Xbox Series X version 1TB SN530 SSD (unlike the consumer version, these have a custom ASIC so they operate at PCIe 4.0 2x) that I bought from eBay earlier last year (for $120, right before the tech market pricing madness ensued) on the Surface Pro 8’s that I have, I can conclusively confirm that these drives are problematic as it currently stands.

What will unfold will be like this. With the latest and greatest firmware and drivers, you may or may not get, oh, say about 2 or 3 rounds of BSODs during initial usage (oomph). After these reboot cycles, if they occur, Microsoft’s very intelligent firmware will automagically detect the stability issue and will automagically throttle down the drive from 2800 MB/s to 450 MB/s speeds (as verified in CrystalDiskMark drive benchmark utility), where I am presuming it is operating in a PCIe 1.0 x2 safe mode of sorts. At this point, the SSD will finally get a hold of itself and even work after multiple shutdown, sleep, and restart cycles and never again BSOD (if it did; in one case, the system caught the stability issue at first run while I was maxxing out the drive with CrystalDiskMark and throttle down in the middle of my benchmarking) anymore albeit at this sharply reduced maximum performance grade. Granted, this is still technically SSD speeds, only legacy SATA-level (double oomph).

You will have to weigh your options here: pay ~$220 for a confirmed working 1TB SSD (Samsung PM981), wait and hope (patent pending, @Bronsky Industries) that Microsoft releases a fix for this performance issue, or pony up and pay the Surface Tax for a full fat 1TB Surface Pro 8. Pick your poison.

You can say that again. Microsoft dropped the ball and totally forgot to whitelist the “for Business” models in their driver packages (tried both the Windows 10 and 11 ones on 10 and 11 respectively). I actually have a ticket open with the Surface Business support team regarding this. If I was a sys admin trying to deploy these right about now, I’d be in a real rough patch. There are no drivers to deploy!

Microsoft just refreshed their drivers to support the Surface Pro 8 for Business, so issue resolved.

I’ll go even further, we have tried that drive both in our custom devices and in a Dell that has the same form factor SSD as the Pro 8.

Based on what we’ve been able to observe, the problem is with the drive. TLDR under load (extensive reads and writes) the on board microcontroller overheats and either gets erratic, or fails totally.

It’s possible there may be some way to cool it sufficiently, perhaps in another device, but certainly not in a tightly packed Pro 8

PS: Windows 11 exacerbates the problem a bit as well given that it more frequently reads and writes to the disk (mostly the VM file) compared to Windows 10 in systems with less than 16GB of RAM

Another reason to consider 16GB RAM as the new minimum for new devices like this.

Let me save you all a week of trials and tribulations and tell you flat out that the Xbox harvested Western Digital SN530 SSDs that are selling on eBay should be avoided like the plague unless you fancy BSODs and waiting and hoping. It’s quite simple: the Surface Pro 8 hardware and/or firmware currently has a compatibility issue with them.

Thanks! I hadn’t read any of those earlier reports.

I have been chomping at the bit to buy a SP8 since they were released. Over a month ago I ordered one of those 1TB WD SN530 SSDs in anticipation of installing it in a 256GB SP8.

I live in Mexico (where SP8s aren’t released yet) and ordered online from B&H Photo. It got hung up in Mexican Customs and was returned to B&H. I found another vendor on eBay who collected customs duties/fees in advance so thought they could get an SP8 to me, but again caught in Mexican Customs and returned. In the meantime I became aware of the HP Spectre X360 14 which seemed like a reasonable alternative to the SP8. I decided to fly to the USA and do a hands-on evaluation of the SP8 and the HP. The pendulum swung in favor of the HP when I found a $1499 price on hp.com and Best Buy price-matched it. (Best Buy posted price was $1729 which was competitive with an SP8 + Signature Keyboard.)

That left me with an orphaned WD SSD which I placed in a USB-C m.2 case .

So, thanks to MX Customs and hp.com I dodged a bullet and did not end up with a 256GB SSD SP8.

PS: I’m a Surface veteran: I have a Surface 3 and a Surface Pro 6 and have no complaints with either of them.

That left me with an orphaned WD SSD which I placed in a USB-C m.2 case .

That’s the strange thing about it. I have been able to use these drives in m.2 enclosures and on desktop computers with no cooling or thermal interface applied and the drives never throttle, shut off, or what not even after hours of hammering them with sustained benchmarking and burn-in workloads. It could be a thermal issue as @desertlap explained, but from some reason, I have never experienced it except in the Surface Pro 8, meaning in a tablet. It could be a power consumption issue given that it also impacted a Dell tablet where it could be exceeding firmware defined power limits. Unlike the consumer version SN530 which was conceived originally for PCIe 3.0 x4 operation, the PCIe 4.0 x2 retrofitted version that went to the Xbox Series X possibly got pushed past the tipping point for power draw.

That’s the strange thing about it.

Yeah, I don’t think it’s a heat issue per se, but perhaps a heat-issue-in-a-tablet where the tablet may get alarmed at a high temperature reading and send signals to the SSD to throttle? I just ran some CrystalDiskMark tests with the WD SSD in the USB-C enclosure, including one at 9 x 64GB. Even at 3 x 512MB, the temperature reported by the SSD rose quickly to >80°C, staying mostly at 83°C, and the SSD did not throttle. So, the SSD itself is not initiating throttling; it seems the tablets are. (Or, are the SSDs getting considerably hotter that 83°C inside the tablets?)

With the SSD reporting >80°C, the metal enclosure was uncomfortably hot to hold. The SSD does not make direct contact with the case. I’m wondering what would happen if I put thermal pads on the SSD. Would it make the metal case searingly hot and/or would it keep the SSD from reaching 80°C? Even though the SSD doesn’t throttle, operating at that temp can’t be a Good Thing, can it?

FYI/FWIW, here’s the speed being reported on CDM. Regardless of the settings chosen, the speeds are within 5% of this: 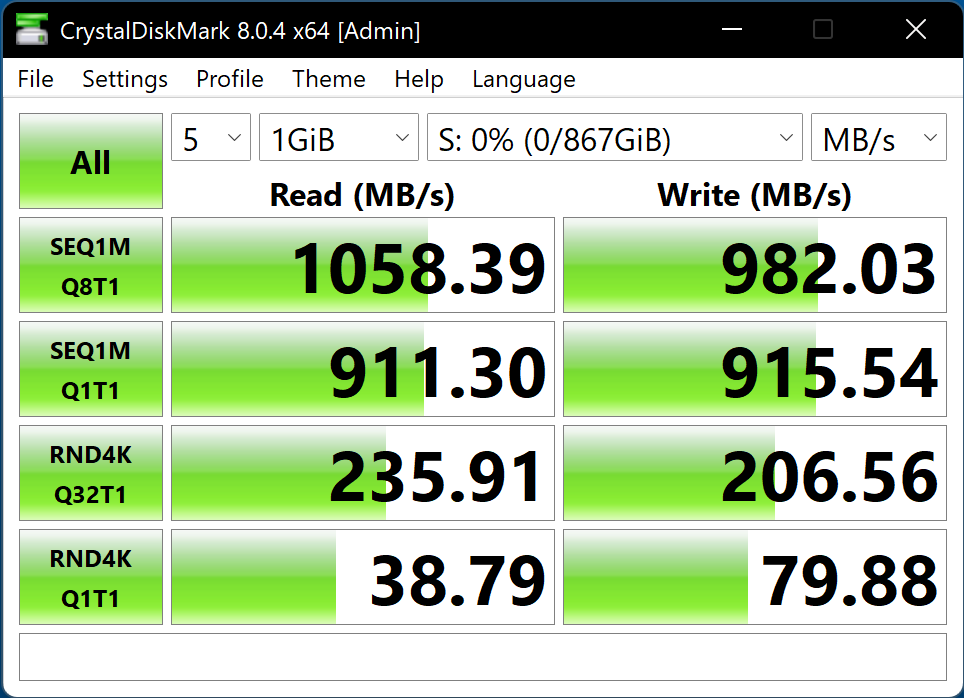 I really don’t have a use for a 1TB external SSD. I’m thinking of just using it as an additional scratch disk with Photoshop.

Well, during my testing, I did try something to rule out if it was thermally related, so I ran my Surface Pro 8 without the SSD door cover on and put a medical cold compress fresh from the freezer in direct contact with the SSD. The result? The SSD still throttled. So I am almost certain this is not thermally related but more a product of power consumption.

So I am almost certain this is not thermally related but more a product of power consumption.

Or with a more diabolical and cynical view: Microsoft hardcoded the SP to torment those of us unfaithful who deign to install a non-Microsoft-provided SSD in the slot.

Seriously, though, I agree with you. It’s non-heat related, and power consumption is at the top of the list of other possibilities.