From the old forum, a thread to discuss the Surface product launch cadence. We can use this thread for launch rumors as well.

The Surface Wikipedia page has a handy graph showing when the various Surface Products were released. 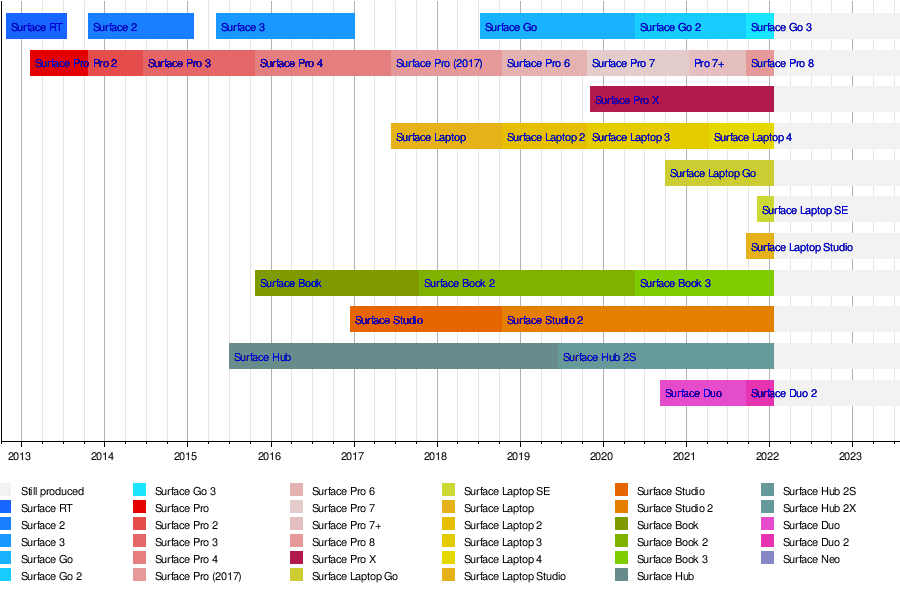 When can we expect new models folks? Anyone heard any rumors? Yes I know we just got the SLS and the SP8), but where is that Surface Studio 3 and the Surface Pro X2? And when can we expect the SLS2 with Alder Lake?

Asking for no particular reason, what are the odds that we’ll see an Alder Lake Surface Laptop Studio before Summer 2023?

Pretty high, I would say! The Surface Team typically releases a refresh every 12-24 months. We got the Surface Pro 5/2017 in June 2017, which was about a year and a half after the Surface Pro 4. The Surface Book 2 came two years later from the original release arriving in November 2017. With the Surface Pro 8 and Surface Laptop Studio both being totally new design tracks much like the Surface Pro 4 and Surface Book were back in 2015, they might want to hurry to get those revisions that didn’t quite make the cut for the first iteration in. I think Alder Lake might accelerate that too seeing that the only notable improvement performance-wise (for consumers anyway who never saw the Surface Pro 7+) was the integrated Intel Iris Xe Graphics. With another Apple M series processor update inbound likely for this coming fall in the iPad and MacBooks, I think Microsoft doesn’t want to let their CPU performance to lag for too long when pegged against such competition.

I’m personally torn on just going all chips in for the Pro 8, or waiting for a Pro 8+/Pro 9.

The Pro 8 represents everything I’ve ever wanted in a Surface Pro. I just have trouble justifying the purchase at this moment, I really don’t’ want a 8GB model, and with the keyboard/pen price, and tax, it will well be $1500+, and I can’t reconcile that price with something I don’t have an actual current need for. (Pro 5 still works, zBook X2 has a new lease on life, and my M1 Air and 12.9 iPad Pro are still all running good). However the CPU changes for the 12 gen are definitely enticing enough for me to consider waiting for that.

Given how they M1’ified the 12gen by upping the core counts to mostly 10 to 16 cores with varying combinations of efficiency and performance cores, this should be more significant then when they jumped the 15w ULV CPUs from Dual Cores to Quad Cores with the Pro 6. Even if Apples M1+ or M2 Air’s still outperforms the 12th gen, this will at least level the playing field for Intel/Microsoft.

But on the old board, Desertlap did float a rumor that Microsoft might release a Pro 8 + with the 3050ti graphics in the Laptop Studio crammed into a thicker Pro 8 chassis. I’d imagine that would likely also get 12th gen chips.

The Pro 8 is currently in a similar situation that the Pro 3 was. New design, but old/same hardware. The Pro 3 was to the Pro 2, as the Pro 8 is to the Pro 7+. Dessertlap also alluded before the Pro 8’s release that the iteration of the Surface Pro that would come after the Pro 8 would be an even larger jump then what we were getting with the Pro 8.

All that being said, I still think the most likely time line would be for the June or October time periods.

I’m personally torn on just going all chips in for the Pro 8, or waiting for a Pro 8+/Pro 9

If you can afford to, my advice would be to wait, at least until the early Fall. However, if your X2 has failed and you need a replacement, of course go Pro 8 now…

If you can afford to, my advice would be to wait, at least until the early Fall. However, if your X2 has failed and you need a replacement, of course go Pro 8 now…

@SteveS, how dare you advise against a tech purchase on Enablers Inc.?

@darkmagistric, ITsavvy is your friend. Take advantage of the deep discount on the demo units.

This. @darkmagistric, when I checked just now, ITsavvy had around 20 different configurations of the Surface Pro 8 demos available. Plus, if you pay an extra $50-$75 or so and opt for an LTE model like @Nnthemperor did, that also further increases your resell value so by the end, your total net investment ends up being just a few dollars “rent”/“lease” per month.

Considering I still have the CDW order still on eternal backorder, I am somewhat hesitant to try another one of these Demo deals.

However unlike CDW which was seemingly easier to make an account, ITsavy is requiring the company name, job title, how many employees, etc. Do they verify any of that information? Like if I put my day job on it, or just make up a company, would they check or call?

ITsavy is requiring the company name, job title, how many employees, etc. Do they verify any of that information?

It seems like they don’t but from what I understand MS might. I recall reading about people on TPCR getting their orders cancelled (maybe even our own @Hifihedgehog?) at this type of place, not sure what the chances of that are with iTSavvy.

Ironically when I was writing that post I had thought my X2 would be fixed. Sadly jumped the gun on calling that. But the zBook has been out of commission for a minute so I’ve adapted to my M1 Air & 12.9 Pro setup for mobile uses, so I could definitely wait still. If the M1 died, that would be a different story.

The trick is to register as a sole proprietorship which is always an option.

not sure what the chances of that are within iTSavvy

Pretty much very low of getting canceled and if you do which did happen only once and that was to @Nnthemperor, who reordered and it went through, everyone who has ordered has gotten their orders fulfilled there.

@darkmagistric - I can vouch for @Hifihedgehog 's ITSavvy recommendation, but I am a sole proprietor with my own TIN (taxpayer identification number - even though sole proprietors are taxed under their SSN, I needed a TIN for insurance and other state regulatory requirements). Anyway, order went through without a hitch and now using the $1111 SP8 i7/16gb/1tb as my daily driver. At that price it is only $12 more than the M1 iPP 11 with 512gb.

Going to post this here - a YouTube review of the SP8 - because like this guy professes “I am slow on the uptake” and it took me several years to come to grips with the very simple proposition that I am “productivity first” so a desktop OS is the only answer, thus trumping my fantasy of the iPP 11 being my only device. The SP8 is 100% on 75% of my needs - desktop applications and Chrome (true confessions - I also have an iPad Mini 6 for my tablet obsessions with Kindle, News+. FaceTime, and iMessage - as well as couch surfing): I would say a few days at most generally.

And if it doesn’t come, do it again. I remember I tried twice or so.

The latest from the Surface rumor mill is that MS is indeed still experimenting with a Pro 8 +, possibly as early as Q4 of this year. The latest wrinkle is that in addition to a 12th gen core I chipset with Nividia, they are (and this will make @Hifihedgehog happy) also looking at a Ryzen 7 variant with the newest AMD integrated graphics.

Allegedly MS has heard from some of their more “important” Surface customer that there is a market for a beefed-up device in the Pro form factor (including disaffected iPad Pro 12.9 customers)

As well as those that have considered the new studio but find it too bulky/heavy/inconvenient.

The rumor is still that this will be in addition to and not as a replacement for the current Pro line and will be a bit thicker and heavier than the current Pro 8 (and possibly slightly lower battery life).

However, at present it’s being considered as a premium high end option with commensurate price to match.

Again, STRICTLY RUMORS at this point

How long does the registration process take?

@Desertlap : Interestingly, I’ve found that my ZBook X2, a 16 inch, 4+ pound, 4 year old behemoth (compared to my SP6 and SP8) still holds its ground as my go-to platform for many demanding tasks. At least for me, there really is appeal in a (relatively) beefed up mobile (or at least movable) platform. The X2 is one of those rare platforms where the OEM seems to have made design decisions that allowed the complete platform to come together in a “whole greater than the sum of parts” way. If Microsoft could manage something similar with an SP8+, I’d be first in line to buy!

I admit to being surprised. After Skylake I thought Microsoft would never go with a new Intel architecture without waiting for the second generation at least.