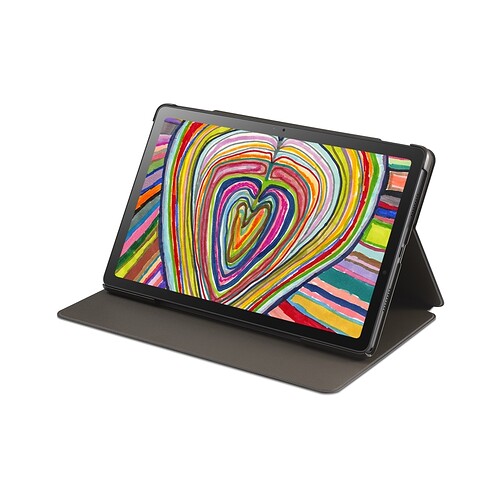 So essentially a Samsung Tab S6 Lite competitor going by price and other specs, with perhaps a bit better display…

I’d love to see one, possibly a customer will submit one for testing…

Well, the tablet market is cutthroat and they didn’t lay off many of the mobile team.

This is supposed to be pretty close in performance and accuracy to EMR isn’t it?

It seems to depend on the implementation. Asus’s hasn’t gotten great reviews.

My understanding is that AES 2.0 and MPP are pretty much the same.

Microsoft’s is the best, but I’m pretty sure they have dedicated hardware to improve it in some devices. I’ve tried the Go 3, which doesn’t such enhancements and it was noticeably worse than EMR to me.

And of course, you meed to charge the stylus.

It seems to depend on the implementation

Defeats the whole purpose of a genuine cross platform rival to EMR. As a consumer, you want to trust that that specific hardware is reliable and trustworthy across devices and then if Microsoft has added some “secret sauce” to make its own better - that just undermines the whole thing.
From what I remember in the past: accuracy differences in the old EMR on tabletpcs was down to Wacom manufacture differences rather than different manufacturers messing it up. I had a much vaunted HP 2760p with terrible accuracy which nearly put me into the Apple Pencil camp.

Anyhow, I’ve digressed from the LG Ultra but as a “creative” consumer - I want to read that AES 2.0 is uniformly accurate and reliable so I’ll give these a pass.

The thing is AES /MPP is dependent on touchscreen as digitizer which are sourced from many different manufacturers. It’s dependent on the price point that manufacturers pick a high or low quality touchscreen, and AES/MPP is mostly slapped in using a supported controller chip, sometimes as an after thought (in fact, many MPP supported devices wasn’t even advertised with pen support in their product page).

From my reading on this forum, MPP 1.0 <AES 2.0 < new MPP with the slim pen? MPP 1.0 seem to allow many touchscreen producer which cause inconsistencies while Wacom AES seem to control touchscreen quality better?

Apple did best partly because their touchscreen was so high quality that people can draw well using passive stylus before Apple Pencil was a thing. Some cheap touchscreen, on the other hand, are so terrible Mpp support won’t save them (wiggle horizontal lines).

Wacom EMR panels was mostly sourced from Wacom following the same specifications, so precision and line quality is consistent, it’s the calibration and shielding design of the OEM that caused inconsistencies in EMR implementation. Samsung did best with that.

Edit: in modern WacomEMR devices, they are actually consistently good.

Most other devices that add a pen for the sake of having a pen already jumped on the AES/MPP bandwagon to save cost ( less parts and cheaper licensing).

Those who still pay extra for EMR would actually try to make it good and advertise as a premium feature (hp zbook, Acer concept D7 D9, Samsung 360 etc). Even my cheap little Raytrektab 8 have flawless implementation of EMR because it is heavily advertised for artist.

It’s the Slim Pen 2 and associated stuff which boosts MPP to near parity with Apple’s Pencil. And Microsoft only implemented it on the Surface Laptop Studio and Surface Pro 8 so far. The first Slim Pen isn’t different from any other Surface Pen except shape & rechargeable battery.

The question is if MS is licensing the tech to partners or keeping it for a Surface exclusive. And if licensed, if the price is too high or if it’s reasonable. I have seen no hint of OEM partners implementing the new MPP tech; I suspect Microsoft will shoot themselves in the foot once again.

They also aren’t pushing the haptics feature that came with the Slim Pen 2. There were a few programs that implemented it at launch last year and I know of no new ones since. Another shot in the foot similar to how the Surface Dial never got adopted by any apps post launch. (I don’t even see it listed on the Microsoft Store; silently killed?)

I may well be misremembering, but I’m sure there was some Pixelsense or something silicon in the actual Surfaces that decreased the jitter, not just the new Slim Pen (which as far as I know only had a rumble motor added).

Yeah I was talking about new MPP with slim pen 2, as it seem it needed the combination of both updated MPP hardware and Slim pen 2 for best pen experience. I don’t know if a high quality touchscreen also play the role but it must be necessary.

I still think one of the reason MS is not outsourcing the new MPP was because it required a combination of components for it to work, and if the OEM even cheap out on even one of the parts, it would bring bad rap to the new MPP just like MPP 1.0

That’s not a problem for Apple because they only have a few models to support, and their touchscreen mass production was already standardized.

Back to topic, I’m seeing quite a few Lenovo P11 2022 version here with same spec ( snapdragon 680 4GB )11 inch 2k for 170$~ Lenovo tends to use Wacom AES 2.0 which seem to have better reputation than MPP, and I remember someone on the old forum mentioned that some Lenovo Windows tablet and monitors had near perfect implementation of AES with little jitter.

Again this LG tablet would need aggressive pricing to be able to compete.

I still think one of the reason MS is not outsourcing the new MPP was because it required a combination of components for it to work, and if the OEM even cheap out on even one of the parts, it would bring bad rap to the new MPP just like MPP 1.0

What’s to stop the bad reputation happening all over again if there are lots of different components that make it work? On a forum like this - people will read up, watch videos etc etc and discuss to agree the best versions but for some people, they just want to buy something that works first time out.
That’s where I think Apple’s Pencil on iPad and EMR on some PC tablets will always win out.

Yeah, AES/MPP is generally the low cost option that add pen support to budget device, or a cheap way to add note taking ability to business devices, where the finesse of pen control is not highly regarded.

Pro: it add pen support on budget devices that wouldn’t have it otherwise (like the 150$ Lenovo M10 plus).

Cons: drawing quality varies, but surely worse than EMR, pen must be bought separately, and affordable pen is harder to find.

If you want something that just work, Samsung Android and Windows devices are still best. Their EMR implementation is flawless, products are well stocked, and pen is included inside the package. The cons? S-pen tax make their device considerably more expensive than similar specced devices that use AES. Like the Mi Pad 5 with flagship spec (pen not included) but price was only on par with the Tab S6 lite.

add note taking ability to business devices, where the finesse of pen control is not highly regarded.

My very first real world experience of a pen-abled device was when I signed my name on screen to set up a mortgage when the advisor came to visit in 2004. Reminds me also why accuracy in the edges wasn’t important for business-class devices and that was because you always signed in the middle of the page (which meant screen). As long as it looked reasonably like your signature, it was fine.

As artists, we’ve complained ever since that these devices ruined the drawing experience but in reality, they were never meant for us. AES/MPP and even EMR will always largely be designed for the average user who (very possibly) doesn’t really care too much about pressure and artistic integrity of the tool.
I’m not including users here or people out there who have a strong interest and pride in their analogue writing tools - I’ve bumped into many people who can’t draw and would never call themselves “artists” but who will happily spend hundreds or even thousands on hand-crafted writing instruments and fountain pens.

New rumor today on this device. It might get a wider release including the US and EU as a TCL branded device aka possibly the “TCL Tab Pro”.

This is not a new thing for either company as at least three of their previous tablets have been white box devices that have been released under various brands in various countries.