So, since I seem to be in rant mode this morning…

I wonder if reviewers even read the companies in question own press releases. Apparently not in this case as Lenovo positions the 13 inch he mentions as an entertainment/multimedia focused device, and the P12 Pro as a productivity and creative focused device. He sort of acknowledges it in the text, but utterly without context.

" its Snapdragon 870, a chip that provides much of the same power as the top-end Snapdragon 8 Gen 1 but without the overheating or battery-drain problems that plague the latter"

But anyway we have tested this tablet and it passed our certification with flying colors and is a solid option, especially if you don’t like Samsung and their One UI

Arrrgh, get off my lawn…

Arrrgh, get off my lawn…

You’re starting to sound like me old buddy. So many tech reviews come across as my momma’s scathing review of my junior homework papers each morning - “Looks like you gave this one a lick and a promise!” However, he inadvertently stumbles over the real issue - the iPad Air 5 (with M1 8gb/256gb) is $749, and the Apple tablet ecosystem is so far ahead of Android it is not even a contest at the P12 price point.

I sort of agree but I also think that at this point, the vast majority of people that would have read this have already ruled out an iPad for whatever reason and decided they want an android tablet to complement their Android phone.

So by all means he should compare it to Samsung , also perhaps some of the newer hybrid Chromebooks as I know several customer we have , have started looking at them.

TLDR too many tech “reviewers” are just flat out lazy and slipshod. and that extends to those who just run a few benchmarks and base everything completely on that.

However, he inadvertently stumbles over the real issue - the iPad Air 5 (with M1 8gb/256gb) is $749, and the Apple tablet ecosystem is so far ahead of Android it is not even a contest at the P12 price point.

So Lenovo went from mid range with P11 to high end with P12 Pro?( I wonder if there is any regular P12 in the middle). The P11 was going for pretty cheap in our country (~250$) and it also had pen support.

That aside, this P12 Pro looks like a great package. 12.6" is even a bit bigger than the Tab S8+, and included pen is welcome. Paired with top end spec and it’s a solid competition to the Tab S8+. I notice the pen is wirelessly charged like the Apple pencil. I wonder if it was MPP or AES, and if Lenovo used a good enough touchscreen for pen performance (they seem to have had a good track record with AES on their older Windows devices)

This would looks great for someone needing top-end hardware, big screen with a pen for considerable lower price than comparable tablets. It would probably need to be discounted a bit more to compete well though.

Still, as someone who need tried and true pen performance, I probably would try saving a bit more for the Tab S8+. It’s just the reassurance that Samsung 's application of EMR is always flawless, while MPP or AES is something you have to buy to try out ( usually without generous return options) that I would stick with Samsung for something this expensive, if I’m looking to buy one.

also perhaps some of the newer hybrid Chromebooks as I know several customer we have , have started looking at them

The new Acer tablet/chromebook looks interesting (except for the fact that I really have no use for a Chromebook). I can’t tell if the pen is EMR but Acer has used Wacom before. The 7xx CPU is likely a way to keep the price down to the $400 starting price. It should have had an option for the 8cx.

Why wouldn’t Acer put this out with a WOA option? Not enough support from Microsloth?

Edit: BTW, the new Chromebook standards, with the required pen technology, are prompting some interesting designs for Chromebooks, which oddly enough, seem to be real competition for Apple, as Windows sits idly by losing market share.

@Bronksy wins word-pun of the day…of course, if the shoe fits is it a pun?

@Bronsky All of the new chromebooks that have active pens use USI. Decent, comparable to low/mid level MPP but nowhere near EMR IMHO

@CrazyCat yeah the pen is MPP based. Pretty good in this case, but still a couple of notches below EMR IMHO.

OTOH the display is superb, and it’s actually a Samsung panel

PS; I’d still recommend the Tab S7FE for most customers, especially with some of the discounts we’ve seen of late. And very few apps take advantage of higher end specs in an android tablet, even more so than with the iPads

I thought the Chromebook new standard is “every new Chrome book with pen support must use USI”, not " Every new Chromebook must have the USI standard". The later sound too good to be true and might cause backlash.

Yes, every new Chromebook starting in 2021, if it supports an active Pen, must do so via USI. technically they could support other pen tech in addition but I doubt they’d bother.

This requirement doesn’t apply to Android Tablets though. And there is nothing that would prevent an OEM from using a USI pen, though I haven’t seen one yet.

PS; I’d still recommend the Tab S7FE for most customers, especially with some of the discounts we’ve seen of late. And very few apps take advantage of higher end specs in an android tablet, even more so than with the iPads

Yeah it’s the reason I’m sticking with my S7 FE for a long time, it perform well enough for my needs, and the big screen is beautiful with flawless pen performance. 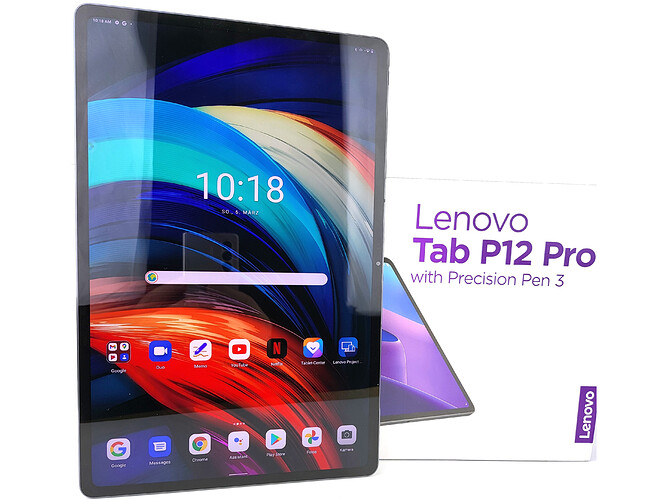 The Lenovo Tab P12 Pro features a 12.6-inch display and plenty of performance. Find out whether or not it is worth to buy.

This is actually a better review that tell us more about the device instead of talking down on it for a whole first page without giving any valuable information.

It mentioned Lenovo Project Unity which is designed to connect the P12 as a secondary screen with pen and touch for Lenovo Windows PC. I find the app on Google play but it is not compatible for my device, and doesn’t show if the connection is wireless or wired ( likely wireless because it is limited to 30hz according to the article). The screenshot show a specialized connection interface, so it’s likely to use Lenovo’s own software instead of being an universal wireless display like Samsung second screen.

@CrazyCat Good find, thanks for that. We didn’t test the secondary display function extensively other than to verify that it functioned but our documentation from Lenovo states 30 hz wireless for project unity and 60 hz when connected wired.

Interesting that Lenovo is only putting GPS in the 5G version and not WIFI. We tested the 5g version so we didn’t notice that. Absence of GPS on WIFI is likely not an issue for most, but good to know regardless.

BTW: As of Android 11, when one Qualcomm device is tethered to another and one has GPS (almost always the phone) the two devices can make use of the others GPS.

Interesting, so the second screen also work with wired via USB C? Samsung should take a page from their book if that’s the case.

The notebook check review said that Lenovo added Windowed mode with something like task bar, I wonder if they work well.

I thought the switch from regular mode to Dex mode is just an interface change, but when I did it on my tab S7 FE, I noticed high usage of resources on both CPU and RAM with just Dex running.

BTW: I meant to mention this in my original post, but if you are really itching to try out Android 12L on a tablet, right now, the P12 is the only “approved” system to do it on. And that’s why we obtained one for our test bench

Bear in mind it is still in beta though so you might not want to use it on a production system. For instance the last update appears to have borked the orientation sensors about 75% of the time.