Leaving Windows for the Walled Garden - The Experiment Succeeded

Apple will never do gaming …

Yeah, that’s not what we mean by “gaming”, I know. Though it does seem to be the cat’s meow for others.

Seriously though, I would be 100% good getting rid of everything except this iPP w/MK and an iPhone if it wasn’t for Windows games and I’m not even into anything newer or more demanding than Witcher 3 or the latests DLCs for Stellaris.

Seriously though, I would be 100% good getting rid of everything except this iPP w/MK and an iPhone if it wasn’t for Windows games and I’m not even into anything newer or more demanding than Witcher 3 or the latests DLCs for Stellaris.

I was walking to my car with my iPP11 just now and my head was shouting - it would be GREAT if this were my only computer. Sub 2 pounds* in hand; computer, tablet, notebook all in one. It could also have M2, 16gb ram, 2tb ssd, and 5g by this fall and still weigh the same. If Apple would just give it full external screen support and Finder I’d give it a go in a heartbeat.

Maybe my obsession with “WinPad” will ultimately be fulfilled by a mere iPad. I would even live with a single 32” 4k monitor if it could be used full screen with the iPad

Paying more/for subscriptions for things that really shouldn’t be like so seems to be an Apple thing. I’m pretty sure it’s because developers consider Apple users to be more affluent, so more willing to cough up the money.

I don’t know that we consider Apple users to be more affluent so much as, Apple users already expect to pay for apps. Android gained a reputation as the cheap option a long time ago, and therefore the expectation for Android phones quickly became that you could get pretty much any app for free (with ads). That mindset has stuck and no one wants to pay for Android apps. But iPhone users expect to pay for their apps, and so they do. It’s also why a lot of developers choose Apple over Android to develop, even though Android is the larger customer base.

Maybe my obsession with “WinPad” will ultimately be fulfilled by a mere iPad. I would even live with a single 32” 4k monitor if it could be used full screen with the iPad

Honestly, yeah, if the IPP supported a second monitor with whatever aspect ratio, instead of just mirroring the 4:3 screen, that would do a lot to work for me. It would also need to support my VM I use for work, but since I already code on a Windows VM through my Macbook, I don’t really need the power of the Macbook for my work. Granted, I wouldn’t be able to do my personal projects as easily, but there are becoming more web enabled options. I think if we can get enough robust programs moving to web, an IPP with true external monitor support would work for pretty much anyone except some power users.

One area I’ve seen that with my own kids is when it comes to drivers licenses and car ownership. My daughter at least to this point can see no compelling need for either, even though she’s starting in to her junior year in college.

And my son, while he wanted and got his license shortly after his 16th birthday, that’s about as far as it goes and a car is quite low on his priority list compared to many other things.

I, on the other hand had my license on my 16th birthday and was already half way to the savings I needed to buy my first one.

I think this might be more a function of location, birth order and other factors that are less than uniquely generational. My kids grew up in the more remote suburbs of south jersey. For the first two years of highschool, we were parent/taxi drivers (like Travis Bickle) and had to shuttle our kids everywhere. They got tired of being in the car with us so much and could not wait to get their licenses. All three had licenses at 17 (min age in Jersey) and cars at 18, once they graduated.

Because they had cars, they could go live with their grandparents in the summers in Cape May and make a ton of money waiting tables at the shore. The two that went to state schools (Rutgers) for undergraduate also liked coming home on the weekends to catch up with their laundry, sleep in their old beds and raid the fridge (a lot of which they loaded into their cars and restocked their apartment fridges when they got back to campus).

I have also seen situations with their friends where an older sibling drives the younger ones everywhere and the younger ones are not motivated to get a license. But, for my kids, a license and cars were nearly obsessions.

I have also seen situations with their friends where an older sibling drives the younger ones everywhere and the younger ones are not motivated to get a license. But, for my kids, a license and cars were nearly obsessions.

At the risk of hijacking the thread, THIS.

One area I’ve seen that with my own kids is when it comes to drivers licenses and car ownership. My daughter at least to this point can see no compelling need for either, even though she’s starting in to her junior year in college.

When I hear about things like this all I can think is, “must be nice”. The no-car option was utterly and completely impossible when I was that age in Greater Los Angeles. And everywhere I lived since then as well. And I know if I asked someone that age in the nearest town (rural Nevada) if they could go without a car they’d look at me like I’m crazy.

Again, must be nice.

At the risk of hijacking the thread, THIS.

Not to worry - this thread has already run its course - next big experiment depends on 6/6/2022 - will iPadOS 16 bring me the chance to go iPad only this fall!

will iPadOS 16 bring me the chance to go iPad only this fall!

Yeah but given the insane prices on used cars coupled with gas prices… They are likely at least somewhat temporary but still. My son even commented that “looks like I wont be buying a car anytime soon”.

Of course geography is a major factor as we live in the suburb of a medium sized city. OTOH my brother in law lives in fairly rural Georgia two kids don’t seem to be in any hurry either, not arguing different circumstances , just saying…

And that I think does contrast from when I was that age where getting a car was a nearly universal goal.

In the UK you don’t really need a car unless you live in the countryside and even then you can get by, just about.

Growing up, all my friends and classmates were getting their licences, but I didn’t get mine until I was 19. Living quite rurally though, I was all over driving once I could. I think my mum started to resent me a bit for hogging the car for several years!

I rather my money be spend on tablets & phones than a car these days.

In the walled garden of public transportation in Japan it is an ironic twist of fate that they are dominant in the automotive sector. On the other hand you rarely see a lawn either and mowers is also a productive sector. So yes, a car in Japan is not a mean of transportation it is an extension of a living room. Kind of like Apple’s product line. In case anyone want to get back on topic.

I think the idea of using an M1 iPP as a headless display for an M1 Mac Mini is super cool. Wireless so you can just pick it off the stand and lounge on the couch or whatever. 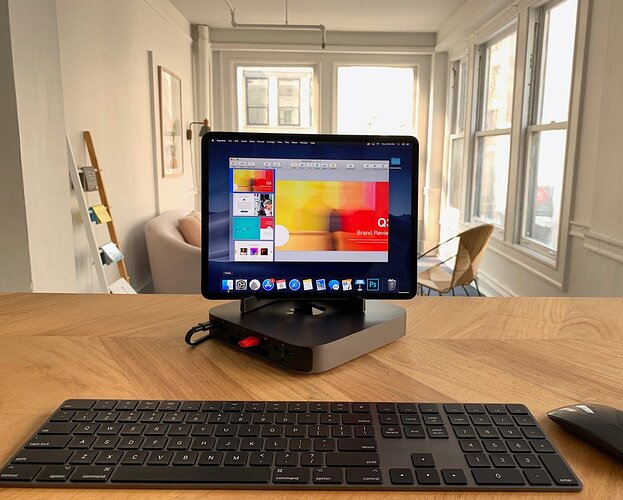 Setting up Luna Display in Headless Mode - Knowledge Base

What is Headless Mode? Using Luna Display in headless mode allows you to turn your iPad into the primary display for a Mac mini. It allows you to combine the pr

How well it works in action is the question.

… And I’m going to have to give it a try. It’s just way too tempting. The reviews are inconclusive and mostly from right out of beta a year ago and not much help. So I have a Luna Display dongle on order. And a used minimal M1 Mac Mini as well (well, I got the 16 GB RAM because games, but only 256 GB storage). I know I’ll sell it and upgrade to the M2 redesign if it works out and external SSD will supplement it fine till then.

Updates: The Luna Display beta was for the Windows compatibility & HDMI version. It’s been around for the Mac for a couple years longer. The wildly different impressions seem to be due to how good/bad the person’s Wi-Fi is since it does need both devices on the same network. Connection via USB-C is an alternative. Big jump in price since most of the reviews, which cite $80. It’s $120 now. But unlike SideCar and others you can use touch to a great extent in MacOS, on the iPad, along with Pencil. A regular monitor on HDMI (which I have) is needed to set up the headless state… and for if/when things go wonky, and I would guess things will have to be set up again after major updates.

iPad mini 6 sold eight hours after listing on Swappa. That’ll cover a good chunk of the cost for this experiment.