I would like some suggestions please! I like to use my tablet as my main PC, much of the time it is on a desk with a second monitor and bluetooth keyboard/mouse. However, if I have an online yoga class, I would like to take the PC to a different room, and I need a large screen to see the video clearly. I also like to occasionally take it to the sofa in order to watch videos, play simple games or read.

Currently have a Dell XPS 18, which I think is wonderful; it’s powerful enough to run full Windows and use MS Office, and it has a massive 18 inch screen so it is a similar size to the second monitor on my desk. Unfortunately, after 5 or 6 years, it is showing signs of wear, and in spite of a lot of Googling, I’ve been unable to find anything equivalent!

I know there is a Dell Inspiron 7706, but it seems that is not available in the UK, only the states - I don’t know if there are any rumors about that becoming more widely distributed? And ASUS have just announced their Zenbook Fold 17, which looks very nice, but who knows how long that will take to be released, or how much it will cost. Both of these are 17 inch screens, I really don’t want to go down to 15 inch if I can help it - does anyone have any suggestions?

Don’t know how you do that, but an 18" device would be quite a challenge to use for couch surfing.

I think Samsung or was it Google made a cheaper version of the Surface Hub. How about getting the 15" SB3 so you can use the clipboard on the sofa and connect to the larger Hub-like screen for your yoga lessons?

That will definitely cost more and add an extra device though.

Pretty good idea, just remember: no kickstand, so you’d be holding it for the entire couch surfing session.

Side note: they should have sold the screen separately and called it the MS Surfboard

The XPS 18 has fold-out legs, so you can just rest it on the couch next to you, and it’s at the right angle to see the screen…
Could maybe get an old one on eBay, but it seems crazy to do that for such an old machine!

Well, Samsung have abandoned that product line, so there’s not really any option there. I don’t think there’s much demand in the ‘desktop replacement’ category for tablets. They are either wanted for mobility, or as stationary desktop peripherals (so have no batteries).

So it’s either old products (the Dell, or the Samsung Galaxy View), get a long HDMI or USB 3/4 or Thunderbolt cable and run it to a large touch monitor, or use a monitor wirelessly with Miracast.

For the Galaxy View, you could use RDP/desktop stream to use it with Windows.

I’d stick with the Dell if you can, if not get the Galaxy View. If you don’t mind a cable, then a monitor like this might work.

FWIW I’d steer clear of the Galaxy View regardless. Every single one we are aware of in our customer base has come to a premature end. And if I’m not mistaken there was a safety recall on at least one of the versions.

Is there no touch/pen-enabled monitor in the Surface Hub form factor? That would be great and come cheaper than the insanely expensive Surface Hub.

Surface Hub is TV size though. Samsung have released a few competitors, but they are also massive. And as you mentioned, expensive.

Viewsonic and Planar make 22-24" inch multi-touch screen monitors that can lay flat, sit at a low angle (for typing), or stand upright. These have standard VESA mounts that can accept a mini-PC or micro-PC on the back. Of course, they also want electricity outlets and happily suck it up.

I have one of each here.

Just for fun, look at this Surface, perfect for bench surfing 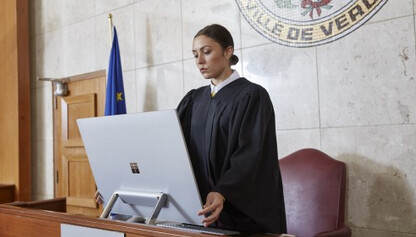 The Surface Studio is an amazing piece of hardware - a shame MS didn’t modernize it with latest SP8.

Does it mean they’ve abandoned it?

Quite likely it has been abandoned. That being said, Best Buy still has them on the floor. I think at this point, its the oldest device they have on their show floor.

As far as a Studio 3, I would like to think they are waiting for the 12th Gen refresh since that will bring substantial changes to the CPU architecture, which at the very least will make it more comparable to Apples M1 for marketing purposes. And since they don’t typically update the Studio every year, it would make sense they would wait for the bigger upgrade.

I would personally like to see Microsoft go more toe to toe with Apple. A 12th gen Studio 3, A Standalone Studio monitor, and a Surface Mini desktop. That would be a good way to combat the eventuality of M1 pro/max hitting the iMacs and Mac Mini.

I’m lurking in this thread in the hopes that someday (like this coming October), The Surface Studio 3 will be announced. I NEED IT.
I’m holding out hope that it was delayed simply because of pandemic supply chain issues, and now that it’s been a few years, they’d have had long enough time to get things back on track.

the studio laptop is great, but ultimately disappointing to me personally.

At this point my current laptop is so old, that virtually anything would be better and I’m more than ready to have that beautiful-looking device in my home.

I just hope that they make the base modular this time, so it has a much longer life.

Your best bet is still to get a graphics tablet display.

My doctor uses a Wacom one. No idea why, as all he does is mark up x-rays on it. Guess he had money to waste and wanted to be patriotic and get a local companies products. Seems to serve him well though.

RE: A Surface Studio 3. two things

One: Despite it’s seemingly insanely high price. we’ve heard from multiple sources that MS at best breaks even on the Studio likely mostly due to the very small numbers that are actually produced (and BTW the Surface Laptop Studio is allegedly in the same category)

Two: We have heard a successor is in the works and that part of the delay is Pandemic related supply issues, but not the obvious ones. Allegedly MS is waiting on availability of MiniLED displays in a Surface appropriate size to be more broadly available. Right now Apple and Samsung themselves are consuming the entire supply.

FWIW. I think the addition of miniLED would be a killer feature and sway at least some of the current iMac Pro users that would still like a more all in one form factor or aren’t ready to embrace the M1 yet

Interesting. I figured the SLS was niche but didn’t realize it was that niche.

FWIW. I think the addition of miniLED would be a killer feature and sway at least some of the current iMac Pro users that would still like a more all in one form factor or aren’t ready to embrace the M1 yet

Yes, A surprisingly large number of iMac Pros especially spend at least some of their time in Windows via boot camp or Parallels. And with the murky legality with WOA and Parallels on the M1 they are holding off.

iMac Pros are often " production" types of devices where they get used for specific tasks repeatedly and sometimes by multiple users as well.

To give one specific anecdotal example, one of our LA based customers uses AutoCad in boot camp to do a lot of rendering, but then the output is brought into Final Cut Pro for additional tweaking. That being said it’s also at least partly due to how far behind the mac version of AutoCad is compared to the PC version.

adding $7 to my piggybank in preparation for the 2022 Surface Studio update.

I’ll have one in no time!