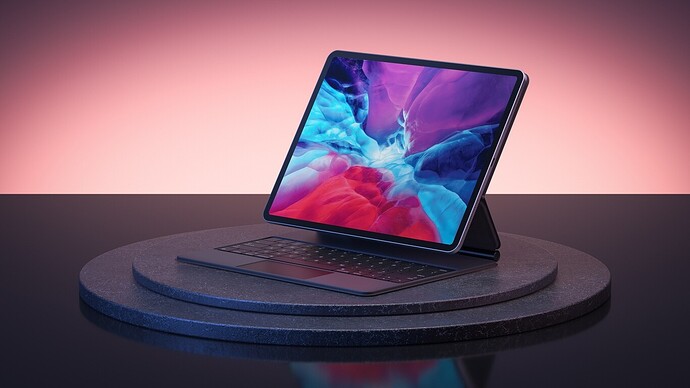 I realized that all the other iPads have their own topics and that discussion of the 12.9” was encroaching on the iPad Pro 11” topic. So here’s a place for the biggest iPads. Future proofed a bit by including larger iPad Pros down the road.

All hail the iPad Pro 12.9, the only iPad with a contrast ratio better than 2000:1. Five hundred times better in fact (thanks to the miniLED display).

Cool. Every time I use my daughters 12.9 and drool over the display, I reconsider why I stick with the 11.

OTOH, reading an ebook for more than half an hour or so reminds me why I have the 11.

PS: I think mentioned this on the old board but not here, but the Pro 12.9 has the best display we’ve tested in a portable full stop, even slightly beating out those in the MacBook Pro 14 and 16.

Yeah, I’m really curious as to how I’m going to react to the 12.9 iPad Pro. The 11 inch is indeed a very good e-reading experience and I’m not expecting to use the 12.9 as an e-reader very often. I probably wouldn’t have switched if I hadn’t been completely won over by the Surface Duo for e-reading for the past 1 month straight. The honeymoon should be over but I still have no urge to use anything else and I’m reading significantly more often than before. Resurging physical two-page reading muscle memory? The lightness and ease of holding the Duo? Dunno, but regardless I found I no longer used the iPP 11" for e-reading. So why not explore something new? I’m not getting any younger, you know.

I pick up mine in two hours.

I’m still deciding/dithering on this myself as I want to replace my 2018 11 Pro with something fully stage manager external display compatible. My daughter who uses the 12.9 as her primary device, along with her iPhone is also a big kindle user.

The adaptation that she made is that instead of holding the iPad in portrait more in front of her reads eBooks in landscape mode with the device in her lap.

I’ll have to give the two-page mode plus landscape a try in the Kindle app. That might be a surprisingly good experience in my lap.

So why not explore something new? I’m not getting any younger, you know.

Trying it on for size…

They’ve improved the transfer process until it’s almost perfect now. Almost everything transferred from my 11 inch to the new 12.9 inch flawlessly. The one exception was the videos in the VLC folder. But I had those backed up on my iPhone just in case, so Airdrop took care of it.

After transfer it was an easy process to turn off Find My iPad, deregister the device from iCloud, and then erase it. Just one tap on a button and everything is done properly and it’s ready to trade in or sell or give to someone.

They have the new $7.95/mo AppleCare+ along with the usual $150/2 yr plan. I went with the former this time because, well, I do tend to switch devices often and I won’t overpay if I do so with this one. On the other hand, even though it costs more that way for two years, if I have it that long I might be keeping it well past two years, as I did with the Fujitsu Stylistic Q584, and only the monthly plan lets you keep AppleCare+ forever as long as you keep paying. That’s attractive. Or I’m just overthinking it.

To be honest, I normally don’t get insurance for such devices but my kitty does get rambunctious on occasion and there was that video of a black kitty that looks just like mine going amok. It could happen.

If they used this in an AppleCare+ commercial they’d sell twice as many policies. S-word happens.

Unlike other recent iPads, the WiFi hotspot connection to my iPhone is always up and ready to go every time I wake the 12.9. Instant, regardless of whether the hotspot was turned on in the iPhone settings, no different from having cellular on the iPad as long as the iPhone is in range (which is always for me). My iPad mini of two generations ago did the same but that was the only other time it worked as it should. Dunno why.

Not new for the M2, but the miniLED display is astonishingly good. I mean, really good. More impressive to my eyes than the SuperAMOLED Galaxy Tab s7+ I had. YMMV.

Almost nothing that’s not made by Apple implements pencil hover yet, unfortunately. But there isn’t a shred of doubt that the app devs are working on it.

I accidentally ordered the wrong screen protector and my re-order won’t arrive until Wednesday. I’ll pick up the skin on Monday and I got my cover today. I’m sticking with the incognito composition book look. Like on my Duo. 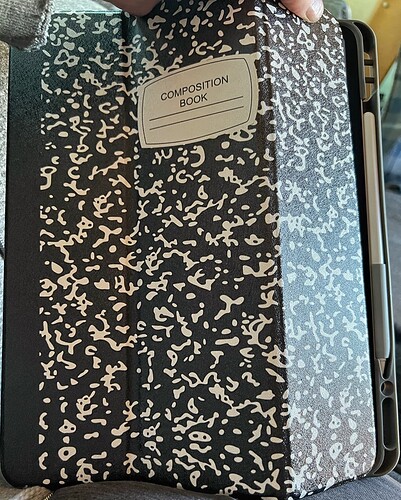 I was worried that the pencil wouldn’t fit with its added grip but the case plastic is soft and strong enough to stretch. It charges itself no problem in the slot.

I guess I shouldn’t believe everything I read on the internet. Sidecar does pass on the hover information to Mac programs and of course the MacOS UI itself. Rebel 5 works perfectly well on Ventura with an update and it has the hovering pencil showing brush size and the orientation/direction indication like it should. In other words, Rebelle 5 is fully functional, fast, and smooth on my iPP as I relax on the couch. I don’t doubt desktop CSP does the same.

@Desertlap - as well as not being an audiophile I’m also not a videophile, so I’m not entirely sure what I’m looking for when viewing Station 11. But it does look very good. Everything does. It’s hard to go back to watching videos on any of my other devices after this.

It’s subtle in some cases, but mostly what you will see is that even in the very light and dark scenes, you’ll see fine detail that just becomes essentially white or black with a typical SRGB display (the majority of laptops and large computer displays up to about 32 inches or so)

I don’t want to give away plot points, but if you stick with the show, in the middle and later episodes they are in an airport and its very high contrast shots with very light and very dark areas in the same scene and both maintain detail.

There is one other scene where they are in a field full of wildflowers and the range of colors clearly distinct from each other just clobbers most displays.

It’s been posted before, but scattered here and there, so I’ll repeat the info:

Leaving Windows for the Walled Garden - I Failed MacOS / iOS

This is where I found the item. It is a slightly softer plastic version of the original Apple Pencil tip, fits the 2nd gen pencil too. It’s not felt and has no texture. It does have slightly more drag than the hard plastic of the original and therefore a less pronounced click when tapping the screen. It works so well, I ordered a dozen. Amazon.com: MJKOR [2021 New] Soft Paperfeel Damping Tips Replacement for Apple Pencil 1st Gen & 2nd Gen, Noise Reducing Pen Nibs for iPad Pro(2 PCS) : Electron…

Apple Pencil nibs that have a better feel for writing on the screen. First reported by @Bishop

My personal pick of screen protector to pair with those nibs. Yes, the matte degrades the beautiful miniLED display visuals but also yes, it’s worth it (to me) for a stylus feel that rivals an S-Pen*. And now with Pencil Hover I’m no longer pining away for Wacom EMR. This is good.

*once it wears in a little. At the moment, the screen protector just applied, it has more friction and is more like a pen tablet than an S-Pen on glass. Edit: it’s actually too sticky—even after swapping to a fresh nib I’m getting squeaks when drawing a line. I hope iCarez didn’t change the formula for the 12.9. It was perfect on my former 11” iPP with these nibs.

Therefore it’s YMMV on the screen protector. Hopefully it’ll stop squeaking as it wears in, but we’ll see.

One thing is, since I haven’t heard any complaints, I’ve been optimistic that the M2 sensor literally has an arcade game-level of speediness and tightness to its hover detection, falling in line with that whole theme of Apple waiting until the tech is utterly mature and proven.

I can’t quite recall, but I think that all the way up until the 1st Slim Pen era with Microsoft, if you had a bit of a bad habit of flicking the pen around, it was possible to either create a noticeable delay — or confuse it so badly that it failed to detect it altogether, unless you “refocused” the session by taking it squarely out of range and then back in. I’m virtually positive this was never a problem, period, on EMR Windows devices since pretty much the earliest days.

I’ve been trying to find out if M2 with Procreate 5.3 will feature such a 1:1 hovering sync that you can see the brush shape change in real time with tilt, or if we just have to settle for the still-very-useful transparent circle allows you preview brush size, color and how it will blend.

Well it looks as though I will be joining @Dellaster as an owner of a 12.9 Pro. Due to a combination of being unexpectedly being able to pass my 11 pro to a family member, and that I’m apparently eligible again for an exceptional “employee purchase” price which that last time I was eligible was when I bought my Pro 11.

It should be here next week.

I guess I’ll see if that’s enough to make me accept the larger size over my pro 11.

One small obstacle has already come up in that it’s just a bit too big to fit in my standard equipment carry bag. To carry it, I’d have to jettison my Pro 9. That’s obviously not an option, so I guess now I’m in the market for a new bag

But boy is the screen beautiful

Congrats! Did you get the Magic Keyboard along with it? Or any kind of stand case?

I got just the “Smart Folio” in black, not by choice, but as part of the deal I got.

I had both the magic keyboard and the keyboard folio (which I used the majority of the time) for my pro 11.

I’m reevaluating my keyboard needs before I buy again including waiting a bit If I can for a new keyboard /case combo that’s incoming though I can’t reveal anything about it yet due to NDA.

That being said, like with my Pro 9, the majority of my use is tablet only anyway, so I think in the short term I can deal.

And BTW I can add another thing to the plus column for the 12.9 as Acrobat Pro with the pencil is noticeably more usable , due to the additional room.