What do people think? Loving it or so-so? My first impression was not great: you can’t customize your lock screen if it’s a picture that’s no longer in your photo library. The iPhone will dutifully show the old lock screen, but will just refuse to customize. So you’re either stuck with the new bold clock font, or you have to change your lock screen image.

Upside: it forced me to change the lock screen picture, which then demonstrated the cool image blur effect on the home screen.

Also: my location based automation of focus modes failed this morning. Hope that comes back, because I love how it usually goes into “work mode” (blocks WhatsApp and other distractions) when I get to work without any user interaction. Not a new feature, what’s new is that it stopped working.

What do people think? Loving it or so-so?

I upgraded from beta iOS 16.0 to release iOS 16.0 and got a fully functioning and fast hotspot back for my iPad for the first time since I joined beta in July so I’m loving it.

As to beta, never again!

I like 16 generally, with lots of nice tweaks to both the UI and the “plumbing” :VPN and WIFI have a bunch of bug fixes.

I am really annoyed by the default clock display. It reminds me of the early LCD alarm clocks with overly thick IMHO numbers. I do like the new wallpapers though.

I am really annoyed by the default clock display. It reminds me of the early LCD alarm clocks with overly thick IMHO numbers. I do like the new wallpapers though.

Didn’t love it either, which is how I ran into the inability of customizing a lock screen if the original picture is no longer on the phone.

For the past two main releases Apple has annoyed me by making changes that require user interaction to undo. I’m OK with new features, but don’t make me study the user manual to get back where I was!

Case in point: how they introduced the new focus modes last time (disabled the standard DND, causing me to wake up at 1:30am, thanks Apple), and how they changed the lock and home screen this time (notifications suddenly bundled uselessly at the bottom, a pointless “search” box on each home screen).

I get that you want to show off new features, but there’s got to be better ways than annoying the cr*p out of (part of) your user base.

Wow, I thought I was doing something wrong, but boy did they mess up notifications. (edit: updated to reflect my better understanding).

If you swipe down from the top left corner, you might see a blank lock screen, if you only have notifications that once showed on the screen. You then have to swipe up to see notifications. So: notifications become hidden by default even if you didn’t actively dismiss or open them.

If you choose notification style “list”, they still don’t actually always show as list on the lock screen. New ones will, but you have to swipe up to surface any of your previous notifications if they once were on the screen.

Macrumors posters aren’t loving it either: 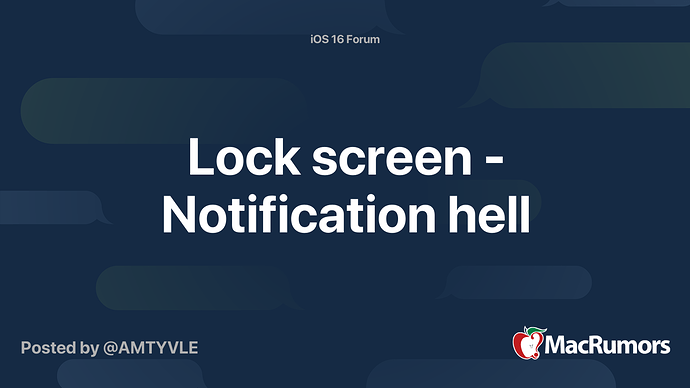 Edit: and of course Reddit has a complaint-filled thread about it too:

Well, I hadn’t really paid much attention to lock-screen notifications, but you are right they kind of suck.

Coincidentally we had several employees come to our help desk yesterday wondering why they weren’t getting the new features of IOS 16 and still seems to be on 15.

Turns out they actually were and had updated to 15.7 instead of 16. When you go to the “check for updates” function, 15.7 is actually the top option and if you weren’t paying close attention, it would be easy to select that instead of 16.

Maybe somebody at Apple actually knew that the new method for notifications would be controversial?

OTOH I am really liking the dynamic island (though not so much the name) and finding it quite useful. Though I have observed that the iPhone 14 pro is now more distracting sitting on a desk with that in combo with the always on display

OTOH I am really liking the dynamic island (though not so much the name) and finding it quite useful.

Yeah that one looks fun. Doesn’t work on older models unfortunately (like my 12 mini). I do like the focus-bound lock screens, and I finally have set up a focus bound home screen. So now my phone is supremely boring and functional at work.

The notifications are still unclear to me. Initially even when I swiped down from the top left corner they would be hidden, forcing me to swipe down and then back up, even when I had the style set to “list”. For whatever reason now they already show when I do that pulldown. I very much hope Apple will add a simple toggle to have them show at the top by default on both the notification center and the lock screen.

One funny partial workaround is to assign “back tap” to the notification center (settings>accessibility>touch>back tap). That does actually show everything at the top. Not a real fix of course, because now instead of two swipes you have to do two taps.

I think that’s possible. Looking at our lab iPad Air running the 16 (not 16.1) beta, notifications are an even bigger PITA…

Perhaps enough will gripe/submit is as a bug that Apple will at least give the option.

Perhaps enough will gripe/submit is as a bug that Apple will at least give the option.

It definitely seems to be the number one complaint so far. I’m sure they’ll be looking how long the backlash lasts. They must have though the new options are “better for us”, so I doubt they’ll immediately change course.

For people who never customized notifications the new way might be an improvement, but as someone who has carefully minimized all notifications, I didn’t need iOS to make them even less visible. Here’s hoping for a new settings toggle in iOS 16.2.

It is a two-fer: Apple and Timmy grossly OVERPROMISED, and I am phenomenally UNDERWHELMED.

Those 3 pitiful little lines of lock screen widgets take more time to set up than they will ever convey in information, and all are still limited to Apple spedific items. About as useful as a full spittoon on a hot day.

And I still dutifully set them up, and even different ones for different focus lock screens. FML!

And then there’s people like me who have had the new lock screen since July in beta and I have never touched the adjustments. I haven’t even looked at what’s offered. It’s just a non-interesting feature for me. I just change the photo on the lock screen and I’m done forever.

I updated my earlier complaint, because I finally understand what they did with notifications.

First, they have different grouping options for the notifications, starting from the bottom of the screen. Fine, don’t love it, but it’s OK.

Second: any notifications that have seen the light of day (screen on, possibly with the user looking at the screen) will automatically be hidden once you lock the screen again. It’s like an “auto mark as read” once they’ve been shown. These older notifications are entirely hidden from view, and you can only resurface them by swiping up, at which point they magically reappear.

Finer point, if you swipe up they will stay up, until the next time you lock your phone. Lovely, just perfectly intuitive. /s

So I have one gripe/annoyance that seems to have become more prevalent with IOS 16 onward which when using an iPad with an external display, mouse and keyboard and using Safari or any of Apple’s iApps, its far too easy to overshoot when you move around the top of a page and bring down the task bar.

Ideally I think Apple should have a setting(s) that would let you customize the “zone” or possibly offer another option to pull down the taskbar.

Looks like Apple is at least going to address this particular problem. 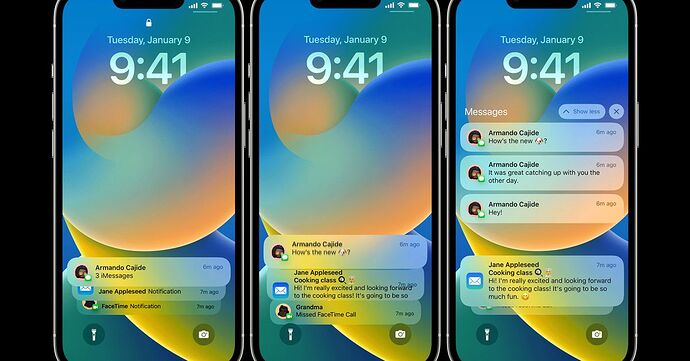 Now one swipe is enough to see all your notifications in the latest iOS 16.2...

Scrolling Notification Center will be a bit easier in iOS 16.2

Unfortunately it looks like we can still have a blank lock screen even with a ton of previously ‘seen’ notifications hidden behind a swipe-up gesture.

Yesterday for the first time I tried to use an external monitor with my M1 Pro 11 for mixing of a hobby music project in Cubasis 3. That attempt lasted all of three minutes.

On the positive side: the iPad was able to put a non-distorted view of the app window on my 34" monitor, that’s pretty impressive. Also: without any extra work on my part the mouse and keyboard that were connected to the Anker 11-in-1 USB-C dock worked perfectly fine.

And now the not so great: the display would regularly black out, maybe because of issues with the USB-C dock. But more annoyingly, Cubasis doesn’t (yet?) support extending the window, so I couldn’t actually use all that real estate. And worst: I could find no mouse/keyboard combos to zoom the track view in Cubasis. Are there universal zoom shortcuts on iPads?

Long story short: the advantages I was hoping for on the external monitor didn’t work yet, likely due to Steinberg not having put in the effort to make Cubasis work optimally on external monitors.

Long story short: the advantages I was hoping for on the external monitor didn’t work yet, likely due to Steinberg not having put in the effort to make Cubasis work optimally on external monitors.

That exactly what we think generally about most of the third party apps; they need to be updated to deal with anything other than the previous standard iPad resolutions and corresponding aspect ratios.

On the bright side, it should get rapidly better since IOS 16.2 and MacOS Ventura, the display management and control are on the same code base which is why for instance 21:9 works on the major player displays such as Samsung and LG

PS: The “blacking out” on your ultrawide could be one of two things. Old firmware, or possibly an incorrect setting in the display settings of the iPad that allows the sync to vary. So far at least in what we’ve seen even displays with variable sync rates such as those that use AMD free sync or Geforce GSync dont often work and the setting is best left off.