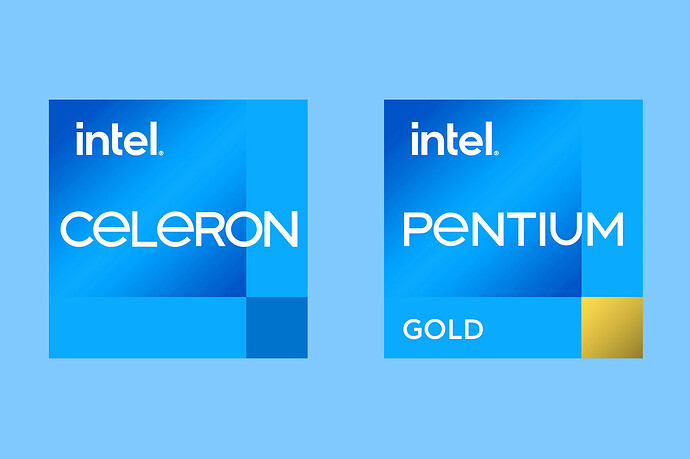 Intel is killing off its Pentium and Celeron brands

Intel has announced that it's killing off its entry-level Pentium and Celeron branding, replacing it with Intel Processor branding.

Those will be replaced by generic intel branding with 4 number digit. This feel so much like the dead of Atom, where they just rebranded it as Celeron for price up with just a little performance gain that seem had more to do with higher tdp than more power efficient design.

I can now imagine all those bad talker used to say " Celeron is sht" switching to "Intel is sht" with this move. A 4 number digit separater won’t help user understand that it’s a budget line of chip, just associate the bad performance with the Intel brand and further confuse the average people buying new computer.

Intel should really stop trying to erase their mistakes and works to improve the power efficient of their lower end line-up. But obviously their current priorities is hotter, higher tdp core i9 series with massively high performance that the average population of pc user likely won’t need.

So intel’s naming scheme generally is getting worse, but I think this specifically is a good thing simply for the reason of perception versus reality. We have customer in our base that won’t even consider a Celeron or Pentium regardless of application based on mid 2000-2010 reports of performance. (For instance, some recent higher end Pentiums hit performance levels comparable to sixth or seventh gen Core I)

If nothing else, it will cause some users to actually look at the performance instead of making blanket assumptions.

I’m still annoyed with the mess that is the core I at present. It used to be logical and simple. core I3; typically 2 cores and no turbo, core I5; 2-4 cores and turbo, and core i7; four or more cores, turbo, best performance.

But now with Intel seeming to want to offer every TDP imaginable, all most users do is get confused… is a 15 watt TDP quadcore chip faster or slower than a 25 watt TDP dual core…

I always wondered whether Intel was trying to establish retail consumer demand for branded chips (like US automakers did with engines - see, e.g. the “Hemi”), or whether it was just trying to court the internal engineers that made component decisions at OEMs.

From where I sit, the current move sheds no better light on the strategy.

But now with Intel seeming to want to offer every TDP imaginable, all most users do is get confused… is a 15 watt TDP quadcore chip faster or slower than a 25 watt TDP dual core…

How much of this proliferation of SKU’s is intentional or driven by binning chip output?

Virtually zero. It was never widespread to begin with, despite the mythology that some believe, with the most recent likely being on the graphics card side of things, and even there it was reserved mostly for 3rd tier manufacturers.

A common misperception is that say a 15 watt TDP Intel Core I is just a down clocked 45 Watt part when in reality they are quite different both in the number and configuration of transistors on the dye.

These days, claims we hear of it being done are tied to various conspiracy theories.

I thought it was pretty common knowledge that Apple is binning the base SKU’s of the M1 MBA and M1 Pro MacBook Pro 14?