I dont know about having half of the folded display as the back of the phone but the elimination of the third screen has to be a design plus. Huawei Mate Xs 2 smartphone has a single foldable display that wraps around the front and back - Liliputing

Agreed, it would resolve many of my biggest gripes about the Fold 3, and why I’m now using the S22 Ultra

Im dying to try a fold but I’m not buying Huawei and Samsung’s Fold 4 is not likely to tempt me. Something like this might. Is there room for a pen in there?

“Hello, 2018? We have a folding smartphone you left behind…”

Royole could be the first company to release a foldable smartphone

The FlexPai is being manufactured by Royole

The thing I"m interested in most from an engineering standpoint is how they are protecting the most vulnerable to damage part of any foldable display which is where it actually bends.

And it seems to me that the potential for damage is magnified quite a bit since when it’s folded it’s one edge exposed at the bend point, not to mention that it would seem to be the most stressed in that folded position.Samsung mitigates that to a large degree by having their Fold 3 fold inward.

And it seems to me that the potential for damage is magnified quite a bit since when it’s folded it’s one edge exposed at the bend point, not to mention that it would seem to be the most stressed in that folded position.Samsung mitigates that to a large degree by having their Fold 3 fold inward.

Indeed, that’s the big question. The design has been tried before (Huawei finally got theirs out after many delays, didn’t they? And it flopped hard.). And none have caught on yet (which was the point of my previous comment). I guess we’ll see. I do recall that the tech press adored Huawei’s take on the folding phone at CES 2019, which made me scratch my head. Samsung’s Fold always made more sense to me. 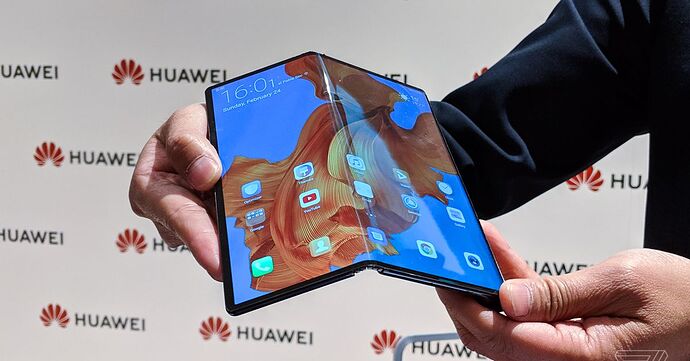 Huawei has the best first draft for a foldable phone

The Mate X already looks like a polished and mature design

P.S. I might bite when the rollable screen phones come out. Looks like a regular smartphone and you can pull a slide to expand it horizontally to almost double the size.

Looks like a magnet for scratches at best. Which would be fine enough if there screen protectors that could stay on, or you know, any display materials weren’t prone to scratching.

Yes again another specific concern I have for the edge especially. I know that on my own devices , scratches appear first on the sides and edges of my phones first , no doubt from repeatedly going in and out of my pants pocket.

Try living in the US southwest where nano sand bits coat everything, which transfers to your fingertips, which then become little sandpaper pads as you use your touch device.

Nope, that design seem to be waiting for a scratched / cracked screen. I have keys in my pocket sometime, and dropped phone always land on the edge. Unless I don’t treat it like a phone and keep it in my bag like a tablet, and there’s no longer a point to get a foldable device.

The z fold and z flip is a good design to keep the screen safe. I probably wouldn’t be worried about putting keys inside if I had a z flip. My co-worker actually chained her keys to her z flip.