We saw an engineering prototype of this a couple of weeks ago. This is hands down the most impressive looking Chromebook we’ve seen.

But oy vey, the price…

I also agree with the author that besides the price, Chrome OS itself is the biggest barrier to this device’s bigger success.

The conundrum for Google I think is how to maintain the simplicity that is much appreciated by many users (education is top of mind) which could in be jeopardy if they implement some of the requested enhancements I’ve seen. 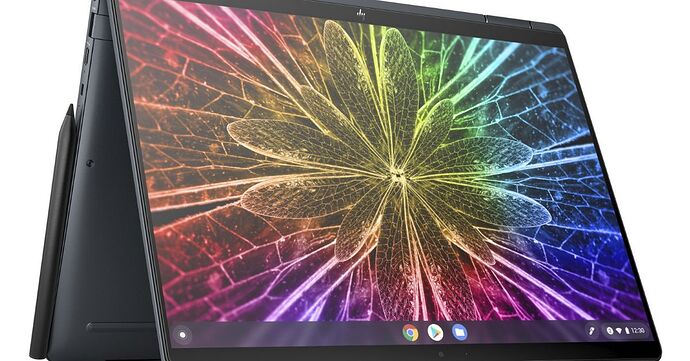 This is the premium Chromebook’s biggest test

They all started out as low cost alternatives primarily geared towards the educational market, right? Probably difficult to change that mindset this late in the game.

Yes and that has been by far their biggest market to date though as a side effect of the Pandemic they have made some in roads in the corporate market in the last 18 months primarily via “work from home” initiatives.

And going off topic

what’s the pen on this AES, USI or MPP?

That is a ridiculous amount of money for a Chromebook.

USI. Not sure if it was 2020 or 2021, but all Chromebooks if they support a Pen have to support the USI standard. Which is kind of a double oxymoron at this point as USI is far from universal or standard to date.

How does USI compare to N-trig/MPP & Wacom AES?

IMHO it’s still got a ways to go compared to either. It’s got relatively low latency generally , not as low as the latest EMR but not as much as some of the lower end MPP implementations we’ve seen.

My biggest complaint at the moment is that support for it is very inconsistent in Apps and even in a few places in Chrome OS it’s absent (like in some of the system settings ).

It’s got promise and as of now anyway the licensing on it is free so it should get better quickly.

That being said. hands down the best pen isn’t from any of the OEMs it’s this one. It’s highly compatible, though it is a tad slippery in hand, to me anyway.

So one last comment on the Dragonfly Chromebook . I actually got to use one for a couple of days last week due to the generosity of one of my customers, and HP.

And to paraphrase Ferris Bueller, " If you have the means, I highly recommend it". It is hands down the nicest Chromebook I’ve ever used and for that matter is right at the top in terms of PC type devices generally.

And if you are the type of person that like to try and impress techies, this is one device that seems to get the job done, at least at a couple of Starbucks in Silicon Valley, I visited last week

PS: And for those that know me, I couldn’t resist testing the display, and it’s terrific in every way including being quite accurate out of the box, which that alone earns major brownie points.

An Acer Chromebook Go? Pen Silo in a 10" tablet? Should have had an 8cx Core.

So I got to spend multiple days with this last week.

I do wonder how well something like this will sell, even in business given it’s sky high price. It has a great design, and hands down the best display you can get in a chromebook. But man, the price.

OTOH it can run several flavors of Linux as well so if you are a hardcore Linux user, perhaps it’s at least a possibility.

BTW: I did get to see the 1000 nit privacy screen version as well. It is eye searingly bright, but the overall quality of the display is a couple steps back of the standard display

I did get to see the 1000 nit privacy screen version as well. It is eye searingly bright, but the overall quality of the display is a couple steps back of the standard display

Its a shame. 1,000 nits is about the minimum threshold for outdoor viewability IMHO.

Yeah unfortunately it’s still a truism that the brighter the overall display, the more it will suffer in other aspects, usually color accuracy and linearity.

The level of sunlight that requires 1000 nit to be viewable shouldn’t be the kind of place you can safely sit at for long ( or opening a laptop for that matter). I also would be wary of the heat such bright screen would generate, while the bright sunlight also shining directly at it.

I agree, but there a few major impediments to such a device right now.

Don’t get me wrong, I’d consider one myself, but I’m part of a niche of a niche I’m afraid

I actually have both. I use my eInk display for most basic reading chores outside but there are times when I need a computer. The Go2 's 400 nits display is marginal for work out of doors. I work on my deck. There is no direct shade, so I have to keep the sun at a reasonable angle in order to keep the display readible. I have only run into heat issues once, when the unit overheated from the sun. I think it was 95+ degrees and 99% humidity (Jersey in late July). The metal got pretty hot from the sunlight beating down on its metal skin. I need a Cinzano umbrella for my deck.