MacOS while keyboard is attached? Hmmmmm.

Now who suggested that before???

But that is a MacBook, not an iPad… 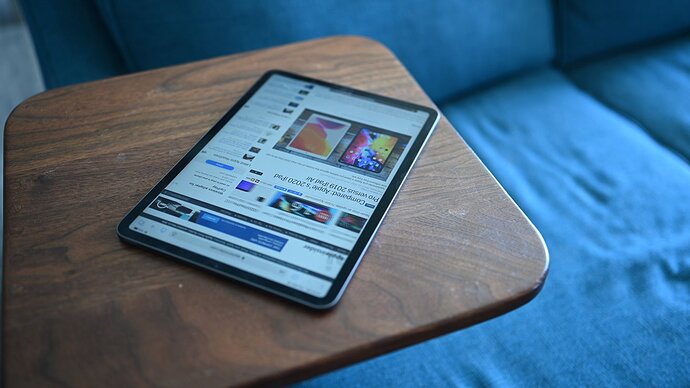 Rumored 14-inch iPad may not be an iPad Pro after all, analyst claims |...

Display analyst Ross Young has walked back rumors of a 14.1-inch iPad Pro, stating that the supersized tablet would be a lower-tier iPad model without ProMotion or a mini LED display.

If it’s only slightly more expensive than the normal 10.2" iPad, I would likely give it a go. I have no need for Promotion or miniLED or all that bell and whistle anyway, and might work with my Pencil 1 so I might not need to buy another one. Hopefully they would go with USB-C 3.0 instead of lighting port or it would be a deal breaker.

Doesn’t really make sense to not give it a M1 chip considering the new iOS 16 features though, but at that point it should be at least more expensive than the air.

Thinking of my own usage of the 12.9 iPad Pro, which was predominantly for Sidecar till recently, I would view a 14-ish inch iPad for the same relative value of using it as a 2nd monitor.

Aspect Ratio Aside, the 12.9 inch IPad pairs perfectly as a second monitor with a 13-inch Macbook Air or Pro.

A larger 14-ish inch iPad would be an ideal 2nd monitor for the larger Macbook Pro 14/16.

While this would be awesome for drawing and artwork, its size could be problematic in some use cases. I use my 12.9 iPad Pro for life drawing classes where its 12.9 size is barley too large for instances where I have to hold it one handed while I draw. Unless I have a desk a surface to put it on, a large 14-inch size iPad would be almost too large I fear.

Struggle to see the use for a 14 inch iPad (and not a Pro) unless its big focus is content consumption and some form of device to get Apple TV on.
Putting an M2 chip in there seems to confuse the lower end market too unless the iPP and Air get much more powerful M2 processes pretty soon after it.

Now if Samsung produce an S8 Ultra sized FE device, I wouldn’t hesitate to buy it because no Apple solutions beat Android SuperDisplay.

This iPad is going to be a desk bound device for sure, but the only second screen for Windows app that’s decent enough is Easy Canvas, and it’s still a notch below SuperDisplay + doesn’t work with AMD CPU.

And I still find the M1 over power for most of iOS app. Except for the iPad OS 16 exclusive features, the normal iPad would just need some RAM bumps to do most of the things an iPad Pro can do. Still the 14" should at least have a M1 or it would be a waste of screen space.

I just think it either needs to come out when the other M2 iPPs come out, or they need to be clear that it’s coming later as a courtesy so that no one gets the 12.9 assuming it’s vaporware.

I know you don’t shoot the messenger, but the rumor mills are infuriating lately. Neither the 11” Pro having a basic 4-year old Liquid Retina in 2022 nor the 14” being a basic iPad with some sub-120hz LCD makes any sense to me.

I’m probably becoming such a snob but if they made the 14” like that, then what good is it? A kitchen display for smart homes?

then what good is it? A kitchen display for smart homes?

Strangely, I think it’s possibly going to make a strong link to Apple TV and be exactly that - a portable SMART TV that doubles as an iPad (if it is just a huge iPad and not some Pro model.)

We always read that Macs are no good for games / Apple are very snobbish about making computers that are for gaming but then they made over $14billion in revenue - more than Microsoft / Sony / Activision AND Nintendo combined. (Yup - got that from Apple Insider.)

We had an Apple Arcade account recently and you think £4.99 isn’t much but when lots of households do it - there’s money to be made. Apple have also been exploring Apple TV and if they make half the yearly revenue from gaming and use a large iPad / SMART TV to help break that market it makes sense.
As an artist - yeah, I’ll grumble but I’m part of such a small niche compared to the majority of buyers.