MEA CULPA for posting ANYTHING here today before thanking our veterans not only for their service, but the sacrifices they and their families have endured to let a poor schlub like me enjoy this wonderful nation we we all share.

Yes! A resounding moment of gratitude to the servicemen and women who have proudly served America throughout its history. Freedom is not free! It is the land of the free because of the brave who made it their home.

Here is my favorite picture of veterans. It is a photo of a platoon from Love Company of Patton’s 3rd Armored Division of the U.S.'s 7th Army drinking Hitler’s private stock after capturing the Eagle’s Nest (incorrectly credited to the 101st Airborne in Band of Brothers) after surviving every major battlefront of the second World War. These guys look happy to be alive. Just imagine the things they’ve seen and felt. 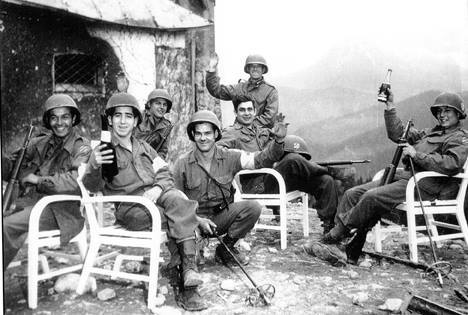 I’ve talked to a lot of WWII vets over the past 20 years (when the CAF moved its WWII Airpower museum to Midland) and to a person they agreed that saving Private Ryan and Band of Brothers were the CLOSEST representations of WWII ever (save for the the plot enhancers like the 101st taking eagles Nest). In fact, one of my partners father had to leave the theater during the beach landing scene in Saving Private Ryan because he was experiencing it all over again.

I’m surprised there are that many. They all must be around 100 by now. And, at the rate they smoked cigarettes …

My dad joined the service at the end of the war, but by the time he got orders to deploy, the war in Europe was over.

I’m surprised too, but I think these folks are the last of the “cheaters” who lied about their age when they signed up - my wife had an uncle who got in at 16 and vets I’ve talked to said “some big 15 year old farm boys” slipped through too. Even then, if you were 16 in 1945, you’d be 93 today…