Google is still not getting it yet on tablets

Mini rant for a moment.

For our test lab, we purchased both a Samsung S22 Ultra and a Samsung TAB S8 +. Both are on Verizon. The S22 Ultra has been getting at least monthly, sometimes more, security and/or OS updates while the S8+ has had a grand total of two, with the last being in April.

Now if you were a customer that bought both devices, you’d have to be wondering why, given that they are both 8c gen 1 devices, running Android 12 why that would be the case. What would the phone need that the tablet doesn’t?

The answer is nothing.

And it’s not a carrier thing either as we’ve noticed a similar issue with the S21 and the Tab S7 (both unlocked)in that the S21 get’s monthly updates while on average the Tab S7 gets an update roughly every three months.

Then you compare it to Apple where other than hardware specific fixes such as a recent one of the iPhone 13’s cameras, IOS updates come at the same time and with the same frequency on both iPhone and iPad.

PS: I’m picking on Samsung a bit here, but if anything they are by far the best of the lot. Lenovo, some of who’s latest hardware I’m very impressed with such as the new Tab P12 Pro, is by far worse, with one of tab ms only getting two updates in the 16 months it’s been on our test bench.

Microsoft are the best for updates of the big tech companies with consumer/small business oriented OSes, even if they do go and meddle with the UI without anyone asking them too.

Agreed to a point. On the OS itself most definitely. Patch Tuesday as annoying as it is to IT directors with large fleets of systems, is regardless at least predictable and thus plan-able.

Apple could do better here especially on the Mac side of things where they seem to wait and “bundle” fixes in Mac OS update, and even then tend to hold them to coincide with an IOS update.

OTOH, where Window totally falls down is that absolutely random approach to device specific hardware in the OEMS. HP is the easy whipping boy here with HP qualifying hardware patches typically three plus months after the actual hardware maker releases and update.

Most notably, recently with Windows 11 and Spectre and Envy systems where when customers updated from Windows 10 to 11 would get blank screens intermittently , especially if they actively used two browsers.

The root issue was a bug in Intels initial XE graphics drivers for Windows 11. But Intel actually had a fix for it in mid January whereas HP only started rolling out the update drivers via their software update , late last month.

Far be it for me to be on Google’s side, but isn’t the situation kind of like if HP, Lenovo, Asus, etc. all had their own UI fork for Windows and had to modify it for each Windows update before it got to the end user? You might buy a Chuwi or something and never get updates.

That’s part of it, mostly due to the IMHO unnecessary level of skinning that most do on the UI to make it a Samsung or a One Plus or whatever.

But I was calling out the case with the same manufacture of both a phone and a tablet where the “skin” is more or less the same. That’s what still mystifies

Should I feel bad for keep detering update in fear of it breaking my app setup?

But I think Samsung is more speedy on phone security updates because people are basically using their phone as their wallet. Smart pay, E-wallet, contactless payment is becoming a norm, and cyber crime come with it, so patch being pushed out more frequently is necessary.

Tablet is more used for work and entertainment , but you don’t usually see people holding up their tablets to pay at stores, so it’s probably second in priority and OEM let it accumulate to update less often. I would be annoyed if my tablet update every weeks ( same annoyance with windows update), and I’m fine with update every 4-6 months.

That’s a good point and I know many who do the same as you. OTOH isn’t it a sad commentary on the state of OS and app updates that you feel justified in doing that ?

I guess because I mainly use my tablet / PC for creative work, I don’t keep sensitive, payment information on them. My important works are backed up to the cloud, so what I need more is a stable system, not new bell and whistle that reset my settings and break my system every few months.

And security update Android usually tighten restrictions or even remove permissions, I’m worried it would block the apps I’m mainly using. The recent scoped storage enforcement update already limit a lot of freedom on how I can access/back up my art files. If display over USB ( SuperDisplay) ever get limited, my tablet would become half as useful as it used to be.

But I was calling out the case with the same manufacture of both a phone and a tablet where the “skin” is more or less the same.

Yeah, and what I’m not getting is what Google can do about it.

Have stricter certification requirements for google support. They can’t stop someone from just loading the the OS (cough Amazon) but they can and do withhold the play store and google apps.

That’s why by the way, you don’t see any intel based Android devices anymore.

… they can and do withhold the play store and google apps.

So, “do updates the way we dictate or no Google stuff 4U!” It would be interesting to watch how that played out. (As someone with no Android anything.)

Or they could go even farther like they do with Chromebooks. They didn’t do that originally with Android, but that was then and the world is much different now, with security for one thing being far more important.

I agree google should do better, but I also think Apple can do a better job too. Like move some updates, like the one to the camera, to software updates like google does. Why is an OS updated needed to for the camera? It’s not like this updated was tied to the OS(at least what apple people tell me).

I agree. none of them are at at the level of even adequate, in their approach to all of this, and don’t get me started on security and vulnerabilities.

Unfortunately I think the whole industry has taken Zuckerburg’s “move fast and break things” far too much to heart.

They really have. Though maybe it’s just me, but I feel MS is a bit better about it than the other two, but that’s not saying much.

Last night my Galaxy Tab 6 Lite updated to Android 12. Haven’t had the time to go through all the changes yet, unlike iOS Google don’t provide a nice little What is new tutorial. But so far I have to say that I’m enamored by the little navigation bar at the bottom. It holds potential and I’ll probably look at some tutorial YTs later today. Any tips from those that already have the update?

Figured it. You don’t swipe from the bottom anymore but an inch up from it. Strange but I’ll go along with it.

I agree with you that the navigation bar is a nice addition. But I would appreciate to have the chance to move it to the top because it is easy to accidentally open apps when sketching/taking notes (edit: the same problem as the navigation bar of Windows 11; I’m afraid current OS designers don’t think much about pen users). As a result, I almost always have to keep it hidden.

By the way, with the Samsung S8 the way of hiding it is long pressing the thin bar located below the navigation bar.

My guess is that it will come in a later upgrade. I can also see a new iteration with a scrollable task bar.

The old Fold bar was to the side and scrollable, and the Good Lock taskbar was scrollable too though lonely lists recent apps. 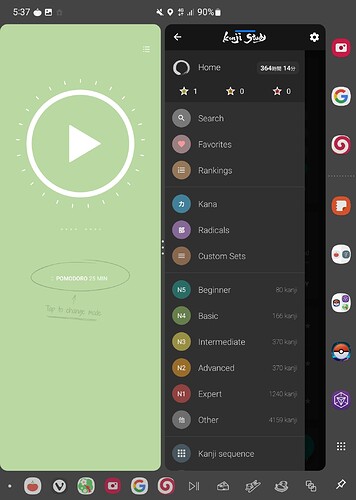