Hello.
Bought 2 of them. Both have styluses like Wacom ones. They looks like this one https://cdn11.bigcommerce.com/s-wj6toq7h0u/images/stencil/1280x1280/products/185/1288/GMPDX4-2__02164.1598705655.jpg?c=1. Both tablets have stickers on the back side–“Stylus drawing a line”.
But none of them work with those styluses. Windows 10 also says-- “Touch support 10 points…” And nothing about pen.
Most drivers installed.
There are some video where a F110 works with a stylus-- Uso Digitizer Pen button Getac Tablets - YouTube
Wacom styluses also don’t work with those tablets.
Any ideas? What wrong with them?

Interesting, it’s been a while since I heard the name Getac on here! I forget, are these Wacom based? If so, could it be AES meaning the pens need a battery or some charging cradle? Other than that it could be a driver issue. Not sure if there were any F110s sold without the digitizer in the screen.

The pen design remind me of EMR pen, but none of the EMR tech I known of , Wacom or Chinese one, has that terrible hover distance.

Could be the video angle, but the video felt a lot like one of those Chuwi / Cube Chinese homebrew Goodix AES digitizer. The lack of hovering cursor, and require contact to get the cursor to show up looks a lot like it. But the pen doesn’t seem to have a charging port or big enough to have swappable batteries.

It could also be Hanvon, which is a Chinese EMR tech I haven’t experienced.

To be sure, check in the device manager to see which pen input driver it used. Wacom usually is “Wacom Device”, Goodix might show Goodix name, or the source of the driver might show up in driver properties. Try indentify “Wacom”, " MPP", “Goodix”, “Elan”, “Hanvon”, " USI" or something that sound like a manufacturer in the pen driver properties.

If it wasn’t AES and Wacom EMR pen doesn’t work then your chance of finding a compatible pen seem slim, because Chinese EMR pen tablet are usually very rare and nondescript to find alternative.

There is no charging port in styluses. I’m pretty sure they have no batteries. I can broke one in half but it’ll be a waste.
The problem is Windows doesn’t detect any pen-input. So I doubt there will be some “pens” in Device manager.
I have an another one (an unbelievable bad DT-Research with E-Galaxpen input (but it came without a pen) and Windows detects pen input in this one. Getac styluses don’t work with it also).
Tried to install Wacom driver–nope, it doesn’t want.

If Windows doesn’t show pen in the system, chance is hardware defect. I once bought a refurbished tablet with Wacom, the first unit was unresponsive to pen without any pen system information, it was confirmed to be defective and replaced. But having both device defective is just too weird.

Can you take a photo of the sticker that show pen support? Windows is usually very good at detecting pen support even those obscure Chinese on without driver. It’s either not supported, defective, I’m not sure if it’s possible to disable at the bios level. Did you try clean install the tablet? 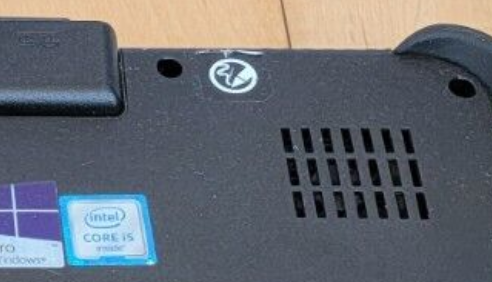 If it’s so, then high chance this tablet doesn’t support active pen and the sticker is misleading. Or the sticker was meant to be something else.

Looks like. Got an another one–the same. Those stickers is something else.